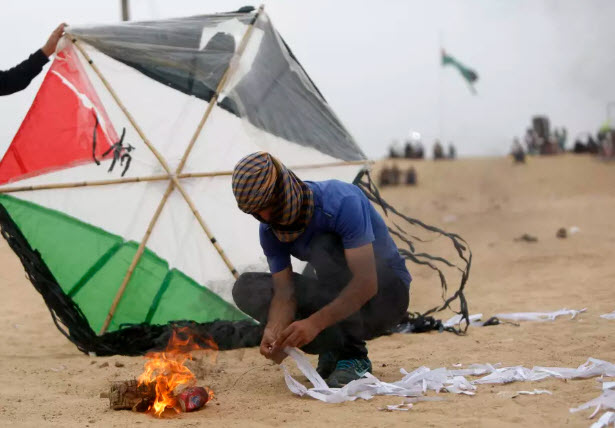 Imagine for one moment tens of thousands of acres of French, Russian, American, Egyptian, or whoever’s farmland, forests, nature preserves, property, and lives deliberately being destroyed or targeted by neighbors sworn to their destruction by any-and-all means possible.  Next, imagine that those neighbors, when not firing rockets, mortars, and missiles across the border, refuse to cease this new type of terror activity using often explosive, flaming terror kites as well. The only solution they will accept is your (and in Israel’s case, yet again) final solution.

Now, what might an acceptable response to such murderous intent be–especially when world bodies such as the United Nations basically ignore it (as happened again in the latest June13, 2018 UN condemnation of Israel for its defensive actions in Gaza) and wind up blaming the victim instead?

Predictably, taking cues from such hypocrisy, Hamas and its allies have next promised to launch thousands of additional incendiary kites into Israel as they attempt to storm the border to mark the end of Ramadan’s Eid al-Fitr’s celebration the following day–June 15th this year.

I wish it had not come to this, but the Hamas zebra does not change its stripes (and not that Fatah’s does).

If those thousands of kites are launched, and Israel’s border comes under attack, with Israeli civilians just yards away from getting their throats slit or the like, Israel must ignore duplicitous critics who would not drop leaflets of warning nor carefully use snipers to pick off the main actors hiding behind women and children human shields, as Israel has done. Instead, war would be waged against such a murderous, rejectionist enemy to protect life and property, as best as possible, with gloves removed and without one hand tied behind the back as Israel is routinely expected to do.

If the planned Hamas Eid al-Fitr acts of war are carried out, Israel must launch repeated air assaults against large concentrations of Hamas fighters (especially targeting top brass)–not just fields or empty buildings–as would be found in physically-occupied training camps, rallies, demonstrations, parades brandishing weapons, and so forth. If the Mossad can make off with a half-ton of top secret Iranian nuclear documents, then it can plant major explosives in areas frequented by such Hamas kite producers and set them off when the time is ripe.

The attempted murder and massive destruction of Israeli farms, forests, buildings, individuals, schools, etc. must henceforth come at a very costly price to pay. And with each new terror attack, the cost must seriously go up…seriously.

If it does not agree to be a perpetual victim living in constant fear (the very point of terrorism), then Israel needs to deal with such a rejectionist enemy the way any other nation would have done. And I wish they had done it hundreds of dead and wounded loved ones earlier.

There’s something to the saying, “actions speak louder than words.” Israeli spokesmen need to ponder that bit more than they have. So far, Hamas has actually paid a very low price compared to what it should have for its constant assault, since Passover last April, against Israel’s Gaza border in an attempt to slaughter Jews just on the other side of it.

What’s needed now is a dose of that old time Israeli pizzazz…a hint of which took place in Iran and against multiple Iranian targets in Syria just a bit earlier. Again, think erasing much of the Hamas top brass almost simultaneously, for example. There’s nothing to lose here. Will the United Nations, the Arabs, and so forth be upset and enraged?

So, what else is new?

As for America–perhaps the most important player in all of this–I believe the new administration in Washington, unlike its predecessor peas in the Obama pod, truly understands what the real story is. Imagine having Obama’s UN reps, Samantha Power or Susan Rice, facing Israel’s one-sided attackers in that world body instead of Nikki Haley.

To better see that this more effective message is received, besides cutting off the heads of the snake, Israel needs to eliminate would-be, Jew-killing, Hamas foot soldiers to the point that there is a shortage of virgins awaiting them in Paradise. Or find a way to deter them.

As for possible civilians who might be inadvertently hurt, if hundreds of Jewish civilians, recently and in the past, could be deliberately and wantonly targeted and slaughtered, then what’s wrong with payback for their actual and wannabe murderers? Years ago, President George W. Bush warned America’s enemies that those who harbor and collaborate with terrorists will share their fate. Why is this proper for America but not for the tiny nation which has been the most victimized by such barbarity?

Many, if not most, Arabs, along with many other Muslims, have said that they would reject any Israel, regardless of size. Even the latter-day Arafatians in suits of Abbas’s “moderates” have called the Oslo Peace Accords, other “peace negotiations,” and so forth nothing more than “Trojan Horses.” At least the Hamasniks have been honest… Thus, a 22nd second state for Arabs–most conquered and forcibly Arabized from other non-Arab, pre-Arab, native peoples–is justice.

One minuscule, resurrected nation of the Jews, where they have thousands of years of continuous history, however, is not. Such is the Arab mindset–the same one that calls the potential birth of a state for some 40 million truly stateless folks–the Kurds–“another Israel.”

If Israel truly wants its message to sink in, it must consider the numbers game much more. Putting it bluntly, the Israeli response must be exponential…yet again, carefully targeting combatants as best as possible–unlike the Arabs’ own preferred victims, Jewish civilians, for shock value.

Nice guys finish last in this region where the strong horse is the only one respected…especially when your real and potential enemies vastly outnumber you.

In the past, Israel gained no acceptance by trying to do this the “right” and “moral” way.

While dropping leaflets warning non-combatants to get out of the way (thus telegraphing its punch and losing the element of surprise), going house-to-house, deliberately putting its sons in greater harm’s way going after the rats in their dens, it was accused of massacres and such anyway. It even got taken to court for building a barrier designed to protect its kids from Arab decapitators and disembowelers.

Arabs dealing with their own “headaches” blasted masses from afar…no snipers carefully selecting individual targets or aiming at non-lethal body parts as the Jews have done. That’s why–despite the scores of thousands of civilians and organization members Hamas has thrown at Israel’s border with the intent to invade and kill–less than two hundred attackers have been killed so far. For comparison purposes, Assad Sr. killed some 20-30 thousand Sunni Arab “problems” in just one month in his famous Hama Solution several decades ago, and Assad Jr. is current proof that the acorn does not fall far from the tree.

The Geneva Conventions specifically state that combatants cannot use their civilian populations as human shields…something Arabs do all the time. Notice the Arab mothers with babes in arms bussed to the Gaza border with Hamas fighters interspersed among them. And those Conventions also state that the presence of civilians does not eliminate going after legitimate military targets. Any “innocents” killed have their own heroes to blame.

So, Israel must do what it must do–and in high gear, full speed ahead.

After dishing out a few rounds like this, again–where each Arab assault is followed by using an exponential Israeli version of America’s own “Powell Doctrine” (i.e., unleashing overwhelming force upon the enemy) –then Israel can step back and let the dust settle—and later up the ante further as need be.

EMET Webinar: Military Challenges for the US and Israel in the Middle East – with Clare Lopez & Shoshana Bryen

From “Defund the Police” to “Defund Israel”

My interview with Hamas. It gets crazy!