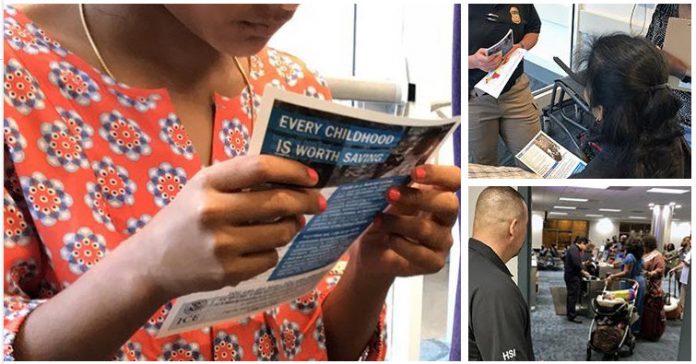 Source: Immigration and Customs Enforcement, May 23, 2018

ATLANTA – U.S. Immigration and Customs Enforcement (ICE) Homeland Security Investigations (HSI) special agents along with U.S. Customs and Border Protection conducted Atlanta’s first-ever event at the world’s busiest airport, Atlanta Hartsfield-Jackson International Airport, May 22-23, to bring awareness to the illegal practice of Female Genital Mutilation (FGM) and educate persons as to the serious penalties that exist under U.S. law for engaging in its practice.

HSI Atlanta’s outreach is an extension of Operation Limelight USA, a pilot program designed by HSI’s Human Rights Violators and War Crimes Center (HRVWCC) to bring awareness to FGM and deter its practice. The program is a U.S. based version of the United Kingdom’s Operation Limelight at Heathrow Airport conducted by the Metropolitan Police Service and Border Force.

The HRVWCC created Operation Limelight to educate the public about the risks and penalties associated with FGM. HSI Atlanta’s outreach efforts are the second such HSI event following a similar initiative at New York’s JFK airport in 2017. HSI aims to continue expanding outreach at additional international departure points to areas where FGM is commonly practiced to ensure travelers are aware that it is a crime under U.S. law.

“Removing or cutting the genital organs of a female child is a federal crime regardless of whether it’s done inside the U.S. or the child is transported outside the country for that purpose,” said HSI Atlanta Special Agent in Charge Nick Annan. “FGM is irreversible and HSI, along with its law enforcement partners, will seek prosecution of anyone subject to U.S. law it finds attempting to engage in its illegal practice.”

Specifically, Title 18 of United States Code (U.S.C.) §116, prohibits the knowing circumcision, excision, or infibulation in whole or in part of the labia majora, labia minora, or clitoris of a person under 18 years. Section (d), which was enacted in 2013, prohibits the transportation of a minor for FGM. Additionally, §116 only applies to victims under the age of 18, but some state statutes criminalizing FGM apply to all persons, regardless of age.

More than 200 million girls and women alive today have undergone female genital mutilation. FGM refers to cutting and other procedures that injure the female genital organs for non-medical reasons. While primarily concentrated in north, west, and central Africa, as well as parts of the Middle East and Asia, FGM also occurs in the United States. The Centers for Disease Control estimates that approximately 500,000 women and girls in the United States are either victims of FGM, or are at risk of being subjected to it.

As part of Operation Limelight USA, HSI special agents who complete FGM-related training speak to passengers flying to or from high-risk countries, offering informational brochures and identifying potential victims and violators of FGM. These discussions both educate passengers on the consequences of involvement in FGM and provide passengers with a means to refer cases or receive victim assistance.

HSI’s investigative focus centers on the federal law which criminalizes the practice, but challenges remain. Female mutilation is a powerful cultural practice that ensures social acceptance within communities and families, and as a result, survivors are often reluctant to come forward to provide information or much more, give testimony against their parents. Medical, educational and other professionals may be unaware of the how to determine that a girl has suffered female mutilation, or may be reticent to report the family.

Despite these challenges, in April 2017, HSI, the FBI and the Department of Justice made international headlines for the first indictment under the federal law banning female genital mutilation.

Anyone with information about victims or perpetrators of female genital mutilation is encouraged to call the toll-free ICE tip line at (866) 347-2423 or complete the ICE online tip form. For more information about female genital mutilation, view this fact sheet from the U.S. Department of State and visit www.un.org, www.unfpa.org, and www.unicef.org.