The United States has quietly frozen its aid to the Palestinian Authority (PA) pending review,i24NEWS has learned. The move comes two months after Congress passed the Taylor Force Act, which aimed to force the PA to terminate its “pay-for-slay” policies of paying stipends to convicted terrorists in Israeli jails and to the families of dead terrorists.

The act orders that US assistance to the West Bank and Gaza “that directly benefits the PA” be suspended unless the Secretary of State certifies that the Palestinian Authority has met four conditions: terminating these payments to terrorists, revoking laws authorizing this compensation, taking “credible steps” to end Palestinian terrorism, and “publicly condemning” and investigating such acts of violence.

The Taylor Force Act was passed as part of an omnibus $1.3 trillion spending bill on 23 March 2018. It was named for the US army veteran who was murdered by a Palestinian terrorist in Jaffa in March 2016, in an attack that injured eleven people.

A Senate Foreign Relations Committee aide told i24NEWS, “Our understanding is that US funding to the West Bank and Gaza is on hold pending an administration review.”

Separately, i24NEWS understands that the West Bank and Gaza office of USAID — the American international development agency — has not received its budget for the upcoming fiscal year and therefore has not been able to put its projects out to tender.

The funding freeze has caused the suspension of certain programs run by international agencies. An official at the HALO Trust, which performs landmine clearance operations in the West Bank, told i24NEWS that it had suspended operations because the United States had stopped transferring funds at the end of May, leaving a major funding shortfall.

The withholding of USAID’s total budget as well as third-party projects means the administration is taking an expansive interpretation of what assistance “directly benefits” the PA, viewing humanitarian projects that would otherwise need to be paid for by the PA as constituting direct assistance to that organization. 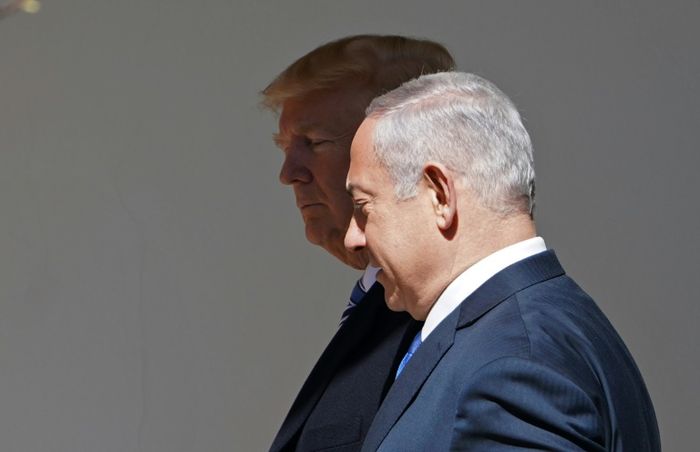 Israeli Prime Minister Benjamin Netanyahu walks with US President Donald Trump in Washington on March 5, 2018 but now he returns home to what may be the most crucial stretch of his long career with corruption probes encircling him MANDEL NGAN (AFP)

A Palestinian official confirmed the report, saying the Trump administration had told the PA in mid-January 2018 that it was reexamining its Palestinian aid budget. He said the United States had informed the PA after the emergency Organization of Islamic Cooperation meeting in Istanbul in mid-May, which convened in protest at the relocation of the US Embassy to Jerusalem and the situation in Gaza, that the assistance had been put on hold and placed under review.

The head of the PLO General Delegation to the US, Dr. Husam Zomlot, neither confirmed nor denied the report, saying only that if Washington decides to cut funding to the PA it would damage American interests in region and its vision of a two-state solution.

“If the US freezes its funding it means its freezing its vision,” Zomlot told i24NEWS, calling any decision to freeze funding “very regrettable” and “very harmful and damaging to the US’s interests and its allies’ [interests].”

“What will be affected is peace, not us,” Zomlot asserted.

The United States was, until now, the world’s largest financial backer of the PA. Although it did not provide the PA direct budgetary assistance, unlike the European Union, it contributed massive funds for humanitarian projects in the West Bank and Gaza Strip as well as for UNRWA, the UN’s Palestinian refugee agency. In this May 23, 2017 file photo, President Donald Trump shakes hands with Palestinian President Mahmoud Abbas after making statements to the press in the West Bank City of Bethlehem AP Photo/Evan Vucci, File

The total aid budget requested by the State Department for fiscal years 2018 and 2019 stood at $215 million annually for projects designed to boost the Palestinian economy, develop infrastructure, and boost institutional capacity among other goals.

The committee aide also confirmed that the State Department has submitted to Congress its criteria for determining assistance that directly benefits the Palestinian Authority, as the act required. The US State Department declined to share this unclassified report.

The PA has long had a policy of paying stipends to convicted terrorists in Israeli jails and to the families of dead militants. In 2017, the total budget for “prisoners’ payments” stood at $345 million, equivalent to half of the international contributions to the PA’s budget. The stipend is pegged to the length of the convicted terrorists’ prison sentences, meaning it is indirectly pegged to the severity of the crime.

The Trump administration slashed US payments to UNRWA in January 2018. UNRWA says $305 million have been withheld, plunging the agency into its “largest funding crisis ever” and forcing it to scramble for emergency contributions from other nations.

The funding cut comes at a time of an unprecedented diplomatic crisis between the United States and the PA, which is boycotting Trump administration officials and rejecting in advance the Israeli-Palestinian peace plan they intend to launch soon.