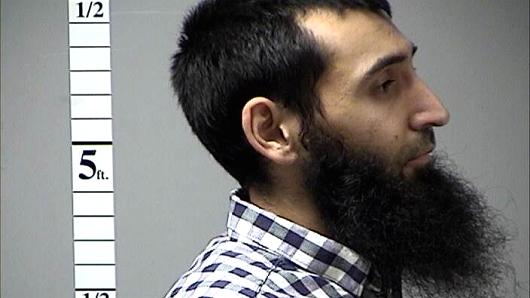 The Uzbek man charged in the truck attack last October that killed eight people on a crowded Manhattan bike path was led into a federal courtroom on Friday for what was expected to be a routine pretrial conference.

But the hearing took an unusual turn.

At one point, the defendant, Sayfullo Saipov, asked through his lawyer to address the court. Granted permission, he rose and spoke through a translator.

Mr. Saipov said that the judgments made in the courtroom were “not important” to him because they were “not Allah’s judgments.”

As Mr. Saipov, standing between two of his lawyers, continued to speak, a prosecutor, Amanda Houle, asked that the judge warn him that his statements could be used against him in court.

The judge, Vernon S. Broderick of Federal District Court, told Mr. Saipov that he had the right to remain silent and that anything he said could, indeed, be used against him.

“I understand you,” Mr. Saipov responded, “but I’m not worried about this at all.”

A few minutes later, another prosecutor, Andrew D. Beaty, interrupted to express concern to the judge. He noted that tight measures were in place in the federal detention center where Mr. Saipov was being held to limit his ability to communicate to the media, “in particular to limit his ability to discuss terrorist propaganda.”

Mr. Saipov spoke for a total of about 10 minutes, saying he would have more to say “in the future.”

But Judge Broderick made it clear that in the future, Mr. Saipov should address the court through his lawyers. The judge added that if Mr. Saipov was eventually tried, he could always take the witness stand in his own defense.

The government has not yet said whether it will seek the death penalty for Mr. Saipov, who faces eight capital counts and other charges in the Halloween day attack, the deadliest in New York City since Sept. 11, 2001. The ultimate determination is to be made by Attorney General Jeff Sessions.

Muslims speaking about jihad and sharia is only unusual to the New York Times.

Remember, Saipov entered the US on a “Diversity Visa.