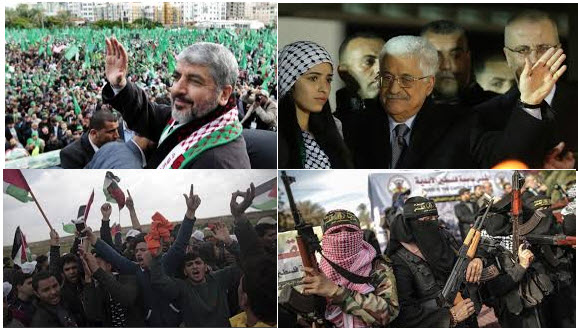 The Palestinians have never laid eyes on US President Donald Trump’s plan for peace in the Middle East. The Palestinians know nothing about the plan, which still has not been made public.

That fact, however, has not stopped them from categorically rejecting the yet-to-be-announced plan — a stance the Palestinians repeated this week as US Middle East envoys Jared Kushner and Jason Greenblatt visited Israel and a number of Arab countries to discuss the plan.

The Trump plan has not even been finalized and, as such, has not officially been presented to any of the parties to the Israeli-Arab conflict. Kushner and Greenblatt have been working on the plan for several months; their current tour of the region comes in the context of Jordan and Egypt.

Most of the Palestinian attacks have thus far been directed against Trump’s “Jewish and Zionist” advisors, including Kushner, Greenblatt and US Ambassador to Israel, David Friedman.

The vicious attacks on Trump and the senior US administration officials have also been accompanied by statements from Abbas and other Palestinian officials concerning the US president’s Middle East peace plan. In these statements, the Palestinians have not only voiced their rejection of the plan that does not yet exist, but have also, on almost a daily basis, been condemning it, dubbing it a “conspiracy” designed to eliminate Palestinian rights. In the most recent Palestinian attack on the plan, Palestinian Authority leaders are now claiming that it is actually aimed at “dividing the Palestinian people” by establishing two separate Palestinian entities — one in the West Bank and another in the Gaza Strip.

The Palestinian position regarding this unseen Trump plan, is largely based on rumors and media speculation. Palestinian officials have admitted that they get their information mostly from the media.

So, the Palestinians have rejected something they know nothing about. What, then, is bothering the Palestinians about the Trump plan or any other peace initiative? Attempts by the US administration to arrange meetings with PA leaders in Ramallah to consult with them about the proposed plan have fallen on deaf ears. The Palestinians express zero interest in even seeing if they might find something good in the plan.

The Palestinians want nothing to do with Trump’s plan: they know it will never satisfy their demands. The Palestinians are not opposed to the peace plan because of a dispute over a border or a settlement or a checkpoint or the status of Jerusalem. They are against Trump’s plan — and any other peace initiative — because the Palestinians have something else in mind.

When the Palestinians denounce the Trump plan as a “conspiracy,” they mean that this is a US conspiracy to thwart their efforts to annihilate Israel. What the Palestinians are saying is: “Who are these Americans to come and preach to us about peace with the Jews living here when our real goal is to drive the Jews out of this land?”

In the summer of 2000, Yasser Arafat walked out of the Camp David summit (with President William Jefferson Clinton and then-Prime Minister Ehud Barak) after realizing that the proposals on the table did not satisfy the Palestinian aspirations and dreams – of destroying Israel. What Arafat wanted was Israel to give him control over the entire West Bank, Gaza Strip and east Jerusalem. What he wanted was to establish a Palestinian state on these territories so that the Palestinians could use it as a launching pad to “liberate the rest of Palestine” – that is, to destroy Israel. When a furious Arafat realized that he would not get what he wanted, he returned to Ramallah and incited Palestinians to wage against Israel another wave of terrorism, called the Second Intifada.

Now Mahmoud Abbas is sitting in Arafat’s seat. Abbas does not like the Trump peace plan, sight unseen: he knows that it will not advance his goal of fulfilling the “phased solution,” in which Palestinians would take land bit by bit of and use it as launching pads to pursue the jihad against Israel.

The Palestinian position is and has been very clear: Israel must give us as much land as possible so that we can continue to build our power, force and energies to continue the struggle to achieve our ultimate goal – eliminating Israel. The Trump plan, as far as Abbas and his associates are concerned, is a bad deal because it does not require Israel to surrender completely and abandon territories that would be later occupied by Hamas, Islamic State, Iran and Palestinian Islamic Jihad.

There is only one peace plan that the Palestinians will accept; it is the plan that enables them to achieve the “phased solution” of wiping Israel off the face of the earth.

Abbas is opposed to Trump’s plan because Abbas wants a temporary Palestinian state that would be used in the future as a launching pad for Arab armies and Palestinian and Islamist terror groups to wage attacks on Israel. The Trump plan, as far as he is concerned, does not take into consideration the Palestinian dream of eliminating Israel — and this omission goes way over his red lines.

The world already saw what happened the last time Israel gave Abbas land. That was in 2005, when Israel pulled out of the Gaza Strip and handed it over to Abbas and his security forces.

Within a few months, Abbas and his cronies fled the Gaza Strip after Hamas and had thrown Palestinian Authority members to their deaths from the top floors of tall buildings, and handed the entire area over to Hamas. The rest, as they say, is history. If Israel withdraws from the West Bank, the same scenario would likely repeat itself there. This time, however, Hamas would take over the West Bank not within months, but days or weeks.

In addition, no Palestinian leader is in a position to accept any peace agreement with Israel — especially not after both Abbas in the West bank and Hamas in the Gaza Strip have spent an entire lifetime radicalizing their people against Israel through incitement and indoctrination.

Decades of incitement in mosques and in the media have turned Israel, in the eyes of most Palestinians, into one large settlement that needs to be uprooted. Consequently, the Palestinian public is not prepared to hear about any peace plan, not from Trump and not even from Prophet Mohammed.

Undoubtedly, Trump and his envoys come with the best intentions about making peace between Arabs and Jews in our part of the world. However, what they do not seem to see, however, is that as things stand today, there is no partner on the Palestinian side for any deal with Israel.

The Palestinians are divided into camps — one that openly states that it does not want to make peace with Israel because its goal is to destroy Israel and replace it with an Islamic state, and a second camp that, even if it wanted to make peace with Israel – and it does not – could never do it because it has trained its own people to accept only a mandate for murder.

The first camp is called the “radical camp.” This is the camp that is opposed to Israel’s presence in the Middle East.

The second camp is what the Palestinians call the “Abbas camp,” which is corrupt and weak and sends conflicting messages to its people and speaks in more than one voice.

The two Palestinian parties, the Palestinian Authority and Hamas, may disagree on everything — except the elimination of Israel. The only peace plan acceptable to current Palestinian leaders would be one that facilitated their mission of pursuing jihad against Israel to obliterate it.

If Kushner and Greenblatt wish to learn more about the true ambitions of the Palestinians, they would do well to take in a sermon at a mosque on some Friday or stop into a school in the West Bank and Gaza Strip. Perhaps then they would see for themselves that no peace plan in the world can, at the moment, counter the poison that is injected daily into the hearts and minds of the Palestinians and their children.

Bassam Tawil is a Muslim Arab based in the Middle East.