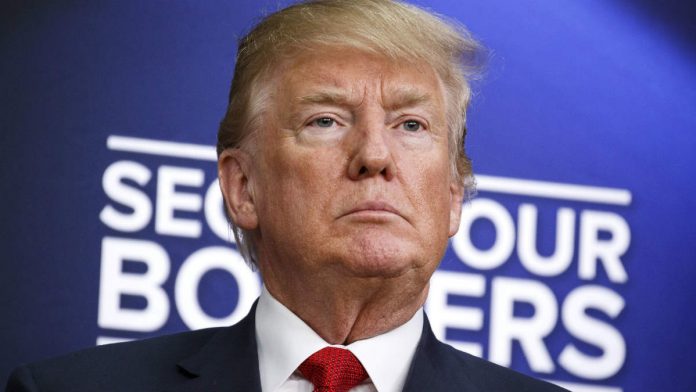 When you have a flooding basement, the first thing any sane person would do is immediately work to stop the flow of new water before figuring out a strategy to deal with the water that already got in. That’s exactly how we should handle our flooded border. The president has a trump card, rooted in Article II of the Constitution to control foreign affairs, and reiterated as delegated congressional authority under 8 U.S.C. §1182(f) (Sec. 212(f) of the INA) to shut down all immigration. It’s time for him to pull the trigger and shut down all forms of border migration once and for all.

On Sunday, Trump tweeted out a very succinct point that cuts to the heart of the border problem:

We cannot allow all of these people to invade our Country. When somebody comes in, we must immediately, with no Judges or Court Cases, bring them back from where they came. Our system is a mockery to good immigration policy and Law and Order. Most children come without parents…

….Our Immigration policy, laughed at all over the world, is very unfair to all of those people who have gone through the system legally and are waiting on line for years! Immigration must be based on merit – we need people who will help to Make America Great Again!

The president is absolutely right. As long as the cartels and the migrants know that they have the ability to come here and tie up our legal system for years, they will continue coming. Not only does this saddle our communities with crushing costs, dangerous drugs, and high crime, it is terrible for the migrants themselves. Everyone should agree that this must stop. Yet Congress refuses to act.

In order to leverage Congress to act on a long-term solution to adjudicate all asylum claims off our soil (listen to my podcast, where I explain the plan), he should immediately invoke §1182(f) and announce a six-month moratorium on all acceptance of any claims at the border.

Let’s take a look at the language of the statute granting the president at-will plenary authority to shut down even legal immigration:

There are three important observations to be made here:

Section 212(f) has been invoked 43 times since 1981, 19 of which were by President Obama. The one major Supreme Court case covering 212(f) was Sale v. Haitian Centers Council, Inc. (1993), which dealt with a policy established by Bush 41 and Clinton to apprehend Haitians traveling by sea to our shores. The policy was designed to return these Haitians to their home country before they could land in the United States and apply for asylum. In a clear 8-1 decision authored by Justice John Paul Stevens, the court fully upheld the act and made it clear that there are no limitations on 212(f) authority.

Similarly, the few lower court decisions on this matter clearly affirmed long-standing settled law. Any alien who enters the country without lawful status or against the president’s 212(f) proclamation is considered to be outside our borders and has no right to apply the due process of deportation procedures to his predicament.

In one of the few cases on 212(f) (Encuentro del Canto Popular v. Christopher, 1996), a district judge in California made it clear that not only does the president have the delegated authority from the legislature to cut off visas, but he also has his own powers to conduct foreign affairs:

The exclusion of aliens is a fundamental act of sovereignty. The right to do so stems not alone from legislative power but is inherent in the executive power to control the foreign affairs of the nation. * * * When Congress prescribes a procedure concerning the admissibility of aliens, it is not dealing alone with a legislative power. It is implementing an inherent executive power” [930 F. Supp. 1360, 1365 (N.D. Cal. 1996)].

If a president can’t put a temporary halt on asylum requests when over 90 percent of them are bogus and they serve as the impetus for empowering drug cartels, which pose the most imminent national security threat to our homeland, then a president has no power over foreign affairs whatsoever without asking permission of a court.

In addition to INA 212(f), there is another section — INA 215(a)(1) — that grants the president an almost equal level of authority to regulate entry of all aliens, which includes both immigrant and non-immigrant visas:

Unless otherwise ordered by the President, it shall be unlawful–

If demanding that all immigrants enter legally or apply for asylum in a safe and controlled environment at a consulate rather than at a border controlled by some of the most dangerous people in the world is not a “reasonable rule,” I’m not sure what is. According to the Congressional Research Service, President Carter used 215(a)(1) authority to suspend immigrant and non-immigrant visas from Iran following the Iran hostage crisis. Bill Clinton also used it to prevent Haitians from landing on our shores. These regulations clearly cover even legal permanent residents; they therefore certainly cover people who have no ties to our country and are seeking entry at our border for the first time.

The point is that nobody ever has a claim to land on our shores without the consent of the president, and the president can block such entry using both his inherent Article II powers and these two sections of the INA. As the Supreme Court said in Youngstown Sheet & Tube Company v. Sawyer, “When the president acts pursuant to an express or implied authorization of Congress, his authority is at its maximum, for it includes all that he possesses in his own right plus all that Congress can delegate.”

Also, let us not forget that even if individuals find a way onto our soil, that does not give them any affirmative rights. Constitutional rights on our soil only apply to a person who comes here with consent. That is deeply rooted in social compact theory and settled law. As the court said long ago in United States v. Ju Toy, a person who comes to the country illegally is “to be regarded as if he had stopped at the limit of its jurisdiction, although physically he may be within its boundaries.”

Trump is reportedly looking for a way to go big on immigration using executive authority. He already has the ultimate authority to shut off the migration completely. And that is all the leverage he needs over Congress.