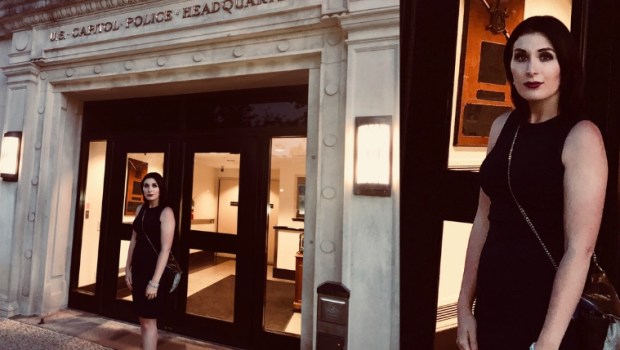 Journalist Laura Loomer filed a police report accusing Congresswoman Maxine Waters of assaulting her when she did to Waters what the California Democrat urged liberals to do to Trump aides: Confront them in public.

Loomer tweeted: “I filed a police report w/Capitol Police against Maxine Waters. Yesterday when I confronted her on Capitol Hill, she ASSAULTED me. She hit my hand, then she swatted me in the face twice w/her papers. I’m pressing charges.”

Loomer chronicled the alleged assault on video and blogged about it at Big League Politics.

Yesterday when I confronted her on Capitol Hill, she ASSAULTED me. She hit my hand, then she swatted me in the face twice w/ her papers. I’m pressing charges against her. https://t.co/t6GiTwI97x

The brouhaha erupted when Loomer asked Waters why she incited her supporters to confront Trump aides and not allow them to eat or do anything else in public without being bullied by an angry mob.

Waters cut her off by saying: “Please come to my office and sit down with me.”

Loomer followed up by saying: “I just wanted to ask you: Where are conservatives allowed to go? Do we have to sit at the back of the bus? Where can we eat? Where can a conservative eat at a restaurant in Washington, D.C.?”

Waters responded while scurrying away: “Please come to my office and talk with me.”

Obama separated families at the border.
Obama housed unaccompanied minors in tent cities & in cages.
Obama prosecuted hundreds of thousands for illegal border crossings.
Obama deported millions.
Where was this TIME cover then?

(Yes, the children in cages photo was taken in 2014) pic.twitter.com/uywXO4FIBi

Loomer then asked, “You’re talking about civility. Do you think it’s civil to call for the harassment of Trump officials?”

When Waters approached the elevator, she hit Loomer in the face with a bunch of papers. A burly man then got in Loomer’s face and pushed her away while repeatedly shouting: “Ma’am, it’s a members’ elevator!”

In the background, Waters is seen gloating and apparently sticking her tongue out as Loomer is pushed away from the elevator door.

Waters — a 13-term Congresswoman — recently urged her supporters to gather a crowd, surround, and harass Trump aides to protest the longstanding immigration policy that she helped sign into law many years ago.

After Waters’ incitement of mob bullying, White House press secretary Sarah Sanders and her children were kicked out of Red Hen and stalked when they went across the street to eat at another restaurant.

Shortly afterward, Florida Attorney General Pam Bondi was surrounded, bullied and spit on by an angry mob at a movie theater.

Fla AG Pam Bondi details attack by angry liberal mob at movies. She was surrounded, screamed at, taunted and spit on. https://t.co/k0ElEQ5szM pic.twitter.com/aoak0eJjDz

Maxine Waters said nothing when the Obama administration separated children from their illegal-immigrant parents and mass-deported illegals during his eight years in office. Waters has been a member of Congress for the past 27 years and said nothing about the issue until this month, when it became a Democratic talking point amid the flailing Mueller investigation.

While Waters claims she’s a champion for minorities, in fact many members of her own community can’t stand her.

As BizPac Review has reported, Waters’ career highlights include being rated one of the “most corrupt” members of Congress in 2005, 2006, and 2008 by the George Soros-funded liberal watchdog CREW (Citizens for Responsibility and Ethics in Washington).

In June 2017, Waters was slammed by a black female voter from her California district. The woman accused the 13-term Congresswoman of being a “black racist” whose rhetoric and inactions have caused African-Americans to lose jobs to illegal aliens.

The black Trump supporter said she’s disgusted that Waters constantly race-baits to win votes from black constituents and then callously ignores them after they re-elect her.

“You are a black racist! You hate blacks!” the woman said. “All the jobs went to illegals! You gave our jobs to illegals! We want you out!”