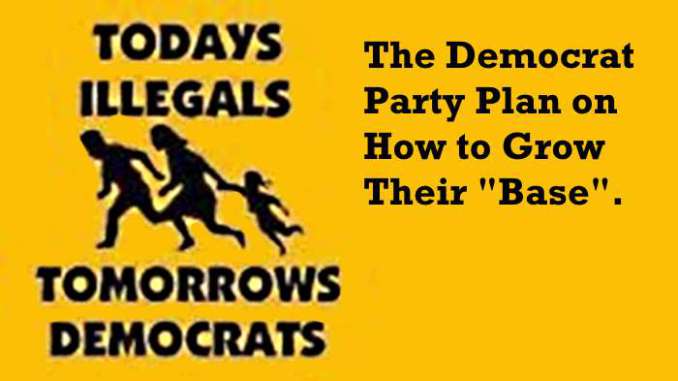 Today’s lesson on morality and human rights comes from the probable (according to polls) next president of our crime-infested and corrupt neighbor to the south (emphases added):

Apparently, the U.S. must welcome an unlimited number of these unwanted, by their own president, Mexicans, because the U.S. is morally obligated to serve as Mexico’s social-dysfunction safety valve and ATM.

Did you know that “chutzpah” is the same in Hebrew and Spanish?  On the other hand, everyone knows that Obrador can count on a large cohort of Democrats, who share his view:

The reaction among immigration advocates has gone from outrage about family separations to consternation about family detention, because their ultimate goal is to let the migrants come into the United States and stay.

Lest anyone misunderstand, when Democrats say “the,” they mean “all.”  Today, it’s “family separations”; tomorrow, who knows?  But whatever the Dems’ démagogie du jour, most Americans want illegal immigration greatly reduced and, ideally, eliminated.  The latter, most likely, is a pipe dream.  But not only can the former be done.  It can be done using methods already tried and proven.

First, yes, we need a wall.  If the tooth-and-nail opposition of our open-border Democratic friends is insufficient evidence that a wall would work, consider, as President Trump has, Israel’s wall.  Israel had an illegal alien problem, too – or she did, until she built a wall, as a February 2017 Senate report confirmed:

The number of illegal crossers on the Israel-Egypt border dropped after the construction of the fence, from more than 16,000 in 2011 to less than 20 in 2016 – a 99 percent decrease.

One can argue, as some do, that other Israeli measures contributed to the decrease.  But there can be no doubt that the wall was the primary, and a major, factor.

So a wall – and ending chain migration, and ending the visa lottery, and mandatory E‑Verify – will greatly reduce unlawful immigration.  But there is one more thing government can do.

Allow the writer, whose father immigrated to America as a refugee, in 1948, to elucidate:

When the writer’s dad got off the boat, he did not simply disembark in Manhattan, casually stroll streets paved with gold and buy the Brooklyn Bridge.  First, he had to stop here:

In the first half of the 19th century, most immigrants arriving in New York City landed at docks on the east side of the tip of Manhattan, around South Street.  On August 1, 1855, Castle Clinton became the Emigrant Landing Depot[.] … [W]hen the U.S. government assumed control of immigration processing, [it moved] the center to the larger, more isolated Ellis Island facility on January 2, 1892 … because immigrants were known to carry diseases, which led to epidemics of cholera and smallpox.

The key word in the above quote is “isolated,” as in no physical route for unlawful aliens on to the mainland.

Then, the dangers were cholera and smallpox.  Today, the dangers are MS-13 violence, lack of education and marketable skills, and the threat of someday becoming citizens and voting for Democrats.  In both cases, the problem was a threat to the population from foreign immigration.  And in both cases, the solution was to isolate new arrivals until they could be properly vetted and admitted into the mainland U.S. lawfully.

The writer lives in New York City, and last time he checked, Ellis Island was still there, repurposed as a museum.  So how about making so-called catch-and-release unnecessary by returning Ellis Island to its original use and supplementing or replacing the current buildings with one or more new, modern dormitories, where illegals seized at the border could be housed comfortably, for as long as required, and with no need to separate families?

On the other hand, Ellis Island is on the opposite side of the country from the Mexican border, where the main problem is.  Alcatraz Island is not.  What about the Virgin Islands, Guam, or any number of U.S. island possessions, where the climate is both comfortable and similar to that of Mexico and Central America?  The specific location is less important than that there be no physical access to the mainland, nor would the housing need to be overly expensive – Quonset huts if space allows, or easily convertible, and stackable, cargo containers.

Or even tents, as the Navy is already planning:

The U.S. Navy drafting plans to house up to 25,000 immigrants on its bases and other facilities, at an estimated cost of about $233 million over six months, as the Trump administration seeks to ease a mounting crisis on the Mexican border[.] …

[T]he draft document … also says that a Navy base in California could house up to a further 47,000 people.

Problem solved…almost.  It’s a good plan, but with one major flaw: perhaps the writer is mistaken, but it seems that all of the proposed military bases are on the mainland U.S.  Again, the locations should be isolated, with no physical connection to the mainland.  There is also the issue of cost and not just the $233 million for six months (so $466 million per year); one company has a $162-million contract “to fly immigrant children to shelters across the United States.”

There is a better, and possibly cheaper, solution.  It’s staring the Navy right in the face.

Surely, most readers know that the Navy maintains a reserve, or “mothball,” fleet of decommissioned ships anchored in various parts of the country, including California.

Your typical aircraft carrier houses about 6,000 sailors.  But think of all that extra space on the (unused) flight deck.  Aircraft carriers also have kitchens specifically designed to feed thousands of people.

America is not suffering from a shortage of decommissioned ships.  Why pay hundreds of millions of dollars to fly apprehended illegals to multiple locations around the continental U.S. when the Navy can move the ships to the immigrants, anchoring as close to the problem as possible but far enough from shore to keep illegals from accessing the mainland?  Other mothballed ships could ferry large numbers of illegals to and from the offshore ships far more cheaply than flying them all over the country.

Additional ships could even return rejected aliens to their home countries – preferably, as Eisenhower did, on the side of the home country farthest from the U.S.

Let all potential trespassers know that should they manage to violate our border, the only part of America they will ever see is the part of America they can see from the deck of a ship before being transported on a slow boat back to their home countries, and unlawful immigration will drop.  Like a rock.