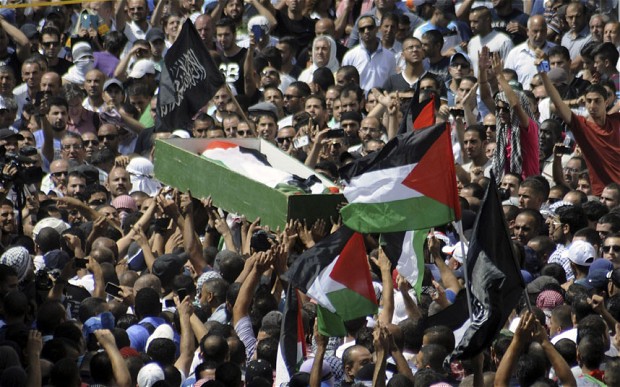 Headline: “Laith Abu Na’im – my wish is a ‘large wedding’”

“He was known for his strong envy of the large Martyrs’ (Shahids’) funerals, and used to say: ‘I want a wedding similar to these funerals.’ Two days ago (Tuesday, Jan. 30, 2018) in the afternoon what Martyr Laith Haitham Abu Na’im (16) from the village of Al-Mughayyir, northeast of Ramallah, wished for happened when an occupation soldier shot a bullet in his face and he died as a Martyr. Yesterday a big wedding was held, as he yearned for (i.e., Martyr’s funeral is considered wedding to the 72 Virgins in Paradise in Islam).
He competed with his friends about who would get there first to throw rocks at the occupation’s jeeps, and did not let anyone precede him.”
Click to view bulletin

Laith Haitham Abu Na’im – 16-year-old Palestinian who according to the PA Ministry of Health was shot and killed on Jan. 30, 2018, during a confrontation with Israeli soldiers near Ramallah. The Israeli army said that Palestinians were throwing rocks and Molotov cocktails at the soldiers and that no live bullets were used by the army. It is investigating the claim regarding Abu Na’im’s death.