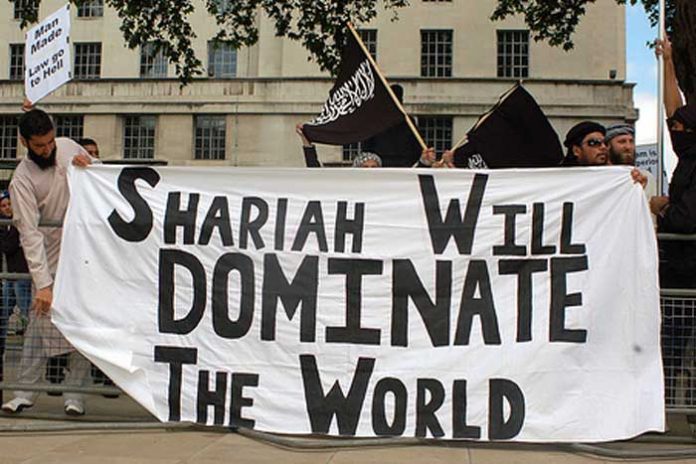 Sharia is a legal system, not a religious guide.  Sharia is not ‘religious law’ or a ‘spiritual guide.’  It is real law.  Sharia is Islamic law adjudicated by Islamic jurists and Islamic legal scholars.

Sharia should be compared to U.S. Federal Code, not Jewish Halakhah or Christian Canon Law.

Sharia is what all jihadis unanimously state is the thing they seek to impose on the entire world, and the blueprint by which they are fighting us. [emphasis added]

There are two sources of sharia:  the koran and the sunnah.

According to Islam, the koran is the “uncreated word of Allah.”  Allah is the Islamic god.

According to Islam, the contents of the koran were revealed to Islam’s prophet Mohammad between the years 610 A.D. and 632 A.D. through an angel.  The koran has 114 chapters or suras which are not arranged in chronological order.

Islamic scholars have authoritatively put the chapters of the koran in chronological order, which is critical to understanding Islam, sharia, and the koran.

Specifically, the chronologically last sura (chapter) in the koran to discuss jihad is sura 9.  The violent verses in sura 9 calling for jihad (warfare against non-muslims) as a permanent obligation upon the muslim community until the world is conquered for Islam (9:5 and 9:29 among others), legally control earlier more peaceful sounding verses.

The koran commands muslims to wage war against non-muslims until they:  (1) convert to Islam, (2) pay the jizya (non-Muslim poll tax) and submit to sharia, or (3) are killed.

The last sura to discuss relations between muslims and non-Muslims is Sura 5.

Mohammad is considered the al Insan al Kamil in Islam – the most perfect example of a man.  If Mohammad did it or said it, it is an example for all Muslims to follow for all time. His words and deeds are recorded in the authoritative biographies (sira) and the reports (hadith) of what Mohammad did and said.

The sira and hadith make up the “sunnah.”

Example:  Why is it okay for a 60 year old Muslim man to marry an 8 year old girl?  Because Mohammad married Aisha when she was six (6) years old and consummated the relationship when she was nine (9). Mohammad is the perfect example, therefore, it is a capital crime in Islam to suggest this behavior is wrong.

If Allah said it chronologically last in the Koran, Mohammad (the perfect man) said it, and Mohammad did it, how could there be confusion about war against non-muslims in sharia, which comes from the Koran and the example of what Mohammad said and did (sunnah)?

There is no such thing as a “different kind” of sharia which does not mandate jihad until the world is under the rule of the sharia, and there is no other legal definition of “Jihad” in sharia other than “warfare against non-Muslims.”

The hudud crimes are specifically listed in the koran (7 of them), for which the koran also provides some punishments.

For instance, the punishment for hirabah (Armed Robbery et al) states:  “The punishment for those who wage war against God and His messenger and pursue corruption on earth is:  execution, or crucifixion, or the cutting off of hands and feet from opposite sides, or exile from the land (Islamic Criminal Law, The Hudud, Muhammad ‘at a Alsid Sid Ahmad, Malaysia).

Because the punishments come from Allah via the Koran, the guilty party must be punished in the manner prescribed.

A sharia judge may not show “mercy,” because that would directly contradict Allah, which is a capital crime.

Sharia is how the Islamic enemy communicates and understands the world.  This is why it is crucial to use the filter of sharia when our adversaries speak so we can properly understand what the enemy intends.

In the Sharia, “Terrorism” is killing a Muslim without right; “Human Rights” is the imposition of Sharia (per the Cairo Declaration, a formal document served to the UN by the entire Muslim world via the OIC in 1993); and “Extremism” is when a Muslim exceeds his ability or authority.

According to Islamic sharia, “Zakat is obligatory for every free Muslim (male, female, adult, or child) who has possessed a zakat-payable amount for one lunar year.”

In Koran verse 9:60 states:  “Zakah expenditures are only for the poor and for the needy and for those employed to collect Zakah and for bringing hearts together for Islam and for freeing captives or slaves and for those in debt and for the cause of Allah and for the stranded traveler – an obligation imposed by Allah . And Allah is Knowing and Wise.”

From this Koranic verse, sharia declares:  “It is obligatory to distribute one’s zakat among eight categories of recipients – meaning that zakat goes to none besides them, one-eighth of the zakat to each category.”

Specifically, category 7 is defined in sharia as:

“Those Fighting for Allah.  The seventh category is those fighting for Allah, meaning people engaged in Islamic military operations for whom no salary has been allotted in the army roster, but who are volunteers for jihad without remuneration. They are given enough to suffice them for the operation, even if affluent; of weapons, mounts, clothing, and expenses for the duration of the journey, round trip, and the time they spend there, even if prolonged.” [Um dat al Salik, Book H Zakat, H8.17]

Sharia is real law.  Is sharia compatible with U.S. laws?

How can Sharia be so clearly defined and implemented by Islamic legal scholars and jurists around the world, taught to elementary and junior high school students in Islamic schools around the world, yet be confusing to leaders in the West?