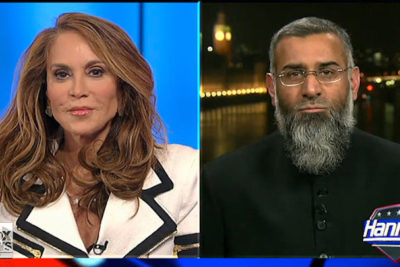 Anjem Choudary is a notorious British imam who for years incited to Islamic violence and murder (including calling for me to be killed) and urged Muslims to follow the path of Muhammad (murder, mayhem and destruction) — and it was even revealed that he was doing it with a million pounds of taxpayer money.

They banned me from entering and gave him a million pounds. And now they’re going to release him and enable him to continue his jihad activity. That in a nutshell is why Britain is dying.

“Preachers of hate back on Britain’s streets: MI5 terror alert as five jihadi leaders linked to London Bridge attack are set to be let out of jail by the end of the year,” by Omar Wahid, The Mail On Sunday, June 24, 2018:

Police and security chiefs fear the high command of an extremist group that inspired a generation of jihadis will soon be free again to preach hate on Britain’s streets.

Five senior figures in Al-Muhajiroun, whose former members include London Bridge attacker Khuram Butt and Michael Adebolajo, one of Fusilier Lee Rigby’s killers, are expected to be released from prison by the end of the year.

Among them is Anjem Choudary, who is due for release in October having served less than half of a five-and-half-year sentence for inviting support for IS.

It is understood that Choudary, 51, will be kept under curfew in a taxpayer-funded safe house in North London and prevented from spouting extremist views.

But astonishingly, no such restrictions are in place for the others.

According to a source, MI5 and the police fear that, buoyed by the ‘street cred’ of serving prison terms, they will set up recruitment stalls in areas such as London and Luton.

There is concern that the Human Rights Act will prevent police from stepping in.

Up to 80 of the 193 people convicted of terrorism offences between 2007 and 2016 will be eligible for release this year – a situation described as a ‘concern’ by Home Office Minister Ben Wallace.

Choudary is suspected of inspiring at least 100 British jihadis and is denied access to fellow inmates by being kept in a ‘prison within a prison’ at HM Frankland in County Durham.

Once released, it is understood he will be allowed to visit his family in Ilford, East London, during the day but must return to the safe house at night.

He will be under 24-hour surveillance and prevented from preaching in person or on the internet.

But Choudary’s right-hand man, Mohammed Mizanur Rahman, 34, of Whitechapel, East London, who was also convicted of inviting support for IS and is likely to be released in October, faces fewer restrictions.

A source claimed Rahman, whose lectures included the condoning of the beheading of British aid worker Alan Henning by IS in Syria, will be able to meet fellow ALM members and preach in public.

It is understood the same freedom will be available to Mohammed Ishtiaq Alamgir, 38, the leader of ALM in Luton who is expected to complete his sentence in December for a terrorism offence, and Rajib Khan, 39, also from Luton, who was released earlier this month after completing a five-year jail term….