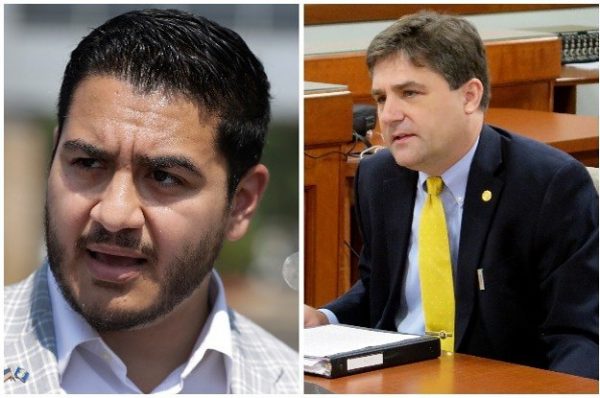 Michigan voters may remember when gubernatorial candidate Abdul al-Sayed said to his Republican opponent: ‘You may not hate Muslims but Muslims definitely hate you!’ That opponent is Patrick Colbeck, and he is being supported by Trevor Loudon, Philip Haney and others who are holding a fundraising webinar for him on July 9, 2018.

Patrick Colbeck has been raked across the coals for daring to mention Abdul al-Sayed’s ties to the Muslim Brotherhood. Revealingly, al-Sayed has not addressed these concerns, opting to ignore the charge and paint Patrick Colbeck as anti-Muslim.

Abdul El-Sayed is the epitome of the Red/Green Axis, espousing radical leftist views while being a Muslim, a combination that seems incompatible, but actually is very compatible if the goal is to fundamentally transform America. If you are interested in learning more, scroll all the way to the bottom of this post and watch Trevor Loudon’s mini documentary film: Soviet Islam.

Anyone and everyone should have a shot at leadership – no matter the color of their skin, who they love, what neighborhood they grew up in, or how they pray. I fight for a future where all of us can run for office without having our very American-ness questioned. pic.twitter.com/TXA8tBlxr2

Abdul al-Sayed comes from a very political Muslim background and holds extreme leftist views. It is no secret that El-Sayed was vice-president of the Muslim Student Association, an organization specifically identified as one of those belonging to, or friends of, the Muslim Brotherhood. Perhaps Abdul al-Sayed, whose father was born in Egypt, was unaware of this connection.

Abdul al-Sayed’s father-in-law Dr. Jakaku Tayeb, is the former president and current board member of the Michigan chapter of the Council on American-Islamic Relations (CAIR), and a member of the founders committee for the Muslim Brotherhood-front group Islamic Society of North America (ISNA). CAIR also has deep connections to the Muslim Brotherhood, and the head of CAIR Nihad Awad has claimed his public support of the terrorist group HAMAS.

Just two days ago, al-Sayed tweeted that he was “proud” to have been endorsed by Marxist Democratic Socialist of America member Alexandria Ocasio-Cortez, who won her bid in the New York primary against incumbent Rep. Joe Crowley (D-NY) in the 14th congressional district.

It’s time for a politics that represents us all – not just the powerful.

I am proud to have welcomed the endorsement of Alexandria Ocasio-Cortez. We walk together on this path for a more just, equitable future. pic.twitter.com/22PE8izP8R

Thankful for her leadership, grateful for her support, and looking forward to building a more just, equitable, and sustainable America together. pic.twitter.com/rt6faWFS6V

There are many other tweets between Alexandria Ocasio-Cortez and Abdul El-Sayed, an illustration of his radical policies, which by their nature, would raise taxes substantially in Michigan. He wants $15 minimum wage, Single Payer healthcare, universal Pre-K, free college, gun control – including banning the AR-15, which he refers to as a “weapon of war,” massive infrastructure spending, and a “state-operated internet service provider.”

Some other revealing tweets:

Our mommas raised us to have manners and to be kind to all. But they also taught us to fight for our rights.

For you, civility may be a matter of convenience. For too many of us, civil rights are a matter of existence.

and in Michigan we’re going to do it.

It was a pleasure to host my sisters Linda Sarsour, founder of the @womensmarch‘s on Washington and Winnie Wong, founder of @People4Bernie, in Michigan last night. We’ll do this work #ForOurFuture together. pic.twitter.com/KXPCN4rDyM

And for another year #Dreamers – #Americans in every way but paper – will go without protections from a @realDonaldTrump administration hellbent on scapegoating them to their white supremacist base.

If we can’t stand up for the defenseless, what are we even here for? #DACA

Abdul El-Sayed has attacked Patrick Colbeck for having “Islamophobia,” but he has not addressed Colbeck’s concerns about having connections to the Muslim Brotherhood.

“What frustrates me more is not that you have blatant racism on the part of certain people, but what frustrates me more is in the words of Dr. Martin Luther King, is not when bad people speak out but when good people fail to speak out, and what I have not heard is the Republicans on this panel, decisively and swiftly call out this kind of Islamophobia, this kind of racism, in the context that they are wanting to represent the state that has the highest per-capita number of Muslim Americans in the country. Now you may not hate Muslims, but I’ll tell you, Muslims definitely hate you!”

Watch the full 6-minute exchange between Colbeck and Sayed in the video below: