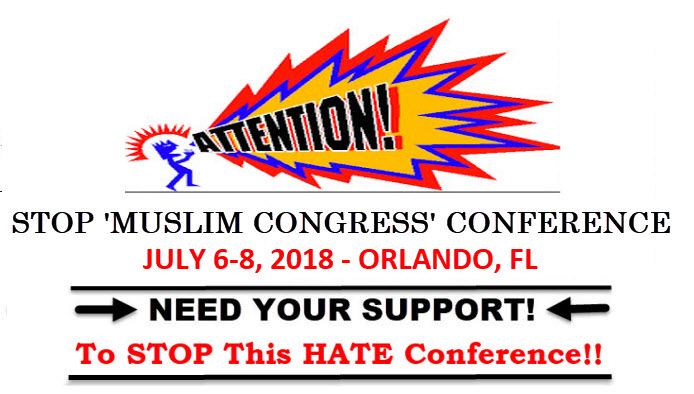 We told you about this “Hate Fest” happening at the Orlando Hyatt Regency this weekend, July 6th through the 8th that includes speakers with a history of bigotry & hate filled rhetoric.  And asked for you to stand against it to help shut it down.  Well… it’s on and NOT shut down, but in the last few days some organizations have finally made a public statement against it’s list of speakers.

The event (see our alert here):

Hosted by the Hyatt Regency

Here are the organizations finally making that public statement about the speakers, but a bit too late.  The conference did not make any changes!  Here are the two groups:

The Zionist Organization of America (ZOA) denounced the Muslim Congress for its plan to feature anti-Semitic, Holocaust-denying, anti-gay, and pro-terrorist speakers at its 14th annual conference – entitled “Islam: Religion of Hope”—on July 6-8 in Orlando, Florida.The Muslim Congress represents itself as a charitable 501(c)(3) tax-exempt organization whose objectives are “to promote Islamic knowledge, morality, divine values and cooperation among members living in various Muslim communities of North America.”  Yet the speakers that the Muslim Congress chose to feature at its conference do not endorse these benevolent objectives.  Instead, they promote hateful and divisive views, making false accusations against Jews, denying the Holocaust, inciting violence against gays, and promoting Islamic terrorist groups that have wreaked havoc on innocent civilians, including by kidnapping and raping young girls and women, and engaging in suicide bombings, beheadings, and other violence.Kevin Barrett, one of the featured speakers, has falsely blamed Jews for the 9/11 terrorist attacks, claiming that “neoconservative Zionists” are the main suspects in what was allegedly an inside job.  Barrett said, “We have this huge powerful ethnically Jewish Zionist lobby here in the United States that has taken over American Middle East policy and made it subservient to the politics of Israel . . . these people have engineered 9/11 itself.” (View footage here). Barrett has also denied the Holocaust, stating that “this is an issue that I’m still on the fence on.  I don’t know who’s right about this. There are very serious questions about the so-called Holy Trinity of the Holocaust story . . . Anne Frank is a sub-myth of the larger myth of the Holocaust.”The Muslim Congress conference is also scheduled to feature Sheikh Hamza Sodagar, who endorses killing gays, and in excruciatingly horrific ways:  “The punishment for homosexual men . . .  the easiest one maybe is to chop their head off. Second, burn them to death. Third, throw them off a cliff. Fourth, tear down a wall on them.  Fifth, a combination of the above.” (View footage here).  Sodagar’s incitement of violence is even more appalling considering that the 2016 terrorist attack at Pulse, a gay nightclub, was perpetrated by an Islamic extremist not far from where the Muslim Congress conference is taking place. Asad Jafri, another scheduled speaker at the conference, has promoted safeguarding Islamic terrorists and called for Israel’s destruction.  At a rally in Toronto, he implored, “Leave ISIS alone, leave Al Qaida alone, leave Al Nusra alone, leave Boko Haram alone . . . down with Zionism!”  He also threatened, “You will see the destruction of Israel very soon.” (View footage here).  Sharona Whisler, executive director of ZOA’s Florida chapter, criticized the Muslim Congress for its decision to feature such hateful, bigoted and violence-promoting speakers at its upcoming conference:  “The Muslim Congress claims to embrace morality and divine values and to seek to educate people about Islam as a religion of hope.  Yet the Muslim Congress is featuring speakers at its conference who stand for exactly the opposite.  Making false accusations against Jews to incite hatred of them, denying the Holocaust, supporting Islamic terrorist groups like Al Qaida, and calling for the murder of gays, is nothing short of immoral and abominable, and against the values of every humanity-loving person. “All of us – especially our public officials – should be condemning the Muslim Congress for its abysmal choice of speakers.  We encourage the IRS to re-evaluate whether the Muslim Congress is truly operating consistent with the exempt purposes under our tax laws and is entitled to maintain its tax-exempt status.”

Boca Raton, Fla., July 5, 2018 … The Anti-Defamation League (ADL) today called on the leadership of the Muslim Congress to stand up to bigotry by removing two anti-Semitic speakers who are scheduled to appear at ‘Islam: The Religion of Hope’ – the 14th annual conference of the Muslim Congress, July 6-8, 2018 in Orlando.  The invited speakers include a notorious anti-Semitic conspiracy theorist who blames Jews for controlling world events, and a writer for a pro-Hezbollah publication.

“It is deeply disturbing that these speakers made it onto the program of a conference otherwise concerned with Muslim religious and cultural matters,” said Sheri Zvi, ADL Florida Regional Director. “The ideas they promote are reprehensible and hateful. We urge the Muslim Congress to stand up to bigotry by removing these speakers from the conference agenda.”

One of the speakers is Kevin Barrett, an anti-Semitic conspiracy theorist who promotes the idea that Israel and Zionists are behind various terrorist attacks and world events, including the 9/11 attacks and the creation of ISIS. Barrett regularly claims that terrorist acts carried out by Muslim extremists are ‘false flag’ operations perpetrated by Israel in order to “incite hatred of Muslims and solidarity with Israel.”

Barrett operatesTruth Jihad, a website and internet radio show, which he uses as a vehicle to spread 9/11 anti-Semitic conspiracy theories. He is a co-founder of Muslims for 9/11 Truth, a blog that falsely disputes the fact that Islamic extremists were behind the 9/11 attacks. Barrett also is a frequent contributor to Iran’s English-language propaganda news network Press TV.

In 2015, Barrett went on a Midwest speaking tour to promote his new anti-Semitic and conspiratorial book,We are Not Charlie Hebdo! Free Thinkers Question the French 9/11. The book features essays by Barrett as well as from 21 others, most of which claim that the shootings at the Charlie Hebdo headquarters and at a kosher market in Paris in 2015 were a ‘false flag operation’ perpetrated by any number of culprits including the Israeli government, the United States government, and/or the French government. For more information on Barrett,see here.

Mohammad al-Asi, a Washington, D.C.-based Muslim activist, also is scheduled to speak at this conference. His speeches and articles portray Israel and Zionism as the final stage in a long process of corruption of the Jewish people.

This is not the first time that the Muslim Congress has hosted problematic speakers like these. Previously, the Muslim Congress conference has hosted Imam Abdul Alim Musa, the founder of Sabiqun—an anti-Semitic Muslim group that advocates for the creation of a global Islamic state that would abolish all ‘man-made’ forms of governance. For more on Imam Musa, click here.  [emphasis added to parts of this]