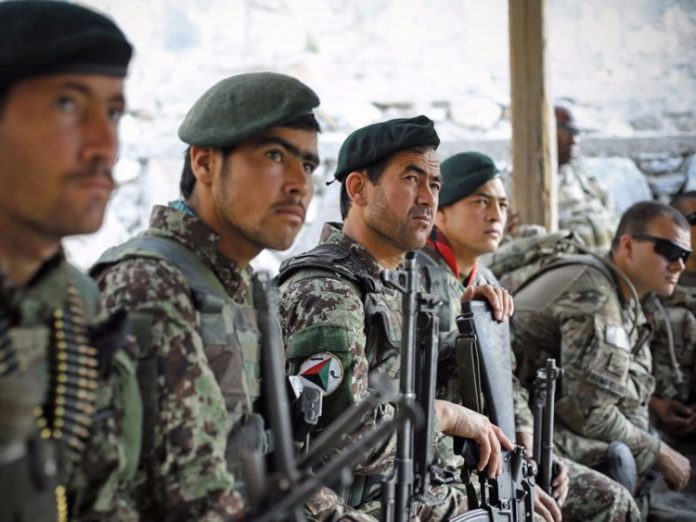 One of the most commonly repeated elements of the Leftist/Islamic supremacist rap sheet against me, supposedly establishing that I am an “anti-Muslim extremist,” is that I said that there was no reliable way to distinguish between peaceful Muslims and jihadists, and no distinction between the two in Muslim communities. Yet if I were wrong in saying that, this American service member would be alive today, because the jihadi who murdered him or her would never have been accepted into the Afghan National Army.

KABUL, Afghanistan — An American service member was killed and two others were wounded in southern Afghanistan on Saturday in what officials described as an “apparent insider attack.”

The United States military, announcing the death in a statement, did not provide further details. The wounded service members were in stable condition, the military said. The name of the soldier who was killed was being withheld so the next of kin could be notified.

An American military officer familiar with the attack said it had occurred at a small base in Tarinkot, a town in Uruzgan Province, where roughly 150 soldiers who are stationed in Kandahar often rotate through to train Afghan soldiers. The outpost is one of several in the country where the Army’s Security Force Assistance Brigade is stationed. The unit — tasked with training and assisting the Afghan National Army — is one of the leading elements of the Trump administration’s new strategy in Afghanistan….

It also offered a reminder that insider attacks, also known as green-on-blue attacks, have been a recurring problem in Afghanistan, carried out by Afghan security forces loyal to the Taliban or harboring grievances against American troops. About 150 troops from the American-led coalition have been killed in such attacks during the nearly 17-year-old war, according to data from the United States military, with the number of the attacks peaking in 2012.

The assault on Saturday is the first insider attack of 2018 against American troops, roughly 14,000 of whom are stationed in Afghanistan. In 2017, there were three such attacks on American forces and one against Romanian troops. In June of that year, three United States soldiers were killed in Nangarhar Province when an Afghan commando opened fire at a small outpost used in the battle against Islamic State militants….