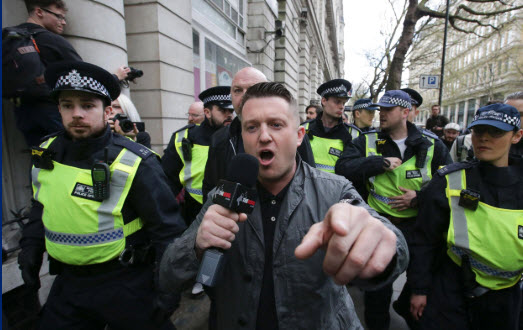 PHILADELPHIA – July 8, 2018 – Tommy Robinson, the imprisoned English counter-Islamist activist, journalist, and book author, justifiably titled his autobiography Enemy of the State, for he has long been a target of the U.K. authorities impatient with his criticism of Islamism.

The Middle East Forum (MEF) is helping Robinson in his moment of danger. It does so in the context of its Legal Project which since 2007 has defended activists, journalists, politicians, et al. who face harassment, fines, or imprisonment because of their views concerning Islamism and related topics.

MEF, along with a coalition of UK advocacy groups and international figures will assemble to advocate for Mr. Robinson’s release and demand greater protections for freedom of speech and freedom of the press in the United Kingdom. MEF is arranging for U.S. Congressman Paul Gosar (Republican of Arizona) to travel to London to speak alongside the Dutch political leader Geert Wilders, and others.

The latest incident began on May 25 with Mr. Robinson reporting on a rape-grooming trial involving Muslim defendants in Leeds, England, for which he was arrested, tried, convicted, sentenced to 13 months prison, and jailed – all in the course of a few hours. To make matters worse, he was tricked out of the right to confer with counsel. Now, he has been moved to historically violent Olney prison, where he is a potential target of Islamist gangs.

“The police allow rape gangs to operate for decades but swoop down within minutes on Tommy Robinson for a peccadillo,” notes Forum president Daniel Pipes. “We worry that his life is now in immediate peril.”