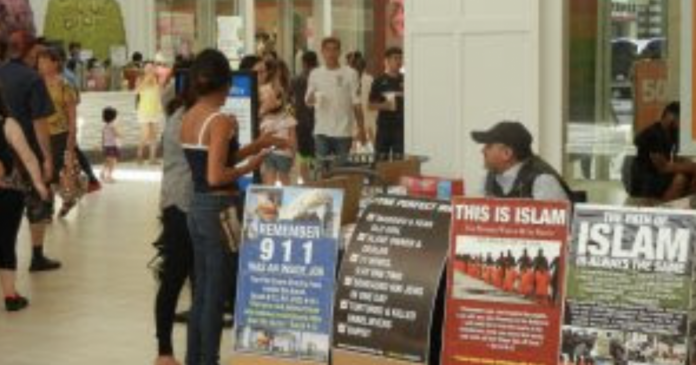 Steve Amundson is the founder of the Counter Jihad Coalition (CTC), an organization dedicated to countering jihad on the streets. On Saturday, July 7, 2018, Amundson was at the Los Cerritos shopping mall with a pastor passing out literature about Islam and the threat is poses to America and other Western nations.

CJC, which received pre-approved permission from the mall to have a booth experienced what appears to be an attempted but thwarted act of terror against their anti-terror booth inside the mall.

While passing out literature, Amundson says an unidentified Muslim man who was wearing a backpack approached his colleague. According to Amundson, the Muslim man became irate and began arguing with the Pastor who was sitting at the table. Before leaving the table, Amundson says he witnessed the Muslim man strategically place his backpack underneath the CJC booth and walk away.

The events that unfolded next are shocking, and quite disturbing. Amundson told Big League Politics that after he alerted mall security, they approached the man and asked him if the backpack was his. The man said the backpack did belong to him, but he then refused to retrieve his backpack that he had placed underneath the CJC booth before walking away.

Over the past six months that Amundson and his colleagues have been tabling, he has experienced an increase in physical attacks against himself and his booth. For this reason, Amundson says he and his colleagues are trained to detect security threats and what they call “red flags”. While passing out literature on Saturday, Amundson says he witnessed and documented several red flags at the Los Cerritos Shopping Center.

The first red flag occurred when two Muslim men inside the mall began snapping pictures of the CJC booth and making phone calls shortly after. Amundson witnessed this and recognized it as “red flag one.”

The second red flag occurred when two Muslim women approached the booth and began cursing at the CJC’s booth operators, calling them liars. Mall security observed the hostile interaction and began speaking to the two women. It was at that moment when the two Muslim women distracted security that a white haired Muslim male walked over to the booth and slid his backpack under that table.

“I told security he left a backpack underneath our booth. The Muslim refused to take the backpack. We started to take cover behind cement pillars and told security to either call the bomb squad or have the guy pick up the backpack,” Amundson said. “He finally agreed to very carefully pick it up and security escorted him away. Security will not say at least right now if he was arrested, if the bomb squad was called or what. Was this a dry run or the real thing”?

According to Amundson, it is unknown whether mall security or police searched the Muslim man’s backpack, and the Los Angeles Sheriff’s Office has not yet released a statement about the events that transpired.

Amundson’s experience at the shopping center is disturbing and concerning for many reasons, primarily because it appears as though the mall security and Sheriff’s Office are actively working to keep the public and Amundson in the dark about what appears to be a dry run of a jihadi attack. What happened to Amundson at the shopping center is a very serious incident the needs to be further investigated and disclosed to the public to ensure that people are aware of the threat that is clearly present within their own community.

The fact that police and mall security are not disclosing to Amundson and the public the contents of the man’s back pack and why he placed it under the Counter Jihad table is egregious, given the fact that acts of terrorism involving a similar tactics have been carried out across the United States and Europe, as jihadis continue to increase their aggressiveness, outreach, recruitment, and continued violence and attacks here in the United States.

In October of 2017, Vicente A. Solano was arrested at Dolphin Mall in Miami, Florida after police say he was attempting to blow up the mall with a bomb he placed inside a shopping bag.  Police say the man had been making ISIS videos and was being monitored by the FBI before he was arrested by agents at the mall where he was planning on setting off a bomb inside the food court.

Amundson’s said a police report has been filed, and that police and mall security have a picture of the Muslim man who placed the backpack underneath the CJC table.

When Amundson returned to the mall to fill out another application to have another booth inside the shopping center on Saturday, mall security rejected his application in an email. “We reviewed the application for July 21, and we are not able to approve it under the circumstances.  We base our decision upon our significant safety concern, which we discussed with you last week after having reviewed the Center’s video footage and your organization’s description of the incident as a credible threat of violence or “dry-run,” along with photos on its website.  While we understand your organization’s right to engage in free speech subject to reasonable time, place and manner rules, we must consider the safety of the Center’s patrons,” said mall security from Los Cerritos Shopping Center.

According to Los Cerritos Shopping Center’s statement, it is evident that the mall security has chosen to appease the violent and overly aggressive Muslims who were screaming at Amundson and the Pastor at the CJC booth by not allowing Amundson and his colleagues to have their booth. Instead of explaining what type of credible threat was present and what was seen on the video footage mentioned in the statement, mall security chose to punish Amundson, who ultimately was targeted and harassed by Muslims inside the mall for exercising his free speech at a booth he had permission to use while passing out literature. Amundson is essentially being punished for speaking up when he saw what he believed was an attempt by an angry Muslim man to set off a bomb inside the mall in an attempt to silence critics of Islam.

It is rather egregious for Los Cerritos Shopping Center to claim that Amundson’s booth, as opposed to an aggressive Muslim placing a backpack under a table inside the mall and refusing to pick it up, is what would jeopardize the safety of the Center’s patrons.

Americans are constantly told, ‘If you see something, say something”, and they are constantly reminded at entertainment events and at airports to alert security if they come across unclaimed bags or backpacks, as it is through unclaimed bags and back backs that terrorists often set off explosions in crowded places. However, as Amundon’s experience further proves, when Americans do speak up and say something when they see something, they are punished and often accused of being racist or Islamophobic. It is for this very reason that many terror suspects and jihadis go unreported and why acts of terrorism that could have been prevented occur. People who dare speak up are often treated worse than the criminals and terrorist suspects themselves, which makes it more of a hassle for average Americans to speak up and file reports with law enforcement officials.

Patrons of the Los Cerritos Shopping Center should be more concerned about Muslims potentially placing explosives inside backpacks at the mall, not a man who is peacefully passing out pamphlets about Islam and Sharia Law in an attempt to educate people about the threat Islam poses to America.

It is a common tactic used by Islamists to use violence and intimidation to silence those who speak out against Islam. The evidence laid out suggests Islamists attempted to bomb, or conduct a dry run at the Los Cerritos Center in California on July 7, 2018. The frightening incident that Amundson and his colleagues experienced and reported to the mall security at Los Cerritos Center, as well as the Los Angeles Sheriff’s Office is one of numerous incidents across the United States that have been carried out by jihadis who wish to silence those educate the public about the threat of Islam.

This is a developing investigative report, and Big League Politics will be monitoring it closely and updating the story.