Police forces entered the Al-Aqsa Mosque during clashes with Muslim worshipers Friday afternoon that led to an hours-long closure of the Jerusalem holy site.

The highly unusual decision to forcibly expel Palestinians from the mosque was ordered by Jerusalem police commander Yoram Halevi, police said, and came after dozens of people barricaded themselves in the house of worship.

The Al-Aqsa Mosque is the third holiest site in Islam and sits atop the Temple Mount, the most sacred place in Judaism and revered as the home of the ancient Jewish Temples.

Shortly after police announced officers had entered the mosque, the AFP news agency reported the gates to the Temple Mount had been reopened, some four hours after police first shuttered the site.

The compound was reopened, with worshipers flooding in to pray, an AFP photographer said. 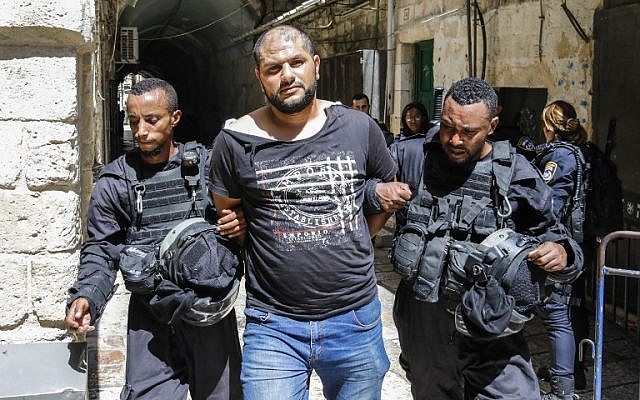 Israeli security forces take a Muslim man into custody who was arrested during clashes at the Temple Mount compound in the Old City of Jerusalem on July 27, 2018. (AFP Photo/Ahmad Gharabli)

The closure of the Temple Mount and decision to clear out worshipers came after police said they were attacked with fireworks and stones following Friday afternoon prayers.

Police arrested 24 suspects during the clashes, 16 of whom had barricaded themselves in the mosque, and said further arrests were expected. Additionally, four officers received medical treatment after being injured in the riots.

“The police intend to act with a strong and uncompromising hand against the suspects who were arrested and others involved,” a police spokesperson said in a statement.

The Waqf, the religious authority that governs the site, published videos showing police firing tear gas at Palestinians inside the mosque compound. 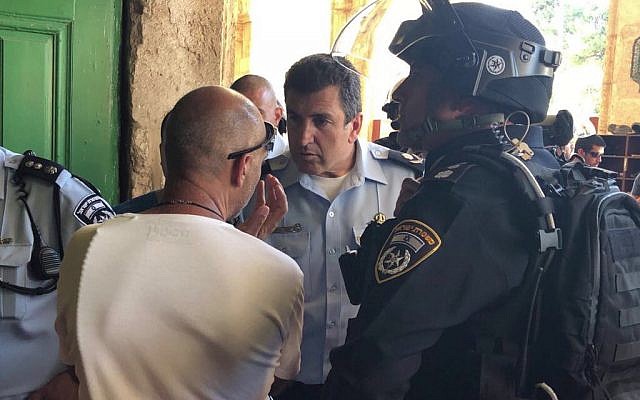 Jerusalem police commander Yoram Halevi is seen outside the Al-Aqsa Mosque during clashes at the Temple Mount in the Old City of Jerusalem on July 27, 2018. (Police Spokesperson)

Jordan, which is recognized as the custodian of religious sites in Jerusalem, criticized the Israeli measures.

In a statement, a government spokesman condemned the “ongoing violations and provocations against the holy Al-Aqsa mosque, especially the Israeli police storming the mosque today and its aggression against the worshipers.”

Ahmed Tibi, an Arab member of the Knesset, accused Israeli officials of overreacting.

After the fireworks were thrown, he told AFP at the site, “it was calm, why did they close the gates? There is nothing justifying closing them.”

Palestinians said the events began with a parade at the site known to Muslims as the Haram al-Sharif, to mark the anniversary of Israel removing metal detectors that were temporarily placed at the entrance to the holy site following a terror attack there.

Israel installed security measures, including metal detectors, at the entrances to the site in response to a July 14, 2017, attack in which three Arab Israelis shot dead two police officers near the Lions Gate. They used weapons they had stored at the mosque.

For almost two weeks, Muslim worshipers stayed out of the sacred Jerusalem compound as protests and deadly unrest continued in and around East Jerusalem and the West Bank.

Instead, worshipers performed mass prayer protests outside the shrine, some of which devolved into clashes with Israeli security forces. 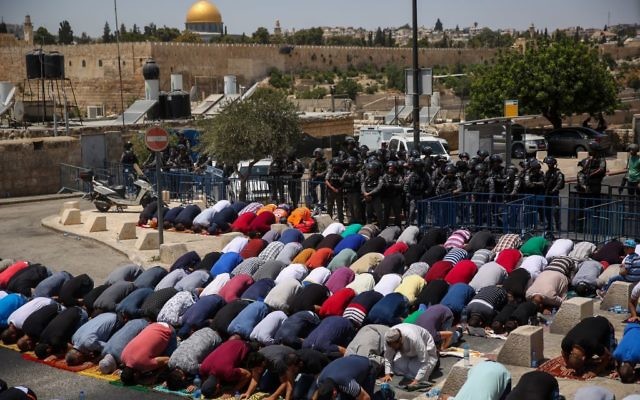 The security measures, which included scaffolding, railings and cameras in addition to metal detectors, were removed on July 27, 2017. The removal of the railings and scaffolding prompted celebrations by Palestinians, who danced, whistled and honked their horns near the site.

Palestinians perceived the security measures as a move by Israel to assert further control over the site, a charge Israel has repeatedly denied.

Ir Amim, a left-wing Israeli group, on Friday blamed the new riots on an increase in the number of Jews visiting the site and on calls to allow Jews to pray there.

Three weeks ago, Prime Minister Benjamin Netanyahu lifted a three-year ban on lawmakers entering the flashpoint holy site and on Sunday a record number of Jews were reported to visit the Temple Mount to mark the Tisha B’Av fast mourning the destruction of the biblical temples.

Under an arrangement in place since Israel captured Jerusalem’s Old City in the Six Day War in 1967 and extended its sovereignty there, non-Muslims are allowed access to the site but are forbidden to pray there. Under this status quo, Israel is responsible for security at the site while the Jordanian trust — the Waqf — is in charge of administrative duties.