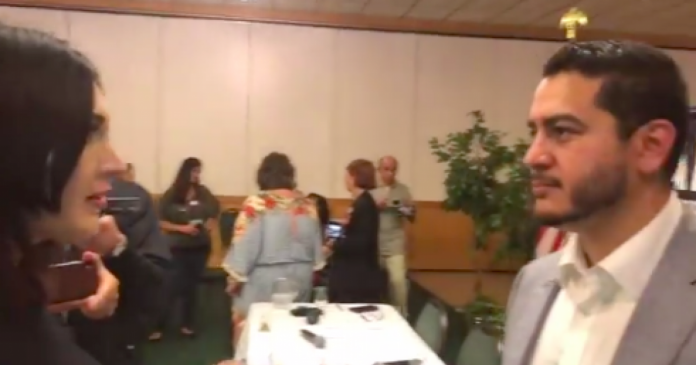 A Big League Politics contributor confronted a progressive Democrat gubernatorial candidate at a Michigan campaign event last week to find out if his Sharia-compliant lifestyle comports with the progressive agenda.

“I just wanted to know how you reconcile your own personal practice of Islamic law with your Marxist socialist political platform that directly contradicts tenets within Islamic law,” Laura Loomer asked Abdul El-Sayed, a candidate for governor in Michigan.

Initially, El-Sayed laughed off her question.

“My faith is about what I choose to do with my life,” he said. “I think that’s what faith is. It’s a choice that people make about how they live their life.”

Loomer pressed him further, asking him why gay people, who are subject to the death penalty by Sharia Law-practicing Muslims should vote for him. She asked the same about why Jews, who are targeted by radical Islamists for their faith.

He dodged her questions before Loomer was chased away by his aides.

MUST WATCH: I CONFRONTED @AbdulElSayed, the Sharia compliant candidate running to become the next Governor of #Michigan. He dodged my questions & ran away from me when I asked him why ppl should vote for a man who embraces Sharia, which calls for the killing of Jews & Christians. pic.twitter.com/R5FETIT4sT

El-Sayed has been campaigning with socialist “it-girl” Alexandia Ocasio-Cortez, who recently won a Democratic primary for U.S. Congress in New York.

The two millennial  candidates represent a Democrat party that, in the absence of any real policy platforms to oppose President Donald J. Trump, has moved further towards the radical left instead of towards the political center.