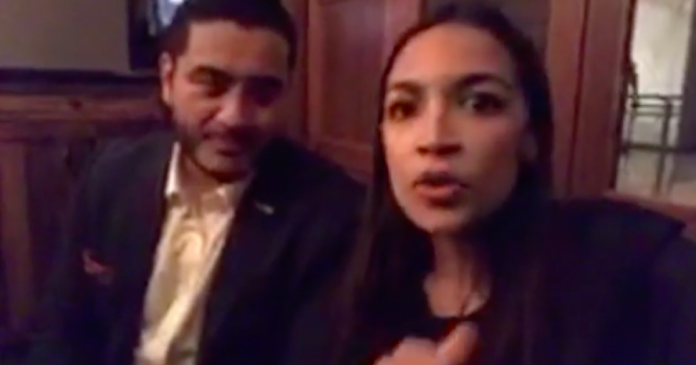 A socialist candidate for U.S. Congress from New York spent some time in Michigan over the weekend rallying with another progressive Democrat.

Big League Politics contributor Laura Loomer was in Michigan for one of the gubernatorial candidate’s events, where she confronted the candidate. She asked El-Sayed if his Sharia-compliant Islamic faith comports with his progressive agenda, and why voters should vote for a man whose religion calls for the deaths of Jews and Christians.

The candidate, as expected did not have much in the way of answers. His staff quickly chased Loomer away.

Ocasio-Cortez, on the other hand, is fresh off slamming Jews as “occupiers of Palestine.”

“I also think that what people are starting to see in the occupation of Palestine is just an increasing crisis of humanitarian condition,” she said. “And that, to me, is just where I tend to come from on this issue.”

She then explained further:

“Oh, um… I think what I meant is, like, the settlements that are increasing in some of these areas, in places where, um, Palestinians are experiencing, um, difficulty and access to their housing and homes.”

The two, El-Sayed and Ocasio-Cortez make the perfect match to be the faces of the clueless progressive left. Ocasio-Cortez has been so publicly embarrassing to the left that some have even condemned her.

He urged Democrats to vote for incumbent Rep. Joe Crowley, whose name will still appear on the voting ballot in November though he lost the primary election.

“Ms. Ocasio-Cortez is a proud member of the Democratic Socialists of America, whose platform, like hers, is more Socialist than Democratic,” Lieberman wrote. “Her dreams of new federal spending would bankrupt the country or require very large tax increases, including on the working class.”

The two candidates appeared together in Facebook live video.