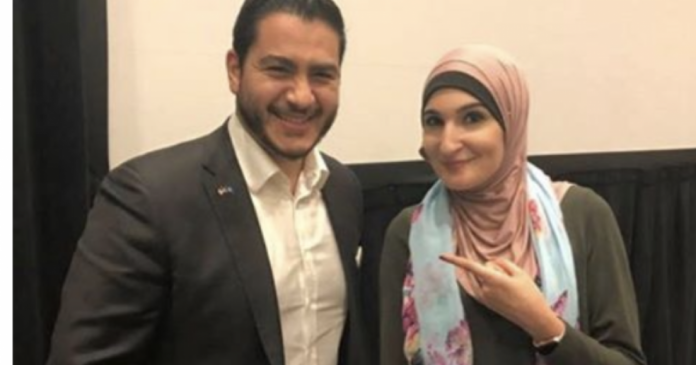 Abdul El-Sayed is a Democrat Socialist gubernatorial candidate in Michigan. Although El-Sayed is currently third in the polls, the Democrats and their activists, including Linda Sarsour, Bernie Sanders, and Alexandria Ocasio-Cortez have been vigorously campaigning for him. On July 1, 2017, Linda Sarsour gave a speech at the 54th Annual Islamic Society of North America (ISNA) Convention in Chicago. During that speech, Sarsour not only infamously called for Muslims to carry out Jihad against President Trump, but she also used her speech as an opportunity to introduce Abdul El-Sayed to more Muslim organizations in an attempt to help Abdul fundraise for his gubernatorial campaign.

While giving her speech, Sarsour called on the Muslims in attendance to support Abdul El-Sayed. 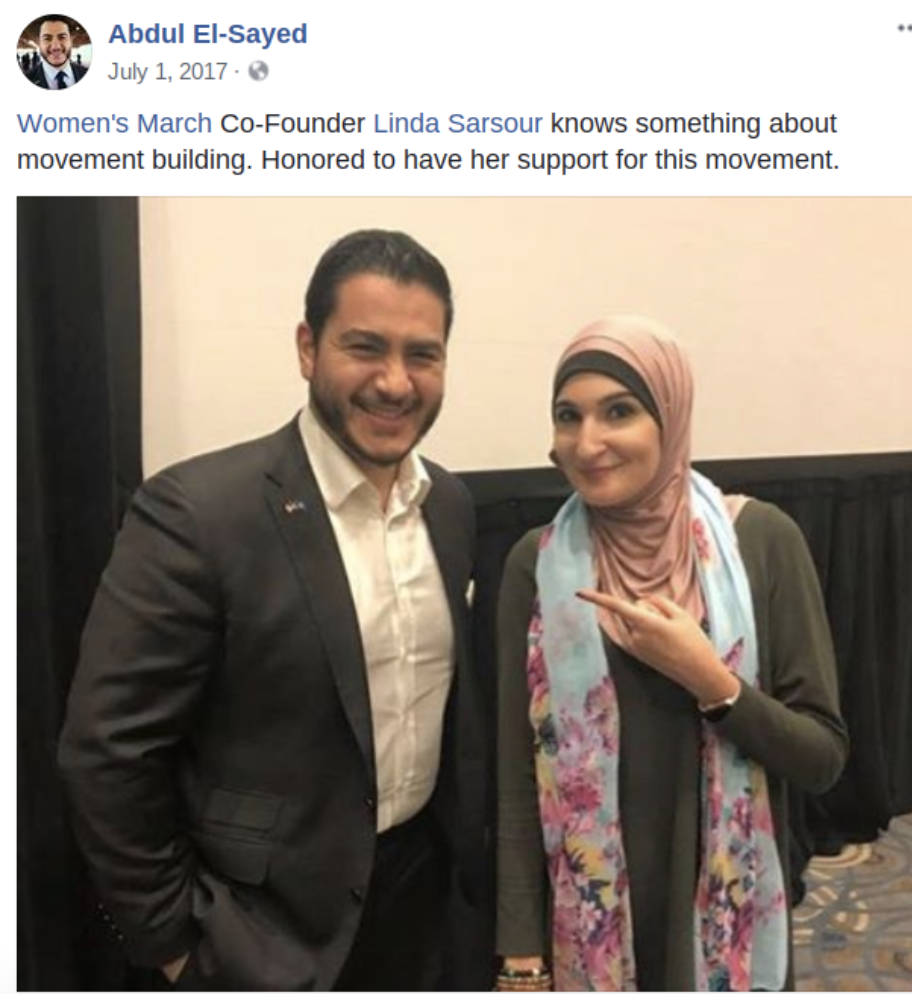 After endorsing El-Sayed on stage at the ISNA Conference, Sarsour, during the same speech took several minutes to praise Imam Siraj Wahhaj, who is a terrorist co-conspirator in the 1993 World Trade Center Bombing, calling him her “mentor” and “favorite person”.

“And to my favorite person in this room, that’s mutual, is Imam Siraj Wahhaj, who has been a mentor, motivator, and encourager of mine. Someone who has taught me to speak truth to power, and not worry about the consequences. Someone who has taught me that we are on this Earth to please Allah and only Allah, and that we are not here to please any man or woman on this earth.” Sarsour said. “So I am grateful to you Imam Siraj, and you might think this is weird, but every once in a while, when I get into that deep dark place, Imam Siraj comes and talks to me. And he helps me to emerge out of those places, so I’m grateful to you Imam Siraj, and may Allah bless you and protect you for a long time for our community, because we need you now more than ever.”

Not only is Siraj a well-known terrorist who tried to blow up the World Trade Center in 1993, but he often calls for the killing of innocents in the name of Islam. Siraj once said,

While fully aware that Siraj is a terrorist co-conspirator, a proponent of Islamic terror, and a supporter of destroying and replacing the U.S. Constitution with Sharia Law, Sarsour still proclaimed Siraj as her mentor and called on him to support Abdul El-Sayed’s campaign for Michigan Governor.

Picture this: two people are having a fundraiser at an (insert group here: ISIS, al- Qaeda, NAZI, Skinhead, Communist) event and praising a (insert name of terrorist or extremist here: Al-Baghdadi, Osama Bin Laden, Adolf Hitler, Stalin). Now, you would say (assuming you’re not a member of one of the above groups) that regardless of whom they are, what religion they are following, or what political party they are representing, that those two people are very bad people? If you take it one step further and look at who is sponsoring the fundraiser, it is safe to say that the hosting organization is also bad, since it is common knowledge that terrorism itself is very bad. A good person is not one who associates with terrorists.

Fortunately, there is an adjudicated and peer reviewed document that was created during the largest terrorism financing trial ever conducted in the United States, know as the The Holy Land Foundation trial. During this trial a federal judge declared,

“The Government has produced ample evidence establishing the associations of CAIR, ISNA, and NAIT with the HLF, IAP, and with Hamas.”

This conclusion was then appealed before the 5th Circuit Court of Appeals where it was determined once again,

“The Government has produced ample evidence establishing the associations of CAIR, ISNA, and NAIT with the HLF, IAP, and with Hamas.”

To reiterate that again, federal prosecutors, two separate Federal Judges, and the 5th Circuit Court of Appeals all agreed that there is enough evidence to establish Islamic terrorist associations with CAIR and ISNA, both of whom are involved with El-Sayed’s campaign.

Assuming that US District Court Judge Jorge Solis, US District Court Judge Marcia Crone, 5th Circuit Court of Appeals Judges Benavides and Emilio Garza and the federal prosecutors are not all “racist Islamophobes”, we can safely say that ISNA (Islamic Society of North America) is a terrorist front group for HAMAS, which itself is a designated terrorist organization as stated  by the U.S. State Department.

Now, let’s take a look at the facts and determine whether or not Linda Sarsour and Abdul El- Syed are supporting Islamic terrorists. Linda Sarsour was a featured speaker at the 54th Annual Convention of the Islamic Society of North America (ISNA – a terrorist front organization for HAMAS). During her speech, she said Siraj Wihhaj is one of her idols and described him as her “favorite person, mentor, motivator, and encourager”. Sarsour also said she hears his voice inside her head under times of stress. However, during her speech, Sarsour made no mention of Siraj Wahhaj’s numerous ties to Islamic terrorism.

Siraj Wihhaj’s ties to Islamic Terrorism are well documented in a dossier published by “Discover The Networks”.

Shortly after the 1993 World Trade Center bombing, the U.S. State Department designated Sudan, which had become a safe-haven for Osama bin Laden and al Qaeda, as a state sponsor of terrorism. In response to that designation, Wahhaj said defiantly:

“May Allah bless Sudan … these are people who want to establish the Shari’ah, establish Quran, and Sunnah, they want to establish the religion and therefore hated by the government of the USA…. I’m not going to make you comfortable because our book, the book we believe in, is not Dale Carnegie’s, How to Win Friends and Influence People;But it’s the Quran.”

Given this indisputable evidence, there is no denying the fact that Linda Sarsour and Abdul El- Sayed are radicalized individuals who pose a serious terror threat to America. Not only are they personal friends, but they are campaigning together throughout Michigan and held a fundraiser for El-Sayed at the ISNA conference the same day they praised the accomplishments of Imam Siraj, a well-known terrorist.

Despite knowing all of this, and despite being in attendance at the ISNA conference and in the audience while Sarsour gave her speech, El-Sayed has not distanced himself from Sarsour or Imam Siraj.

This is the start of a movement. Thank you all. pic.twitter.com/ysANmBCyIR

Currently, Sarsour is serving as El-Sayed’s de-facto campaign manager. She has been seen at numerous socialist campaign events across the country where she, alongside other Democrat Party surrogates have been encouraging Democrat Socialists to vote for El-Sayed so that he can become the first Muslim Governor of Michigan. Along with Sarsour, failed Presidential candidate Bernie Sanders, and self proclaimed socialist Alexandria Ocasio-Cortez are also campaigning in Michigan and across the country for El-Sayed.

I’m proud to endorse @AbdulElSayed for Governor of Michigan. As governor, Dr. El-Sayed will fight for a government in Lansing that represents all the people, and not just wealthy special interests. https://t.co/L4sXyHeEYr

Voters in Michigan will have the choice to say no to Islamic terrorism on August 7 when they flock to the polls to vote in their primary.