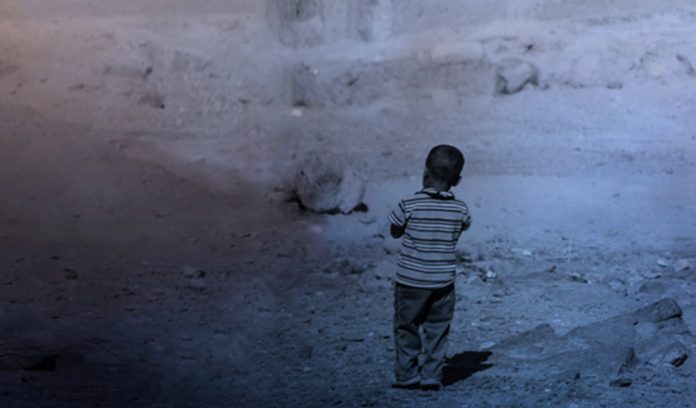 The New Mexico authorities have announced heart-breaking news: The remains of a boy have been found at the Islamist compound that was raided on Friday.

It is almost certainly the body of disabled toddler Abdul-Ghani Wahhaj, who has been missing for nine months after being abducted by his father, Siraj Ibn Wahhaj, and brought to the compound with 11 other malnourished children.

The day the remains were found would have been his fourth birthday.

The pain one experiences from reading the story is increased exponentially by a reality that is difficult to accept: The boy might have been saved if the FBI had acted, instead of stalling until the New Mexico police finally went in on their own.

Abdul-Ghani Wahhaj went missing on December 1, 2017, abducted by his father, Siraj Ibn Wahhaj. The boy’s mother, Hakeemah Ramzi, went to the police. The boy’s parents had been married for 15 years, according to press reports. It is unclear what sparked the sudden rift within the Wahhaj family.

Siraj Ibn Wahhaj attributed his son’s disabilities to demonic beings and believed that only an Islamic exorcism would expel the demons, a fact reported by the Clarion Intelligence Network’s sources before it was confirmed publicly in a search warrant.

The boy’s medication was left behind, putting him in peril. Sources say the rejection of medical treatment points to the fact that the ideology held by Wahhaj and his co-conspirators stems not from traditional Islamism but to a cultish fringe.

The kidnapper is the son of radical Imam Siraj Wahhaj in Brooklyn, one of the most powerful Islamic leaders in the country. He heads the Masjid at-Tawa mosque and the Muslim Alliance in North America, both of which have a long history of extremism and ties to terrorism, including weapons training and acquirement.

Siraj Ibn Wahhaj and his co-conspirators likely learned their skills in this regard through this Islamist network even if they later had a falling out with Imam Wahhaj and joined a more fringe cult-like movement. Clarion Intelligence Network has been providing information to the necessary authorities in this regard.

He had also set up a security-related company as a front.

The boy was seen with his father and other adults and children in Alabama on December 13 at the scene of a car accident. They told the police officer on the scene they were going to New Mexico to go camping.

The Compound is Discovered

Press reports indicate the compound was first set up in late December. It is still unknown exactly why and when the spot was chosen. Our law enforcement sources are certain there is a bigger story behind it.

Neighbors saw Abdul-Ghani Wahhaj at the compound in January and February.

A couple, Jason and Tanya Badger, went to the police in late April or early May once they did an internet search of Siraj Ibn Wahhaj and discovered he was a wanted a fugitive and the boy was missing.

Furthermore, the Badgers were involved in a property dispute with Siraj Ibn Wahhaj and his co-conspirators. According to the search warrant, Lucas “Luqman” Morton had purchased land nearby but accidentally built the compound on the Badgers’ land. The Badgers were trying to negotiate a land deal to settle the issue.

The Badgers gave permission to the FBI to search the compound, as it was on their own private property.

How the FBI Dropped the Ball

By early May, the FBI had strong evidence the fugitive believed to have the missing boy in custody was at the New Mexico compound. The legal owners of at least part of the land that the property was on had given permission for a search, making a “probable cause” standard for a search warrant unnecessary.

The FBI also knew this compound was inhabited by Islamist extremists and they were probably acquiring weapons. Our sources say there are indications they engaged in identity fraud and, most likely, other forms of fraud.

The FBI did not act decisively, even as the compound prepared for war and the children were in peril, especially the missing boy who was almost certainly there and whom the FBI knew was in desperate need of medication.

Yet instead of searching the property themselves, what did the FBI do?

They asked the neighbor, Jason Badger, to wear a hidden camera and risk his life by approaching an armed, Islamic extremist compound.

The FBI placed the compound under surveillance for at least two months before the raid, hoping to get a positive identification of the boy’s presence there—even though the extremists at the compound knew identification had to be prevented and had taken visible measures to make sure it didn’t happen.

The Badgers didn’t like the idea of having Islamist extremist neighbors who illegally squatted on their property. They filed a petition to have them evicted.

Their request for eviction—a very brazen move on the part of the Badgers—was rejected by a judge in June.

During an August 7 news conference, a reporter asked why that wasn’t enough for the authorities to go in. The police spokesperson said it was a civil matter and not grounds for a search warrant. The extremists and starving children got to stay.

The trigger for the raid was when the New Mexico police were provided a message by the authorities in Georgia.

A message had come out of the compound. It said the children were starving and they needed food and water.

The New Mexico authorities decided to go in on their own search warrant.

The bravery shown by the New Mexico police — who were moved to save the children – can only be imaged.

The compound is on 10 acres of land in the middle of nowhere, making impossible any element of surprise. The police involved in the raid knew there was an enormous chance of a deadly shootout which could have incurred multiple casualties on the part of the police officers.

Sources aware of the investigation described the property as essentially a “training camp” with a shooting range. Neighbors had reported hearing gunfire consistently over the months. The camp looked like it was a compilation of trash, but close observation showed that it was not the handiwork of amateurs.

Tires formed a defensive perimeter. A trailer was half-buried and covered in plastic to stop outsiders from seeing what was going on inside. Various measures had been taken to detect “visitors” and impede an expected raid — wood with nails sticking out it and shattered glass were scattered on the property to alert residents of any intruders.

“It had to be a search warrant and a tactical approach to our own security, because we had learned that the inmates were most likely heavily armed and regarded as extremist of the Muslim faith,” an official from the Taos County Sheriff’s Office explained.

The two men, Siraj Ibn Wahhaj and Lucas Morten, initially did not comply with police orders.

Siraj Ibn Wahhaj had a loaded firearm on him when he was “taken down.”

Between the two of them, they had an AR-15 rifle, four loaded pistols and five loaded 30-round magazines, at the very least. They were obviously preparing to violently resist.

Footage of a walk through the compound shows the Islamist extremists were gearing up for a protracted battle.

Authorities found a 150-foot tunnel with cutouts where sleeping bags were stored so they could hide underground. There was a ladder and a hidden exit outside of Morton’s property for escape.

All told, it was a miracle that a Waco-like shootout did not commence during the raid which occurred on Friday, August 3, 2018.

In sum, five people were arrested and 11 children were rescued. Their condition was likened to that of refugees from a Third World country. Their ribs could be seen because they hadn’t eaten. The police gave them whatever water and snacks they had on them at the time.

The children reportedly appeared “brainwashed” and in great fear.

One boy remained still missing. On Monday, during a follow-up search, a corpse, likely that of the boy, was found.

Shocking Discovery of the Neighbors Post-Raid

The New Mexico police said they searched the compound as best they could with their limited resources.

On Sunday, about two days after the raid on Friday, the Badgers went into the compound to look around. They were shocked by what they found left behind.

The police had failed to seize guns, video cameras, a laptop computer and a tactical vest.

These are key items for prosecution and intelligence; ones that an unidentified co-conspirator would love to have retrieved after the ending of a search. Yet, they were left behind.

While the ultimate responsibility for the death and any injuries lies with the adults responsible, with a look at the information that is currently being reported, it is hard not to wonder what the FBI was waiting for.

We do not know when the boy died, assuming the body that was found was his. Yet, whether quicker, more decisive action could have saved his life is a question that must be answered.

And if the FBI felt it couldn’t act in this situation, then what other dangerous situations with even less evidence aren’t being handled decisively?

What would have stopped the compound leaders from carrying out an attack, abusing the children even more seriously, or deciding to end their lives in a manner reminiscent of Jim Jones or the Branch Davidians at Waco?

If the FBI’s standard for action requires evidence and danger even greater than what was known about the New Mexico compound, then its standard must change.