The Hamas terrorist group on Friday said the so-called “March of Return” border demonstrations would continue unimpeded later in the day, despite a cessation of hostilities with Israel clinched the night before.

The announcement came after a 12-hour lull in fighting, following two days that saw the heaviest exchange of Palestinian rocket fire and reprisal Israeli airstrikes since the 2014 Gaza war.

For the past four months there have been near-weekly, violent protests along the Israel-Gaza border organized by Gaza’s Hamas rulers.

Hamas spokesman Hazem Qassim tweeted on Friday that demonstrators would continue to “break the siege” on the Gaza Strip.

“Every time the Israeli killing machine attempts to break our people’s will to continue its struggle and marches, it fails to do so,” he wrote. “Today our people will head to the ‘Marches of Return’ to challenge the Israeli war machine.”

“Our Palestinian people has a long-lasting, struggling soul,” the Hamas spokesperson wrote. “It will continue its resistance in all of its forms until it gains its freedom, independence and right to a dignified life.” 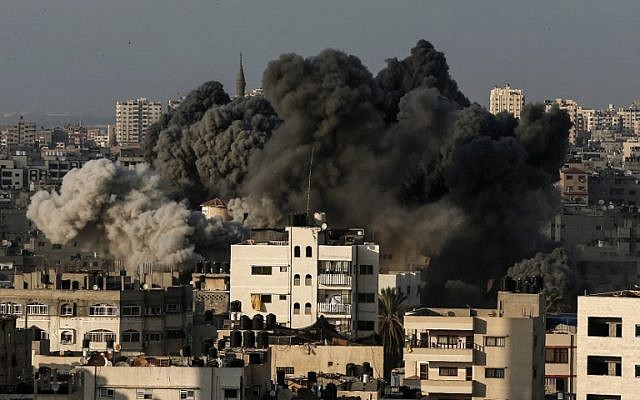 A plume of smoke rises from the remains of a building west of Gaza City that was targeted by the Israeli Air Force in response to a rocket attack that hit southern Israel earlier in the day on August 9, 2018. (Mahmud Hams/AFP)

Over the past four months the “March of Return” protests have led to deadly clashes which saw Israeli security forces facing gunfire, grenades, Molotov cocktails, and efforts — sometimes successful — to damage or cross the border fence.

At least 160 Palestinians have been killed by Israeli fire since the weekly protests began, the Hamas ministry says. Hamas has acknowledged that dozens of those killed were its members.

One Israeli soldier was shot dead by a Palestinian sniper.

In addition to the border clashes, southern Israel has experienced hundreds of fires as a result of incendiary kites and balloons flown over the border from Gaza. Over 7,000 acres of land have been burned, causing millions of shekels in damages, according to Israeli officials.

Adam Rasgon contributed to this report.