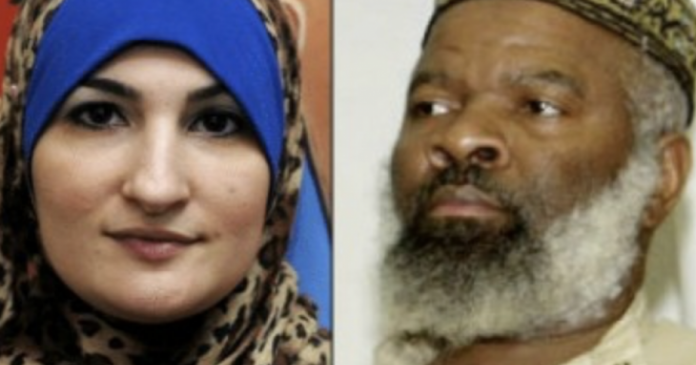 Two men who authorities described as armed “extremist Muslims” were arrested on August 8 in New Mexico after it was discovered that they had kidnapped 11 children who they were training to become “school shooters”.

One of the men who police arrested is Siraj Ibn Wahhaj, the son of the notorious Brooklyn, NYC Imam, Siraj Wahhaj who was found by prosecutors to be an un-indicted co-conspirator in the 1993 World Trade Center Bombing.

However, what the media is not talking about is the fact that Democrat surrogate and Women’s March organizer Linda Sarour and several Muslims who are currently running for Congress and Governor in the United States are also tied to  terror-tied Wahhaj. 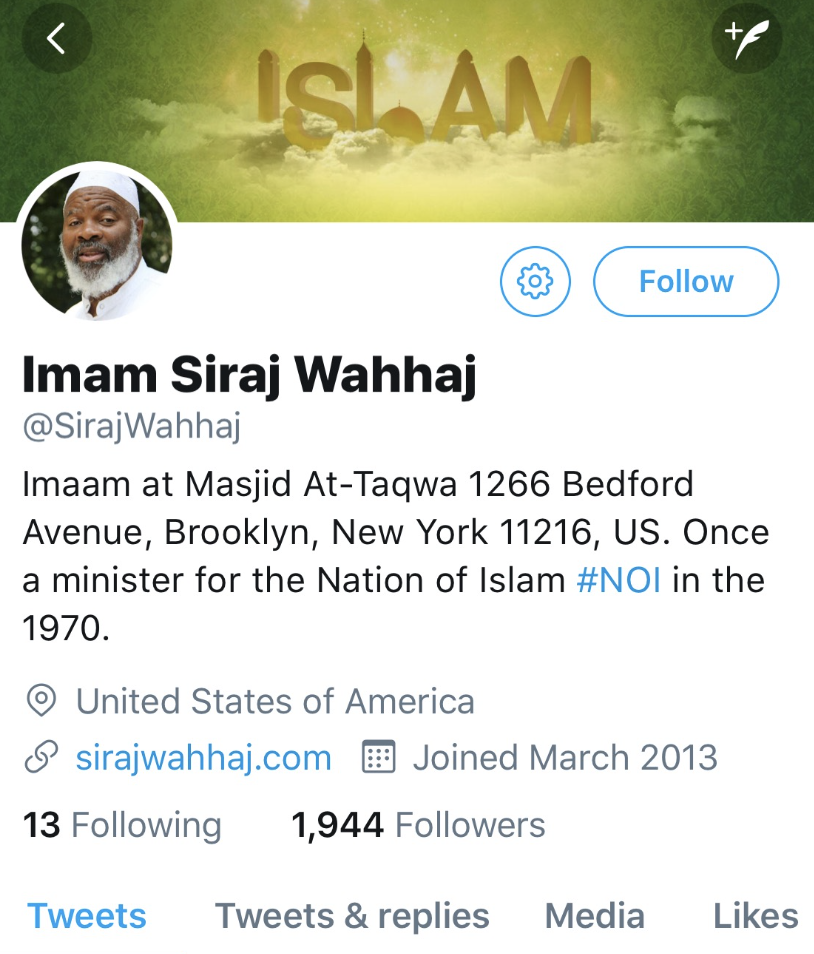 “The father of a missing Georgia boy was training children at a New Mexico compound to commit school shootings, prosecutors said in court documents obtained Wednesday,” according to Associated Press. “The documents say Siraj Ibn Wahhaj was conducting weapons training with assault rifles at the compound near the Colorado border where 11 hungry children were found in filthy conditions.”

Police say Ibn Wahhaj is the father of Abdul-ghani Wahhaj, who went missing from Jonesboro, GA in December. His remains are believed to have been found on the Jihadi compound, but investigators have not yet confirmed the identity of the remains.

On July 1, 2017, Linda Sarsour gave a speech at the 54th Annual Islamic Society of North America (ISNA) Convention in Chicago. During that speech, Sarsour not only infamously called for Muslims to carry out Jihad against President Trump, but she also used her speech as an opportunity to introduce Abdul El-Sayed to more Muslim organizations in an attempt to help Abdul fundraise for his gubernatorial campaign.

While giving her speech, Sarsour called on the Muslims in attendance to support Abdul El-Sayed.

After endorsing El-Sayed on stage at the ISNA Conference, Sarsour, during the same speech took several minutes to praise Imam Siraj Wahhaj, who is a terrorist co-conspirator in the 1993 World Trade Center Bombing, calling him her “mentor” and “favorite person”.

“And to my favorite person in this room, that’s mutual, is Imam Siraj Wahhaj, who has been a mentor, motivator, and encourager of mine. Someone who has taught me to speak truth to power, and not worry about the consequences. Someone who has taught me that we are on this Earth to please Allah and only Allah, and that we are not here to please any man or woman on this earth.” Sarsour said. “So I am grateful to you Imam Siraj, and you might think this is weird, but every once in a while, when I get into that deep dark place, Imam Siraj comes and talks to me. And he helps me to emerge out of those places, so I’m grateful to you Imam Siraj, and may Allah bless you and protect you for a long time for our community, because we need you now more than ever.”

Not only is Siraj a well-known terrorist who tried to blow up the World Trade Center in 1993, but he often calls for the killing of innocents in the name of Islam. Siraj once said,

While fully aware that Siraj is a terrorist co-conspirator, a proponent of Islamic terror, and a supporter of destroying and replacing the U.S. Constitution with Sharia Law, Sarsour still proclaimed Siraj as her mentor and called on him to support Abdul El-Sayed’s campaign for Michigan Governor.

There are nearly 90 Muslim candidates running for office across the United States this year. Two of the most high profile along with Abdul El-Sayed include Ilhan Omar, and Keith Ellison.

Ilhan Omar is currently a Representative for the Democrat-Farmer-Labor Party in the Minnesota House of Representatives, and she is running for Congress to take over Keith Ellison’s seat in Minnesota’s 5th Congressional District.

Omar, who is a Muslim immigrant from Somalia, has a history of making anti-Jewish remarks and has been endorsed and supported by some of the nation’s most notorious Jew haters.

Along with being pro-Hamas, Omar is also close friends with Sarsour. In November, Omar traveled to Dearborn, Michigan where she participated in political events with Sarsour, a rabid anti-Semite and pro-Hamas mouthpiece. Besides being an ardent supporter of Hamas and CAIR, both of which are Islamic terrorist organizations, Sarsour herself often tweets about her hatred for Israel, Zionism, and her desires to implement Sharia Law in the United States. Sarsour has also has endorsed Omar’s campaign. As if Sarsour’s lifelong ties to terrorism isn’t enough of a reason for American voters and the Democrat Party to distance themselves from her or anyone associated with her, she was also photographed smiling in front of a swastika, the symbol of the Nazis who killed six million Jews during the Holocaust. Not only is Omar vocal about her hatred for Israel, the homeland of the Jewish people, but she has been endorsed and supported by CAIR.

CAIR, the Council on American Islamic Relations, is listed as a designated terrorist organization by a federal judge, the U.S. Attorney Generals office, and the Fifth Circuit Court of appeals as having direct ties to Hamas.

Hamas has also been classified as a designated terrorist organization by the U.S. State Department and is listed as a co-conspirator in the Holy Land Foundation HAMAS terror funding trial in 2008, which is the largest terrorism financing case in U.S. history. In the Covenant of Hamas, which outlines the goals and motive of Hamas and its members, it states that one of its main goals in the destruction of Israel.

“Israel will exist and will continue to exist until Islam will obliterate it, just as it obliterated others before it.”

Despite the fact that CAIR has been directly linked to terror financing and is recognized as a terrorist organization in the majority Muslim United Arab Emirates, Omar has not denounced CAIR, and has instead chosen to work alongside the terrorist organization to push for more Islamic influence in American politics. On December 9, 2017, Omar spoke at CAIR San Francisco’s 23rd Annual Banquet.  During the banquet, Omar took time during her speech to bash America as a discriminatory, white supremacist country that didn’t make her feel welcome when she immigrated to the United States from Somalia, a third world Islamic terrorism hotbed.

It cannot go without question: If Omar is campaigning with a woman who proclaimed that a known Jihadi who tried to blow up the World Trade Center is her favorite person, is she fit to be elected to Congress? Even more concerning is the fact that Omar has not condemned her associations with Sarsour since it was revealed that she is connected to Wahhaj.

Since announcing his candidacy, Ellison, who claims to be an anti-discrimination advocate has not been transparent about his own support of individuals who spew hatred, bigotry, and anti-Semitism. Ellison, who claims to fight for the most vulnerable, is close friends with Linda Sarsour, as well as Louis Farrakhan, the leader of the Nation of Islam and proponent of anti-Jewish conspiracies.

One month before Linda Sarsour called for Jihad (Islamic terrorism) to be carried out against President Trump, Ellison tweeted, “Silencing Linda Sarsour is wrong”. However, he was completely silent on the issue of whether or not it was wrong for Sarsour to call for Islamic terror to be carried out in the United States in an effort to defeat President Trump in June of 2017.

Along with Wahhaj, Lucas Morten 38, Subhannah Wahhaj, 35, and Jany Leveille, 35, were also arrested in connection to the compound raid. They are currently being held at the Taos Adult Detention Center.

According to police, Wahhaj, whose family has deep ties to Islamic terrorism, was in possession of several firearms when police raided his compound that was equipped with a full shooting range.

Will the Mainstream media continue to give Jihadi’s a pass in the mainstream media out of a fear of being politically correct, or will they assert right for wrong and force the Democrat Party to condemn Sarsour and suspend their relationships with any and all Muslim candidates who continue to associate with Sarsour and Wahhaj?

The American people have no choice but to wait in anticipation as these enemies of the state continue to wage their war in their fight to Islamify America with the help of the complicit American media and Left-wing political apparatus.