No surprise here. The Left, and the Democrat Party, have been moving away from support of Israel for years. And for a Muslim to hate Israel is simply in accord with Qur’anic anti-Semitism. The Qur’an depicts the Jews as inveterately evil and bent on destroying the well-being of the Muslims. They are the strongest of all people in enmity toward the Muslims (5:82); they fabricate things and falsely ascribe them to Allah (2:79; 3:75, 3:181); they claim that Allah’s power is limited (5:64); they love to listen to lies (5:41); they disobey Allah and never observe his commands (5:13). They are disputing and quarreling (2:247); hiding the truth and misleading people (3:78); staging rebellion against the prophets and rejecting their guidance (2:55); being hypocritical (2:14, 2:44); giving preference to their own interests over the teachings of Muhammad (2:87); wishing evil for people and trying to mislead them (2:109); feeling pain when others are happy or fortunate (3:120); being arrogant about their being Allah’s beloved people (5:18); devouring people’s wealth by subterfuge (4:161); slandering the true religion and being cursed by Allah (4:46); killing the prophets (2:61); being merciless and heartless (2:74); never keeping their promises or fulfilling their words (2:100); being unrestrained in committing sins (5:79); being cowardly (59:13-14); being miserly (4:53); being transformed into apes and pigs for breaking the Sabbath (2:63-65; 5:59-60; 7:166); and more. They are under Allah’s curse (9:30), and Muslims should wage war against them and subjugate them under Islamic hegemony (9:29). 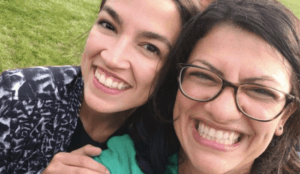 Tlaib, who is Palestinian-American, will become the country’s first female Muslim member of Congress next year. She is running unopposed in November.

On Thursday, as Hamas rockets rained down on Israeli civilians, Tlaib attacked Israel indirectly on Twitter:

Growing up in Detroit taught me better than to stand by as people’s rights are violated. My roots as a Palestinian American are strong and important. I believe every human being deserves to live with dignity. #HumanRightsforAll

Growing up in Detroit taught me better than to stand by as people’s rights are violated. My roots as a Palestinian American are strong and important. I believe every human being deserves to live with dignity. #HumanRightsforAll

…She has come under criticism for her previous anti-Israel statements. She criticizedSen. Kamala Harris (D-CA), for example, for meeting with Israeli Prime Minister Benjamin Netanyahu, whom Tlaib accused of “racism.” And, according to the Algemeiner, she supported Palestinian terrorist Rasmea Odeh in her bid to fight deportation for lying to U.S. immigration officials about her past.