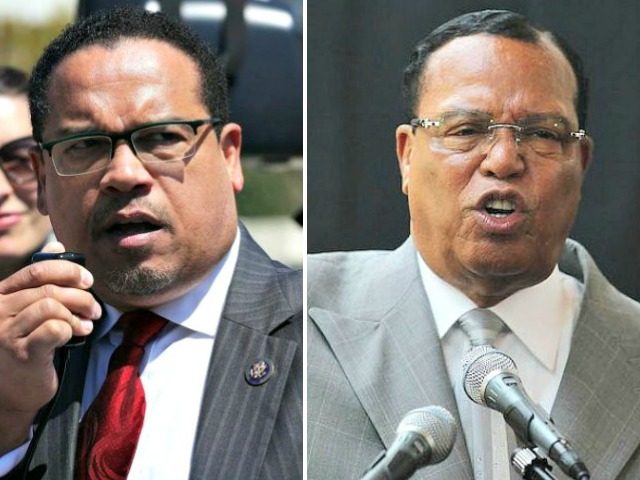 Media outlets began to call the Democratic Primary for Minnesota attorney general with just over 20 percent of the vote counted Tuesday night. Rep. Keith Ellison (D-MN) has won in a landslide.

Ellison looks to have secured a comfortable majority of Democratic primary votes in a five-candidate field in which he had by far the most prominent public profile.

Ellison, one of Congress’s most left-wing Democrats, was heavily favored to win the race for his party’s nomination for the top law enforcement office in the Land of the Sky-Blue Water. The sitting U.S. representative from Minneapolis sought the chair of the Democratic National Committee (DNC) last year, but settled for the deputy spot after former Secretary of Labor Tom Perez edged him out in the leadership election. He then opted to run for Minnesota AG rather than seek reelection to Congress.

“As the People’s Lawyer, I will be on the front lines to defend the rights and freedoms of all Minnesotans,” Ellison said in a statement after clinching the nomination.

Domestic abuse allegations against Ellison, which surfaced only days before primary-goers went to the polls, appear not to have had a significant effect on the primary after some speculation they might upend the race. Ellison has consistently denied that, during a 2016 breakup with his live-in partner Karen Monahan, he pulled her off of his bed, swearing at her as he commanded her to leave his home, which up until then they had shared.

The story surfaced Saturday when Monahan’s son, Austin Aslim Monahan, claimed on social media to have seen a video of the incident. Monahan herself claims that her son’s account, including that she had secretly videoed the altercation, was true, although she also claimed to have lost the thumb drive on which she’d kept the video in a subsequent move.

“This video does not exist because I never behaved in this way, and any characterization otherwise is false,” Ellison said in a statement.

Monahan, a activist with the left-wing Sierra Club, corroborated her son’s claims in a 3,000-word, eclectic-leftist manifesto delivered to the media in which she discusses being “a #METOO survivor” in the context of “intersectionality,” and how “Racism and Patriarchy are two oppressive systems the US was colonized on.”

Monahan’s claims go well beyond anything her son wrote, while offering no new specific allegations. Instead, she characterizes herself as a “survivor” with Post-Traumatic Stress Disorder (PTSD) from dating Ellison and diagnoses her ex with Narcissistic Personality Disorder (NPD), insisting she is qualified to do so despite lacking any psychiatric training. She writes:

After a several years of being in a relationship with Keith Ellison, It became clear,  I had survived narcissist abuse. Unless you have been through narcissist abuse, it is the most difficult form of abuse to articulate. It leaves survivors (if they survive) with serious health impacts, complex ptsd, depression and so many other devastating impacts. It is a slow insidious form of abuse. You don’t realize it is happening until it’s too late. Now that I understand it and have done so much healing, I can look back at certain moments and experiences in this relationship and they now make perfect sense. I or nobody else can diagnose a person with narcissistic personality disorder (NPD). But I am well aware of the traits and I witnessed each one of them.

Having secured the Democratic nomination, it remains to be seen if the developing dispute will cast a shadow over Ellison’s general election campaign in the same state where Sen. Al Franken (D-MN) was forced to resign as part of the #MeToo campaign.

Ellison is no stranger to controversy, having maintained open ties with left-wing radicalism throughout his career. He received the endorsement of Democratic Socialists of America (DSA), the U.S.’s largest openly socialist organization, in his race against Tom Perez, and has returned the favor with expressions of admiration for the group’s work.

Ellison was the first Muslim congressman ever elected in the United States. His journey to Islam began with Louis Farrakhan’s anti-white, anti-Semitic cult the Nation of Islam, the central beliefs of which include that white people were “grafted” into existence as a result of the evil experiments of a black mad scientist named “Yakub.” Ellison was closely associated with the Nation of Islam and other strains of black nationalism well into the 1990s. As Farrakhan, whom Ellison denounced when he ran for Congress in 2006, revealed publicly earlier this year, Ellison sold the Nation’s notoriously anti-Semitic newspaper, The Final Call, on the streets of Minneapolis, at least as late as 1995. He appears to have maintained some connection with the Nation even after his 2002 election to the Minnesota statehouse.

In giving his account, which contradicted Ellison’s earlier claims of minimal involvement in the Nation’s activities, Farrakhan gave an explanation characteristic of his typical rhetoric, telling his parishioners, “So when the Jews found out that he was in the Nation—’Alright, Mr. Ellison, come on now you have got to denounce Mr. Farrakhan as an anti-Semite, and maybe we will let you run.’”

In his final year in law school, in 1990, Ellison was even more openly radical, openly calling for a black ethnostate to be carved out of the American South and calling the U.S. Constitution the “best evidence of a white racist conspiracy to subjugate other peoples,” in a series of columns under his then-sobriquet “Keith E. Hakim.” While he has distanced himself from such explicit radicalism more recently, Ellison continues to endorse the violent anarchists and communists of Antifa in their campaigns.

On the opposite side of the aisle, trade attorney and former state Rep. Doug Wardlow, from suburban Eagan, Minnesota, appeared poised to secure the Republican nomination for Minnesota AG. “Minnesota Democrats are going to regret this choice,” Republican Attorneys General Association Executive Director Scott Will said in a statement.

Ellison and Wardlow will face each other in the November 8 general election.