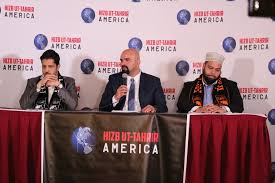 “My dear brothers and sisters, this idea of fitting in – we need to eliminate this from our vocabulary. Again, we are to stand out. We are a unique nation with a unique set of solutions. We are not to fit in. How dare the truth and the falsehood hold hands? How dare we think that fitting in is the sole purpose of this message?”

Will US authorities heed this and ponder its implications? Of course not.

Haitham Ibn Thbait, a member of Hizb-ut-Tahrir America, said that Islam stands in “total contradiction to what the West represents” – liberalism, democracy, feminism, and movements such as DREAM, #metoo, Black Lives Matter, LGBTQ, Pro-Choice, and Occupy Wall Street. Speaking at Hizb-ut-Tahrir America’s annual Khilafa Conference, Ibn Thbait said that “we should be working within our own system, not democracy” and warned that “our children might prefer democracy to Islam.” “Can you imagine the Prophet of Allah standing alongside the LGBTQ community? Or with Pro-Choice? Or with… the Occupy movements?” he said. The conference was held in Palos Hills, Illinois on April 29. Ibn Thbait expressed similar sentiments at the Khilafa Conference held in 2016 in Chicago (see MEMRI TV clip 5493).

The following are excerpts from the speech:

Many of our community members are recruited so that they can translate, so that they can corrupt our creed, and so that they can consult the infidels in how to derail the Muslims and set them on a course pleasing to the West. Policymakers work long and hard to ensure that we Muslims believe that you can succeed under their ways and with their values. And that is why we see them promoting these so-called “ hip” Muslims who clearly violate the laws of Allah. We see a veiled Muslim woman on the cover of a sex magazine. We see Muslims in their armies. We see Muslims in political office. This is their way of saying to us, “You don’t need your straight path. We have all you need.” As early as 2004, RAND stated that they needed to get behind the modernists. They need to provide them with the platform to disseminate their ideas, and this is exactly what we are seeing today – the promotion of the secular Muslim. Whether knowing or otherwise, Muslims in the West are soldiers against Islam.

We need to differentiate ourselves. We cannot accept an identity that has clearly destroyed humanity. Look around you. They are failures, and we know this. And we need to take an intimate look at what is happening in the West so we can better articulate what is happening to our Muslims. We need to understand that Islam is the solution to all the ills that have destroyed them. And if we seek to fit in, then we are part and parcel of the problem that is infecting the world at large. My dear brothers and sisters, this inferiority does not belong to us. It is not befitting of a nation who Allah has labeled the best nation. “You are the best nation that has come out of the people.” How dare you be inferior while at the same time Allah has given you the attribute of being the best nation….

My dear brothers and sisters, this idea of fitting in – we need to eliminate this from our vocabulary. Again, we are to stand out. We are a unique nation with a unique set of solutions. We are not to fit in. How dare the truth and the falsehood hold hands? How dare we think that fitting in is the sole purpose of this message? A Muslim may not choose which aspect of Islam to adhere to or to abandon. We have no choice in the matter. We find our Muslim brothers and sisters jumping on every bandwagon – DREAM, #MeToo, Black Lives Matter – every single bandwagon we can think of, attempting to solve these problems from within the confines of the same system that produces these problems, when we have our own set of solutions.

If there is one thing and one thing alone that we can arm our children with, it’s to believe that they are part of the best nation, to eradicate the sense of inferiority that is so deeply entrenched in many of our kids. My dear brothers and sisters…

But can you imagine the Prophet of Allah standing alongside the LGBTQ community? Or with Pro-Choice? Or with the movements, the Occupy movements? Imagine the Prophet and his companions acting as if they are devoid of solutions, carrying ad hoc politics and contradictory messages. This is not who we are. Think about these actions that we see by our community leaders and measure them in accordance with the actions of the Prophet of Allah and his companions. And then the picture will be clear.

And when we look at our leaders in our community, they have engaged in the secular process. They have clearly sided with haram laws. Many of them have promoted policies that undermine Islam. They have sided with agendas such as countering extremism and the war on terror, or even recognizing the Zionist occupation.

These kids just wanted to feel some confidence, some trust, some pride in who they were. These same kids had they not had that opportunity may grow up one day and when asked, “What is your favorite system?” they will say democracy instead of Islam, because their inferiority started at a very early stage in their life.

Man in crowd, followed by crowd and Haitham Ibn Thbait: There is no God but Allah, and Muhammad is His Messenger!

There is no God but Allah, the Caliphate is His Unity!

Haitham Ibn Thbait: Islam was not sent to spread liberal values. Muhammad was not a secularist, not a feminist, not a pro-gay activist, and not a philosopher. He is the final messenger and the seal of prophets, and a mercy to mankind….