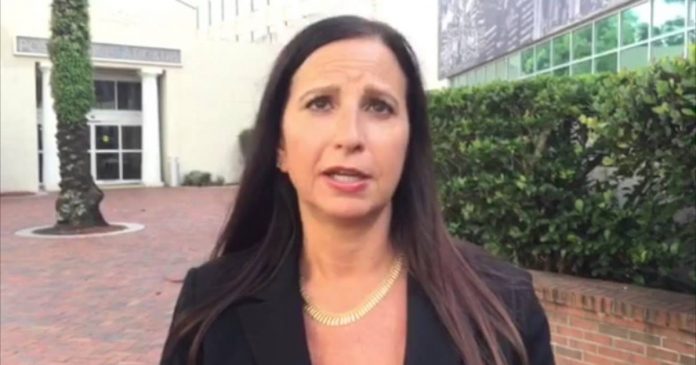 A Republican candidate for State’s Attorney in Fort Myers, Florida has family ties to the Palestinian Liberation Organization (PLO), a known terrorist group that is responsible for the slaughter of thousands of Israelis.

Candidate Amira Fox, whose full name is Amira Dajani Fox and who often goes by “Amy” on the campaign trail, had an uncle who was was an Executive Committee member of the PLO.

In her father’s autobiography, a 10 year old book titled “From Palestine to America,” Taher Dajani, born in Jaffa, Israel vents his frustrations about the “Jewish Lobby” and the “Christian Right,” but most intriguingly discusses his brother Sidqi, who lived in Cairo, Egypt.

The book makes reference to Sidqi’s “political and scholarly activities:”

The book “Armed Struggle and the Search for State: The Palestinian National Movement” by Yezid Sayigh details some of Sidqi’s activities as an Executive Committee member of the PLO, including representing the PLO on an official basis in Cairo.

Sidqi even met with the Vice Foreign Minister of Egypt and later Secretary General of the United Nations, Boutros Boutros-Ghali.

The bibliography of the book says he was interviewed in Cairo in 1992.

Sidqi was quoted in a 1998 Washington Post op-ed as calling Israel “the Zionist-racist entity.”

Sidqi was not an average Palestinian terrorist, but instead, he was a powerful leading member of the terrorist organization, which explains why his niece Amira, or “Amy” as she likes to call herself has not been forthcoming about her relationship with her father or her family’s documented historical involvement with a terrorist organization.

“Amira Dajani, who refuses to tell voters if she subscribes to her father and Uncle’s anti-Semitic activities, also refuses to say whether or not she supports the implementation of Sharia Law in the US,” wrote Jacob Engels in the Central Florida Post.

Upon further investigation, Big League Politics discovered that Amira’s father Taher Dajani, 84, is currently living in Fort Myers, where she is running for office. Her opponent, Republican Chris Crowley was recently charged with campaign finance allegations after accepting $600 at a campaign raffle, which he thought was legal.

Crowley claimed that the arrest was politically charged, as he was arrested after exposing Dajani’s radical Islamic ties. Dajani is the top aide to outgoing State’s Attorney, who levied the charges against Crowley after claiming that he received an anonymous tip about the campaign event.

“I’m very concerned about my opponent,” Crowley said in June. “Having a radical anti-Semitic, anti-Israel book dedicated to her. What I’m asking the members of the press to do today, and I’ve asked these questions myself, but they haven’t been answered: Does Ms. Fox agree with this book? If she agrees with what’s in his book, she needs to say so.”

“Fox,” otherwise known as Dajani, has not issued a statement to distance herself form her father’s anti-Jewish book which is dedicated to her.

There are no Democrats running for the position of state attorney in Fort Myers, which means that the winner of the Republican primary will become state attorney after Florida voters head to to the polls for the Florida primary on August 28.

Interestingly, Amira Dajani is not the only candidate campaigning in America who has ties to Palestinian terrorists.

In California, Ammar Campa-Najjar is running on the Democrat ticket in the 50th District, an inland district west of San Diego. Campa-Najjar won the state party convention’s endorsement, but his own family ties to terrorism is hindering his campaign. He is the grandson ofMuhammad Yusuf al-Najjar, one of the masterminds of the Munich Massacre in which Palestinian terrorists who belonged to the group “Black September” held 11 Israeli Olympic athletes and coaches at the 1972 Games in Germany. Al-Najjar was later assassinated in 1973 by Israeli commandos.

Campa-Najjar himself spent part of his childhood in Gaza.

Angered by the questions, Tlaib was also caught on camera assaulting the Jewish journalist who asked her to condemn Hamas. A police report was filed, and assault charges have been pressed against Tlaib for what many are now calling a hate crime, due to the fact that Tlaib herself has made several anti-Jewish comments.

After winning the primary in Michigan, Tlaib, who has seemingly forgot that she is campaigning in America, cloaked herself in a Palestinian flag and declared her win a victory for Palestinians.

On Friday, J Street, a left wing Jewish lobby, announced that it was withdrawing its endorsement of Tlaib after she declared that Israel does not have a right to exist. After winning her primary, Tlaib said that she does not support Israel’s right to exist, and called for a one state solution that only includes “Palestine.”

“After closely consulting with Rashida Tlaib’s campaign to clarify her most current views on various aspects of the Israeli-Palestinian conflict, we have come to the unfortunate conclusion that a significant divergence in perspectives requires JStreetPAC to withdraw our endorsement of her candidacy,” the group’s statement read. “J Street will not endorse candidates who don’t endorse the two-state solution.”

Read more about other Islamic terror tied candidates running for office throughout the United States in 2018 here: