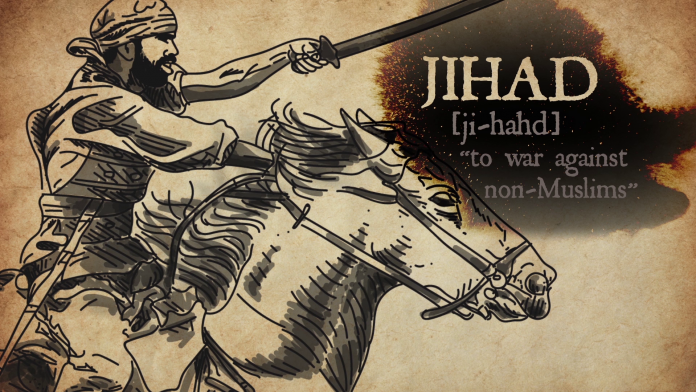 From the Quranic Concept of War. A landmark jihadi book written 40 years ago in Pakistan and still widely regarded as important by Jihadi leaders to this day:

“Let us now make an attempt to study the Quranic concept of strategy. The first step to this study is to understand the difference between total strategy, that is Jehad(sic), and military strategy. The term Jehad, so often confused with military strategy, is, in fact, the near-equivalent of total or grand strategy or policy-in-execution. Jehad entails the comprehensive direction and application of “power” while military strategy deals only with the preparation for and application of “force”. Jehad is a continuous and never-ending struggle waged on all fronts including political, economic, social, psychological, domestic, moral and spiritual to attain the object of policy. It aims at attaining the overall mission assigned to the Islamic State, and military strategy is one of the means available to it to do so. It is waged at individual as well as collective level; and at internal as well as external front.”

Note that Jihad is an all-encompassing concept of conflict. It includes all facets of society and culture. This reflects the fact that Islamic doctrine recognizes that Islam is not a religion in the same sense as other forms of religion. Islam, according to its own doctrine, is a complete civilization, a complete way of life, that covers religious, personal, social, cultural, legal, military and political aspects.

This is one reason why shariah is completely different from all other forms of religious law on earth. Shariah covers all aspects of life. It is NOT just a set of rules for pious Muslims to follow in their religious life or when worshipping.

Moreover, shariah is the only form of religious law on earth that specifically is meant to apply to people of OTHER faiths. Canon law applies to Christians. Rabbinical law applies to Jews. Shariah applies to Muslims and non-Muslims alike. [emphasis added]