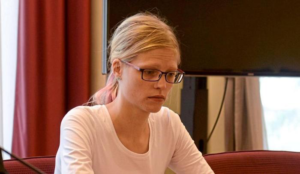 Doubtless Pope Francis, who has insisted that authentic Islam and the proper understanding of the Qur’an reject every form of violence, is on his way to Hannover now to explain to young Abdullah how he is misunderstanding his peaceful religion.

Half a year after the terrible knife attack, Vivien K. (24) encountered the teenager who almost killed her over nothing! Her grandparents, her friend Domenic (25) and her lawyer Dimitrios Kotios accompanied the saleswoman to the district court. Vivien was tense and nervous, but determined: “I want to look him in the eye.”

The public was excluded from the trial of the underage stabber Abdullah A. (17) yesterday in Hannover. The Syrian is accused of attempted manslaughter. At the end of March, he stabbed the 24-year-old. The 10-centimeter blade broke her ribs, and injured her liver, stomach, kidney, and intestines. Vivien lay in a coma; her spleen and parts of her pancreas were removed.

The trigger of the attack was a quarrel with the brother (14) and cousin of the defendant in a supermarket. The 17-year-old joined in. The trio first attacked Dominic on the street. When Vivien intervened, she was stabbed. Abdullah A., who calls himself a “model refugee,” according to BILD information, adheres to the written statement his lawyer made before the trial.

Excerpt: “The accused knows from his culture that conflicts are resolved with the knife. He describes the regional customs as follows: If one is insulted, one may stab. In severe cases, one may kill the person.” And “he states that his behavior was not wrong according to the rules of his religion, and does not understand why he must be detained.”