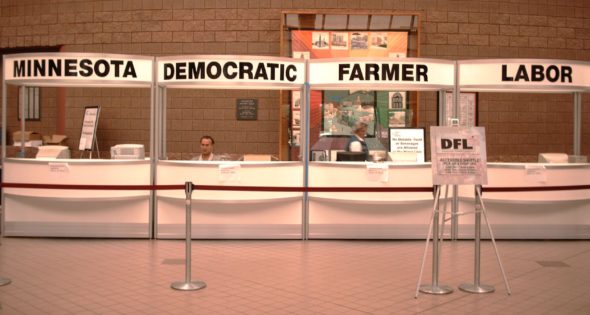 As tens of thousands of Sharia-supremacists convene in Minneapolis/St. Paul’s Minnesota Vickings’ stadium for a two-day “show of power,” the context for such a demonstration – and its implications – is urgently needed.  Fortunately, a new Center for Security Policy Occasional Paper by author and filmmaker Trevor Loudon explains how Muslims intent on fundamentally transforming America have achieved an ominous beachhead in Minnesota, thanks in large measure to that state’s long-dominant radical left.

Mr. Loudon’s “Red Minnesota: How a State’s Communist Roots Produced the Hard-Left Politics that is Enabling Its Burgeoning Sharia-supremacism” reveals a chilling reality: The “Land of Lakes” has become one of the most Islamized states in the Union because it is one of its most socialist states. A man who personifies this “Red-Green axis” is the Marxist and Muslim Brotherhood-tied Keith Ellison, the first Muslim elected to Congress in 2006 who has just won the Democratic nomination for the state’s Attorney General. His candidacy has become a crucible for the further coalescing of the far-left and Sharia-supremacist movements into one great stream dedicated to undermining and eventually supplanting the traditions of political freedom, Western values and religious tolerance.

As Trevor Loudon meticulously details, the roots of the problem lay in the waves of leftist Northern European, and especially Finnish, refugees from Czarist Russia to the region around the turn of the 20th Century. The Socialist Party of Minnesota was formed in 1899.  It was succeeded in prominence by the Minnesota Democratic-Farmer-Labor Party (D-F-L) in the New Deal era. The D-F-L persists to this day as Minnesota’s Democratic-affiliated but independent, “progressive” party at the state level, one of only two states with such an arrangement.

Trevor Loudon’s characteristically insightful and well-documented deep-dive into the left-wing radicalism of Minnesota politics is as impressive as it is instructive. “Red Minnesota” makes clear that Sharia-supremacism finds particularly fertile ground in polities whose character has already been undermined by leftist cultural-relativist forces.

Minnesota is facing myriad, significant challenges. Among them is the increasing muscle-flexing of its Sharia-supremacist population.  This important and timely study can serve both as a roadmap for a long-overdue course-correction in that state and as an object lesson for other states who want to avoid finding themselves in the same, dire predicament.

“Red Minnesota” is excerpted from a forthcoming Center for Security Policy monograph that will explore other aspects of Minnesota’s transformation at the hands of its Red-Green Axis.

“Red Minnesota” is available as a free PDF below: