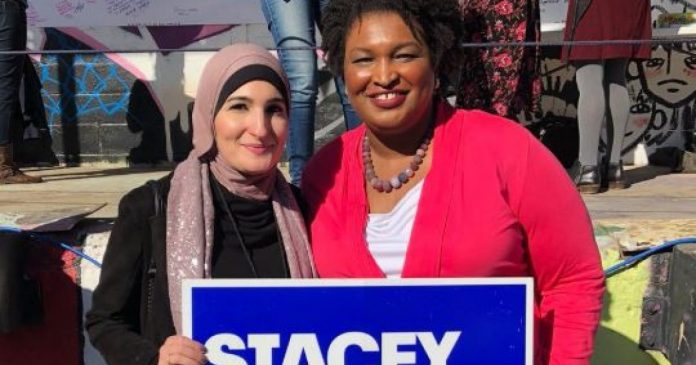 Anti-Semite Linda Sarsour fully endorsed candidate Stacey Abrams in Atlanta, Georgia telling the crowd, “You know what I said when I first saw her? I said ‘Afternoon, Governor Abrams.’

Video has emerged from the rally from Georgia Gun Owners, a pro-gun organization who strongly opposes Abrams due to her anti-gun positions.

“Stacey Abrams met Linda Sarsour in Sarsour’s capacity as a leader of the Women’s March anniversary in Georgia, which leader Abrams attended,” said Abrams spokeswoman Priyanka Mantha. “To my knowledge, this is the one time they have met. Abrams and Sarsour disagree on many issues but share the commitment to advance women’s rights.” Stacey Abrams is running for governor in Georgia, and if she were to win she would be the first black woman to ever be elected governor of any state in American history. Unfortunately for her, she has some major barriers standing in her way.

Between 2007 and 2017, Abrams served as state legislator and that part-time position paid a salary of $17,342 each year with $173 being granted to her for mileage and lodging when the legislature is in session.

Back in May, Sarsour tweeted about Abrams, “The engine behind the Stacey Abrams campaign and primary win are Black women.”

Proud to stand with activist, organizer and @womensmarch national co-chair @lsarsour during #WomensMarch2018. When women speak up, stand up and show up for progress, incredible things happen. Let’s get to work. #PowerToThePolls #PowerToThePollsGA #TeamAbrams #gapol pic.twitter.com/CCW81wUXmy