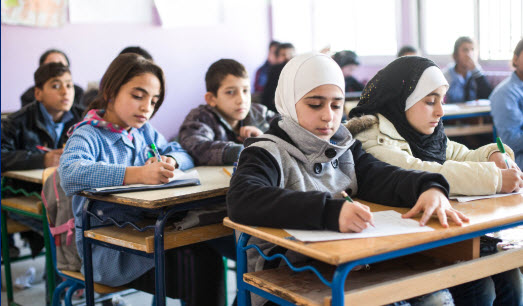 In 1993, Ibrahim Hooper, director of strategic communications for the Council on American-Islamic Relations (CAIR), said that, “I wouldn’t want to create the impression that I wouldn’t like the government of the United States to be Islamic sometime in the future. But I’m not going to do anything violent to promote that. I’m going to do it through education.” Twenty-five years later, CAIR could be making headway on that goal, through its relationships with US public school districts in at least three states.

CAIR — an Islamist group and United Arab Emirates-designated terrorist organization that bills itself as a defender of civil rights — has achieved special concessions for Muslim students and launched the inappropriate insertion of religion into publicly-funded education. Meanwhile, pushback from parents and outside organizations is building.

Seattle Public Schools’ partnership with CAIR’s Washington chapter is the latest incident to cause controversy, but the relationship dates back to at least 2011, when CAIR-WA sent the district a letter proposing accommodations for Muslim students and classroom lessons on Islam. Then as now, CAIR-WA claimed to be fighting “anti-Muslim bullying.” To that end, in 2012 and 2013 the organization contacted the school district to complain about “Islamophobia” among teachers.

That approach eventually paid off. In a Ramadan crowd-funding campaign in May of this year, the CAIR-WA chapter outlined its plan “to provide educational training for teachers and staff on things like Ramadan, Eid, and how educators can support Muslim students in the classroom.” Accordingly, that same month, CAIR-WA ran a “professional development session” in a Seattle high school that “addressed providing identity-safe spaces in schools for Muslim families” and “how to support students during Ramadan.”

In July, the Freedom of Conscience Defense Fund (FCDF), a legal advocacy group, sent a letter to the Seattle school district warning that partnering with CAIR and “discriminating in favor of students based on their religion” was a violation of the First Amendment that, if continued, would lead to legal action. (This was no empty threat: CAIR’s National Executive Director, Nihad Awad, admitted in 2016 that distributing the group’s publications to schools is “both a religious and educational exercise.”) FCDF then filed a public records request asking for emails between school officials and CAIR staff.

In a similar situation, the FCDF sued the San Diego Unified School District in 2017 on behalf of several local parents, alleging that its relationship with CAIR set up a “subtle, discriminatory scheme that establishes Muslim students as the privileged religious group.”

On the advice of its lawyers, the San Diego school board voted in 2017 to sever its ties with CAIR, but the FCDF filed an injunction in February alleging that the relationship was ongoing and calling for the release of all related correspondence. (Meanwhile, another California school district, Cajon Valley Union, is currently under pressure from CAIR to adopt its anti-bullying programs.)

Although no formal agreement yet exists, CAIR is following this same pattern with school districts in Minnesota, particularly Minneapolis, due to its large Somali refugee population. The organization’s local chapter, CAIR-MN, filed a complaint in 2010 with the US Department of Education alleging harassment of Muslim students, although it had begun conducting independent “mediation sessions and diversity trainings for district staff” the previous year.

In 2013, a member of the Columbia Heights School Board resigned at CAIR-MN’s urging, due to a Facebook comment (that he claimed was not his own) rejecting the idea of installing foot-washing stations and bidets in high school bathrooms to accommodate Muslim students.

CAIR-MN continued its efforts in 2016, complaining that various school officials were not responding quickly enough to alleged hate crimes against Muslim students, while calling for increased protection for such students statewide.

Earlier this month, CAIR-MN offered an in-house training session for educators, “Positive Interactions Training for Teachers,” that included a talk on “Understanding Islamophobia and Bullying.” Meanwhile, the Minnesota Department of Education website recommends — alone among religious organizations — CAIR-MN and its publication, “An Educator’s Guide to Understanding Islamic Religious Practices,” under “community resources” to “address bullying.”

Spotting a now familiar pattern, the FCDF sent a data records request to the Minneapolis public school district on August 17, calling for emails that show whether collaboration exists between the district and CAIR-MN. Minnesota would do well to learn from the mistakes of Washington and California, and avoid another ill-advised partnership with CAIR.

Given CAIR’s Islamist heritage, mission, and actions, no public school district should fall for its duplicitous claims of fighting bullying and “Islamophobia.” Its classroom activities endanger America’s future by opening students to indoctrination into a virulently anti-American, anti-Western, and antisemitic ideology.