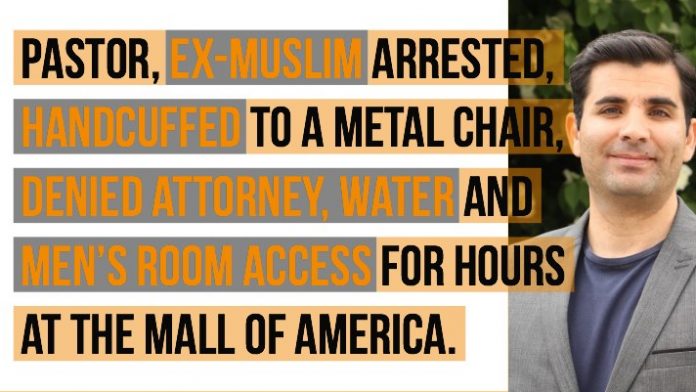 On July 31st of this year an Aeromexico jetliner took off in the midst of a storm in Northern Mexico. On board were 103 passengers. One of them, Iranian born, ex-Muslim now Christian pastor Ramin Parsa (age 32) was filming the take off when suddenly he realized the plane was going down. He cried out to Jesus for a miracle and a miracle was granted: all 103 passengers on board survived the plane crash! The aircraft – destroyed! Kare 11, the Minnesota affiliate of NBC, also covered the incident.

How many stories like these have you heard? We can bet not many, if any at all.

But the story you are about to hear now is just as incredible and outrageous, even though highlighted in a much different light, and sadly, in a very different way.

LISTEN TO THE STORY

ThirdRailTalk.com interviewed California based Pastor Ramin Parsa on August 27th and discovered that while visiting Minnesota last week for his three day visit, and congregation presentation earlier on Saturday, Pastor Parsa was invited by his host to visit the Mall of America, for an enjoyable stroll and coffee, and for his first time in one of Minnesota’s most renowned iconic attractions.

At the Mall: Interest In His Story, Friendly Conversation

While at the Mall, Pastor Parsa struck up a mutually enjoyable conversation with a couple of young Somali women, who appeared to be delighted to visit with he and his local pastor friend.

Hearing his Iranian accent, that they were intrigued. They asked him where he was from, and hearing that he was born and raised in Iran, and into the Muslim community there, they inquired as to whether he was a practicing Muslim. He replied, no, and indicated that he had converted to Christianity years ago and paid a dear price (torture, interrogations, and ministry harassment) for his commitment to the Christian church, and the teachings of Jesus Christ …All due to his Christian conversion, he further replied to the interested women.

One Somali woman however, who was initially listening to the exchange from a distance, approached the group conversation, objected loudly, and chastised Pastor Parsa, the other pastor, as well as the Somali women, and demanded of the women, that they “not listen to this man”, and directed Pastor Parsa harshly to leave the Somali women alone. Pastor simply suggested to the clearly distraught Somali woman, that the two women were simply asking questions respectfully, and asking for some answers from him, which he was pleased to provide.

The obviously angry Somali woman who was nearby still, overheard more of the conversation and left the area to falsely report this gathering and discussion to the nearby Mall of America Security officer, as a threat, and as “harassment”. The two Somali women engaged in the conversation with Pastor Parsa and his Minnesota host, actually spoke up in defense of Pastor Parsa, and indicated clearly to the Mall officer, that “they were just talking”.

The MOA “security officer” ignored the plea of the two Somali women, in defense of the pastors, and then told the pastors that they were “not permitted to discuss religion in the Mall”, and demanded that they stop, or they would be escorted out of the Mall immediately, or they “would be arrested for soliciting and Illegal trespass”, for ignoring HIS order to cease.

The three visitors to the Mall said their goodbye’s, thanked the ladies for the time spent, and left for a nearby coffee shop, where they ordered their beverages.

“Security” demanded that Pastor Parsa leave the MOA “immediately” or be arrested. He responded by asking a respectful question as to “Why now”? “What have I done now”?

Handcuffed, Arrested, Denied Water And Call to an Attorney – For Hours

The “security officers”, clearly picking a fight with this visitor to Minnesota, handcuffed Pastor Parsa behind his back, and hauled him of to, what I can only describe as “MOA Jail”.He was literally, delivered to an interrogation room in the sub-basement of the MOA—handcuffed to a steel chair—which was bolted to the floor—for the next two-plus hours of his life, and detained him for hours while he was harassed.

He was denied the water he requested until the end of the ordeal, when Bloomington MN PD was expected to arrive—denied his requested restroom break until the end, and Bloomington MN PD was expected to arrive—being badgered by officers, attempting to barter “water for a demanded photograph of him”, (which he refused)—denied a phone call—denied a requested attorney—denied a request for his “Miranda rights” to be read to him (This also happened when he requested his rights to be read to him by the Bloomington PD as well later)—continually denied him the right to know, per his repeated request, to know what he had actually done to violate any “law” or written MOA security policy, and for hours before they actually called the Bloomington MN Police Department personnel, for them to in turn, take him into custody again, for “booking and processing”.

At some point a Bloomington Police Officer came to the Mall and took pastor Parsa, handcuffed him once again from behind, and placed Pastor Parsa into his BPD police cruiser. He was then taken to the Bloomington Police Department, booked, given a citation—to appear “personally” back in front of a Hennepin County Judge Minnesota—sometime into the future, and released on a $78 bail. According to pastor Parsa, the BPD officer never inquired as to what was the reason for the arrest in the first place (a copy of the complete report will be requested shortly).

The Mall of America has banned pastor Parsa for 6 months from its premises, including the hotels, and he is now awaiting a court date, and again, to appear personally in front of a Minnesota Court soon.

This also would suggest, that Pastor Parsa is due to return back to Minnesota, from his California Home (and Church), at his own time and expense, in order to have appear before a Minnesota Judge.

Pastor Ramin’s story is an amazing story of survival, courage and faith. He was born and raised in Iran. Which is to say, he was born into slavery, and forced servitude to a 1,400 year-old culture.

His family suffered greatly from the Iranian Islamic Revolution. One of his brothers was killed and most of their family’s possessions were taken.

Ramin first heard the message of Christianity through satellite TV and became a convert while still in Iran, and later on escaped. He is now pastoring a church in California, has his own YouTube Channel and has published a book telling his story in detail.

You can get in touch with pastor Ramin through his website at https://www.raminparsa.org/

Upon hearing this story we were shell-shocked, embarrassed for our State of Minnesota and its good people here, and horrified!

Having verified every detail of this story—possible to verify without ALL MOA surveillance tapes (to be requested shortly—and per legal action) we went to the Mall of America immediately to film a segment about the detention of pastor Parsa.

Our crew arrived at different times and we were likewise, threatened with arrest SEPARATELY in two different areas of the MOA, for—

Item number 2, in particular, should come as a big surprise to every patron, shopper, and out-of-town visitor especially, to the Mall of America; armed with a cell phone—and cameras, and routinely taking photographs, and creating videos—and still pictures constantly throughout the entire Mall, and amusement park area, each and every day of the week—seven days per week—and each of the 365 days per year, when the Mall is open for business. ..I guess the rules—ALL OF THEIR RULES, only apply to a “special group of people”, and not everyone these days in Minnesota.

When 1,000 Somali’s, entered the MOA, unexpectedly—and unannounced in advance—and “Rampaged throughout the MOA” one fine September day, in 2016, and running and screaming throughout to corridors of the Mall; and scaring the hell out of all Mall patrons, the shop managers, restaurant personnel, and forcing terrorized patrons to run and hide in the shops, as “security gates” were slammed shut for protection—that was OK with MOA “security”.. Bloomington, MN PD and MOA “security” were completely surprised and caugtht off guard. ..“10 were arrested for fighting and refusing to cooperate with police”—but that was OK?

No one was issued a “criminal trespassing citation”, as is true of Pastor Parsa! No one! Do you see where we are going with this, good citizens?

Pastor Ramin’s story is an amazing story of survival, courage and faith. He was born and raised in Iran. Which is to say, he was born into slavery, and forced servitude to a 1,400 year-old culture, which can get along (COEXST) with no other.

As is true in far too many countries around the world today, all connected to this exclusive club, and protected “class” of ungrateful immigrants colonizing our country—and OUR State of Minnesota most particularly today, and clinging to this astounding “political ideology”, masquerading as a religion, and using OUR US Constitution and OUR Bill of Rights for cover, whilst engaging in unrelenting mischief—some remarkably dangerous and life threatening for the rest of humanity, a good man such as Pastor Ramin Parsa, cannot live life as a free man; but only as a persecuted “kafir”..

His family suffered greatly from the Iranian Islamic Revolution. One of his brothers was killed and most of their family’s possessions were taken.

Ramin first heard the message of Christianity through satellite TV and became a convert while still in Iran, and later on escaped. He is now pastoring a church in California, has his own YouTube Channel and has published a book telling his story in detail.

You can get in touch with pastor Ramin through his website at https://www.raminparsa.org/

Minnesota owes this good man a blanket apology. Minnesotans can not be allowed to accept the maltreatment of such a good and decent individual, or to begin to allow this selective treatment of an individual to reflect the same totalitarian behavior pattern, or terrorist ridden nation he left in search of “FREEDOM” to grow and to metastasize here.

In the words of Martin Luther, albeit for different reasons of course, once said—

“I cannot and I will not recant anything, for to go against conscience is neither right nor safe. Here I stand, I cannot do otherwise—

I hope all of you can do as well.

Bob Carrillo, Co-Producer, and Host of Third Rail Talk  Bob has hosted his own radio and TV shows in the Twin Cities for years and has served as a member of the Commissioners Advisory Committee at the Minnesota Department of Human Services from 1993-2000. He also served on various Minnesota state-wide task force committees attached to the Minnesota Department of Human Services from 1993-2000. From 1998-2002, he was a member of the Minnesota Supreme Court’s Parental Cooperation Task Force. Connect with Bob here.

VIDEO: Pastor, Ex-Muslim Arrested, Handcuffed to a Metal Chair, Denied Attorney, Water and Men’s Room Access for Hours at the Mall of America. [Part 1] by ThirdRailTalk.com is licensed under a Creative Commons Attribution-NonCommercial-NoDerivatives 4.0 International License.