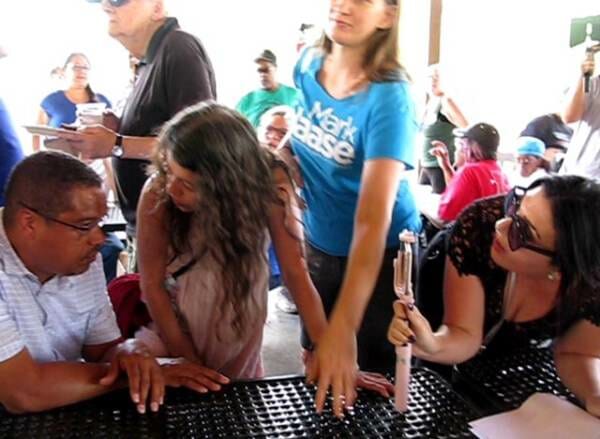 As he arrived for a campaign even in Minnesota on Saturday, Rep. Keith Ellison (D-MN) was confronted by investigative journalist Laura Loomer about the numerous domestic violence allegations that have been brought against him by two different women.
Loomer questioned Ellison about a 2005 police report filed by Amy Alexander, a Democrat activist who he had a relationship with. With the police report in hand, Loomer asked Ellison to explain why the police report says there was a domestic violence call to Alexander’s house, despite the fact that Ellison has denied the allegations.
Shocked that a woman showed up to his event to confront him, Ellison did not answer any of Loomer’s questions and instead ran away to his car with his new girlfriend and quickly drove away, leaving his event before he could speak.
Keith Ellison is currently the Deputy Chair of the Democrat National Committee and is running to be the Attorney General of Minnesota,even though he allegedly doesn’t have an active attorney’s license to practice law in the state of Minnesota. Despite the fact that the Democrat party has been at the forefront of the #MeToo movement, which was intended to empower women to hold their abusers accountable, the Democrat Party and Chairman of the DNC, Tom Perez have been unmoved by the numerous domestic violence allegations that have been brought against Ellison.
On August 11, 2018, a woman by the name of Karen Monahan accused Ellison of being physically and verbally abusive towards her. The allegations were posted on Twitter by Monahan, and were also posted on Facebook by her son Austin Monahan, in a post that has now gone viral. Monahan took to Twitter in a series of tweets to support her son’s post about the assault. Keith Ellison refused to address the police report when confronted by Loomer. However, he managed to cry with his hands in his face and run away in shame with his new girlfriend, Monica Hurtado by his side.
This abuse case was first reported by Michael Brodkorb and Jeff Kolb.

The caller’s name on the police report Loomer confronted Ellison with has been redacted, but according to a records search under the name of “Amy Alexander”, Alexander lived at 14** Washington St **, Minneapolis, Minnesota, which is the address on the reports, which documents the reported assault as taking place on May 16, 2005 at 21:17:25, which would be 9:17:25 pm.
Underneath the location noted on the report, the report says,

Keith Ellison is currently 55 years old. The age of the Keith Ellison noted in the police report from 2005 says the accused was a 41-year-old black male, another fact that supports Alexander’s claim.
In 2006, Alexander wrote an article called “Coming Out Of The Dark: Breaking The Silence About The Anointed Candidate. The article was published by the Wright County Republican.
https://twitter.com/KarenMonahan01/status/1029100412106887169
For nearly 12 years, domestic violence accusations against Keith Ellison have been available to the public, but the mainstream media and the Democrat Party, which claims to be the party of women’s equality, have both ignored the accusations.
https://twitter.com/keithellison/status/938832901948542976
Will Keith Ellison take his own advice he gave to former Minnesota Senator Al Franken and “do the right thing” and step down for his abuse of women?
https://twitter.com/keithellison/status/938509306047188992
Times Up Keith.
READ MORE ABOUT KEITH ELLISON HERE.
Share Our Work