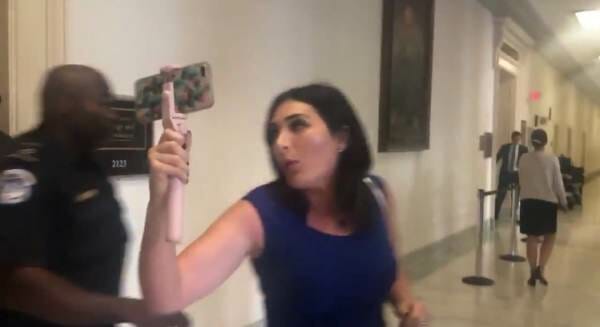 “We have a journalistic responsibility to hold them accountable,” Loomer said in the hallway after being escorted out by Capitol Police.

“Dorsey is a liar!” Loomer continued.

Jack Dorsey testified to the House Committee on Energy and Commerce Wednesday, “I want to start by making something very clear: We don’t consider political viewpoints, perspectives or party affiliation in any of our policies or enforcement decisions. Period.”

Twitter was actually caught censoring GOP lawmakers by blocking their names from the autocomplete searches.

Dorsey said this was an error that was fixed–strange coincidence that all of these “errors” always impact conservatives.

VIDEOS provided by TGP’s Cassandra Fairbanks who is on scene reporting live:

Wow @LauraLoomer just removed from Dorsey hearing, not sure what happened! Was in the hall pic.twitter.com/PSV6wej9JS