Around 7,000 Palestinians rallied near the Gaza border Friday afternoon in weekly protests at the Israeli frontier.

The Israeli military said demonstrators hurled rocks and Molotov cocktails at soldiers, who responded with tear gas and other less lethal means. Troops fired at Palestinians who attempted to breach the border fence and enter Israel.

The army said it struck two Hamas posts in the Strip. One was attacked in response to a grenade thrown towards troops along the border, while another was hit after protesters damaged military infrastructure.

The Hamas-run Gaza health ministry said a 17-year-old teen was killed in the demonstrations and 94 people were wounded, of which 30 had been injured by gunfire.

Balloons with incendiary devices attached were again flown across the border, after being largely absent in recent weeks. Two fires broke out in Israel as a result of the arson attacks.

Photos showed other demonstrators burn dolls and cutouts of the US president and trample pictures of him. One demonstrator carried a bloodied up puppet of the American leader.

Friday’s protests are the first since the US announced it was cutting all aid to UNRWA, the UN agency responsible for Palestinian humanitarian assistance.

“The rights of the Palestinian people will not be decided by the White House,” Hamas said in a statement. “They are decided by marches and the sacrifices of the people.” 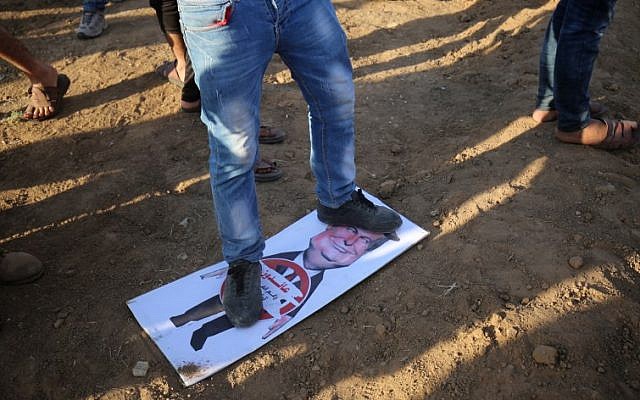 A Palestinian protester stands stepping on a cartoon sign depicting US President Donald Trump with a caption below reading in Arabic ‘We are returning in spite of you, Trump,’ during a demonstration at the Israel-Gaza border, east of Gaza City in the central Gaza Strip on September 7, 2018. (AFP/Said Khatib)

Recent weeks have seen far less violence at the border than at the height of the protests some months ago. But Hadashot TV reported that Friday’s demonstrations were expected to be the largest in some time, with Hamas leader in Gaza Yahya Sinwar saying Israel was showing reluctance to make progress in ceasefire negotiations, and warning of renewed pressure at the rallies.

Earlier Israeli aircraft opened fire at a group of Palestinians who were trying to send incendiary balloons over the border in the northern Gaza Strip, the military said. Two people were lightly injured, according to reports in Gaza.

There have long been reports of talks on a UN- and Egypt-brokered truce agreement that would end a months-long flareup of hostilities — the most severe since the 2014 war.

The surge of violence in Gaza began in March with a series of protests along the border that were dubbed the “March of Return.” The clashes, which Gaza’s Hamas rulers orchestrated, have included rock and Molotov cocktail attacks on troops, as well as attempts to breach the border fence and attack Israeli soldiers.

Since the protests began in March, at least 125 protesters have been killed by Israeli fire, according to the Gaza health ministry. Hamas, which seeks to destroy Israel, has acknowledged that dozens of those killed were its members. During that time, a Gaza sniper killed an Israeli soldier.

During the demonstrations, protesters have also launched incendiary kites and balloons into Israel, sparking fires that have destroyed forests, burned crops and killed livestock. Over 7,000 acres of land have been burned, causing millions of shekels in damages, according to Israeli officials.

Last Friday, some 5,000 Palestinians protested along the border, and some 180 were wounded, according to Palestinian reports.

Defense Minister Avigdor Liberman announced on Thursday that the Erez pedestrian crossing into the Strip would be kept closed for a week as punishment over rioting and vandalism perpetrated at the site by a group of Palestinians earlier this week.