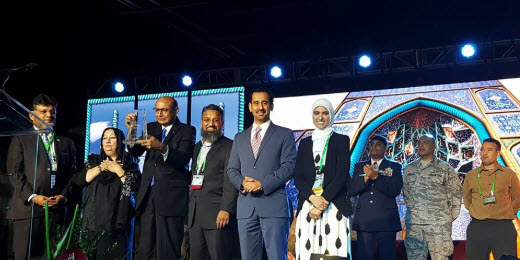 From August 31 to September 3, the Islamic Society of North America (ISNA) will host its 55th Annual Convention in Houston, Texas. Although ISNA is one of the largest Muslim advocacy groups in the United States, the organization has a history of inviting extremist speakers to address its crowds. This year’s conference fits ISNA’s usual pattern. Titled “In God We Trust,” the convention once again features speakers with long histories of inciting hatred against Jews, women, homosexuals, and other minorities.

One Muslim commentator noticeably missing, however, is Wajahat Ali, a prominent Muslim-American attorney and journalist. His invitation to the ISNA conference was revoked after he took part in the Shalom Hartman Institute’s Muslim Leadership Initiative, a program that “invites North American Muslims to explore how Jews understand Judaism, Israel and Jewish peoplehood.”

According to Ali, his involvement with this interfaith initiative, as well as an article he wrote about his conversations with Israelis, led to his expulsion.

While Ali appears beyond the pale for ISNA and its supporters, some of America’s most extreme Islamist clerics and activists have been judged to be fine additions. Islamist Watch, a project of the Middle East Forum, has put together a small dossier of the worst of these speakers.

Among them is Indonesian imam Shamsi Ali, who has received international praise for his interfaith work. Ali has styled himself as an interfaith advocate in the US — all the while posting very different views, written in Indonesian, on his social media accounts.

Ali has written that “Jews are working to destroy Islam and the Ummah [the worldwide Muslim community],” and has expressed “respect for the fighting spirit of Hamas.” He has also attacked the West’s acceptance of homosexuality, lamenting that Muslims who oppose it are “considered to be against human rights and freedom as well.”

ISNA also invited Hussain Kamani, an American-born instructor at the Qalam Institute, who has endorsed sex slavery. In a talk, Kamani explained that Muslim men may fulfill any sexual desires “with a female slave that belongs to him.” According to Kamani, “those who commit adultery or have sex outside of marriage” must be “stoned to death.” Kamani views Western society as “filth. … We are surrounded by filth … our environment is full of this filth, everywhere we turn.”

There are many more examples in the dossier produced by Islamist Watch. And they include ISNA’s own officials. ISNA stalwart (and former president) Muzammil Siddiqui, for example, has expressed support for laws in countries that punish homosexuality with death.

And ISNA’s current Vice-President, Pervez Nasim, recently approvingly posted a video on his social media of an interview with Ken O’Keefe, a prominent antisemitic conspiracy theorist and Holocaust denier.

In the video, O’Keefe discusses the “so called Holocaust” and angrily asks why “we can’t even talk about Jewish control of the mainstream media.” He accuses Mossad agents of having foreknowledge of the 9/11 attacks, and insists that the US government is “owned by the Jewish state.” Nasim himself has also stated that “victims and survivors of Holocaust are fast losing sympathy,” and that, unlike in Gaza, “at least in Nazi concentration camps there was plenty of water and electricity!”

Islamist Watch contacted ISNA’s about Nasim’s antisemitism. Although ISNA did not respond, Nasim’s name was quickly removed from most of its website, including an eight-month old press release.

ISNA’s choice of speakers reveals the extremist ideals of this Islamist organization. While ISNA claims that  its goals include enhancing “interfaith collaboration” and “civic engagement,” these media-friendly claims are sharply at odds with ISNA’s backstage willingness to offer its pulpits to extremist speakers while denying a platform to a Muslim who engaged in dialogue with Israelis.

ISNA’s real agenda is not found in its public campaigns and press releases, but in the extremist rhetoric of its guest speakers, who peddle hate behind closed doors.