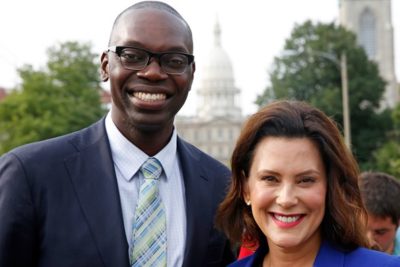 I have long said the Democrats are the party of jihad and Jew-hatred, eliciting the well-worn catcalls and caterwauling of the left-wing smear merchants and goosestepping trolls. But no matter silky smooth the silver-tongued snakes are, reality keeps breaking through. What is shameful about this is that Garlin Gilchrist’s views are mainstream in the Democrat Party today. He should never have been chosen as a candidate for Lieutenant Governor with hateful views of this kind, but this is the way the Democrat leadership, and the Democrat base, thinks. They want candidates like Garlin Gilchrist. And they know they’ll win, because this is their base today.

The Democratic ticket in Michigan’s gubernatorial race has come under fire again, after it was revealed that the nominee for Lieutenant Governor made statements condemning Israel and legitimizing the Hamas terrorist organization.

This after the gubernatorial candidate refused to denounce the anti-Israel Boycott, Divestment and Sanctions movement at a meeting with voters late last month.

Last month, Michigan Democrats nominated former county prosecutor and former Minority Leader of the Michigan Senate Gretchen Whitmer for this November’s gubernatorial race. Joining Whitmer on the ticket is Garlin Gilchrist, a political activist from Detroit and self-described “nonprofit leader”, who is running for Lieutenant Governor.

During a town hall event in late August, Whitmer refused to condemn the anti-Israel BDS movement, avoiding the question when asked and responding only that she would defend the First Amendment right of free speech.

“I recognize the fundamental rights are that we have the right to speak,” Whitmer said, according to video footage of the event obtained by the Washington Free Beacon. “No one gets to infringe on those rights on my watch.”

Following Whitmer’s refusal to take a stance on BDS, it was revealed that her running mate had a history of controversial statements vis-à-vis the Jewish state.

While Gilchrist, who has never held public office before, drew little attention during his primary bid, last week comments – including a statement supporting Hamas as a the ‘legitimate’ representative of Gaza – were unearthed.

On January 4th, 2009, Gilchrist tweeted that he was sick of politicians and Evangelical Christians “kissing Israel’s ass.”

“I’m suck [sic] of politicians and Evangelicals kissing Israel’s ass regardless of what they do in the name of ‘defense’.”

In a follow-up comment, Gilchrist expressed his support for the Gaza-based Hamas terror group as the ‘legitimate’ representative of Gaza, while condemning “Israeli aggression”….