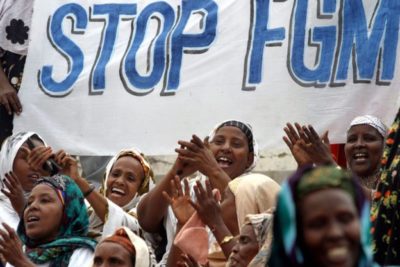 Female genital mutilation (FGM) or clitoridectomy is an Islamic tradition, rampant in the Muslim world. As the hijrah to the West continues, so does the insistence that we adopt Islamic mores and traditions,  no matter how horrific.

Medicalizing clitordectomies. This is the latest approach of Muslim groups.  “Medical.”  There is nothing medical about clitordectomies. It is an affront to the Hippocratic Oath, first do no harm. The same was tried in America.

There was uniform protest by my colleagues, counter-jihadists and other human rights groups to withdraw the American Pediatric Academy’s FGM resolution. And it withdrew the resolution. Some Muslim girls across America were saved in the nick of time ….

Whatever their twisted intention, such consideration was unfathomable to decent, reasoned human beings.

More than 500,000 girls in the US are at risk of this mutilating ‘procedure’.

Muslim doctors arrested in Minnesota for cutting girls are using a ‘religious defense’.

Female genital mutilation (FGM) or clitoridectomy is an Islamic tradition, rampant in the Muslim world. Hadiths have Muhammad justifying it. Over 96% of the women in Egypt have been clitoridectomized. Back in 2008, devout members of the Egyptian parliament have made female genital mutilation (circumcision) legal again in Egypt. With the advent of increased Muslim immigration, this has become a pressing issue here in America. Campaigns like the one described here are foredoomed to failure, because they don’t address the Islamic roots of the problem.

The number of women and girls at risk for female genital mutilation (FGM) in the United States has more than doubled in the past 10 years. More than half a million women and girls in the U.S. are at risk of undergoing FGM in the U.S. or abroad, or have already undergone the procedure, including 166,173 under the age of 18, according to the Population Reference Bureau (PRB).

Unlike male circumcision, female genital mutilation has no health benefits for girls and women.

Femal genital mutilation procedure has no health benefits for girls and women. It removes all possibility of sexual pleasure. It is the worst kind of misogyny.

Procedures can cause severe bleeding and problems urinating, and later cysts, infections, as well as complications in childbirth and increased risk of newborn deaths.

More than 200 million girls and women alive today have been cut in 30 countries in Africa, the Middle East and Asia, where FGM is concentrated.

FGM is mostly carried out on young girls between infancy and age 15.

FGM is a violation of the human rights of girls and women.

FGM is found only within and adjacent to Muslim communities (source: Gerry Mackie, “Ending Footbinding and Infibulation: A Convention Account,” American Sociological Review).

MUSLIM GROUPS CALL FOR FEMALE CIRCUMCISION TO BE MEDICALISED

A number of Sri Lankan Muslim groups have called on the government to medicalise female circumcision.

In representations made to the Parliamentary Committee on Women and Gender, members of the All Ceylon Jamiyathul Ulama, All Ceylon YMMA Conference, Centre for Islamic Studies and United Religions Initiative urged the Health Ministry to withdraw a recent circular prohibiting medical professionals from carrying out female circumcision.

In their submission, the joint Muslim groups stated that the Muslim community is very concerned about moves to ban this obligatory Islamic duty on the grounds that it is Female Genital Mutilation (FGM).

“We wish to categorically state that the practice of female circumcision is an obligatory Islamic duty, that it confers numerous benefits and is not Female Genital Mutilation. As such we condemn all moves to ban the practice of female circumcision by legislation and/ or by government bodies and urge that no moves be taken in this direction which we will regard as an unwarranted intrusion on and infringement of our religious duties guaranteed by the law and constitution of the Democratic Socialist Republic of Sri Lanka”, the Muslim representatives said in their submission. “We also request the Ministry of Health to withdraw a recent circular it issued prohibiting medical practitioners from performing the procedure and to issue a fresh circular excluding Islamic female circumcision a.k.a hoodectomy from the definition of FGM”

Joint Spokesperson Noor Hazeema Haris said that although Muslims wholeheartedly support the abolition of traditional practices harmful to women and children such as FGM, in case it is shown to exist in Sri Lanka, the Islamic practice of female circumcision is vastly different. She pointed out that this religious obligation practiced by the Muslims of the country for centuries in keeping with the requirements of the Islamic faith is not FGM. This was evident from the Joint Ministry of Health (MOH) and WHO report on Violence and Health in Sri Lanka in 2008, which states categorically that FGM does not exist in Sri Lanka.

She further pointed out that female circumcision practiced by Muslims is a very minor procedure similar to male circumcision where the prepuce of the clitoris is removed. This is the same as hoodectomy which is a legal cosmetic procedure chosen by women to improve genital hygiene and enhance their sex lives.

“It is something that is arranged and done by women. Those who say this is male oppression against women are mistaken. It is we who do it just like our mothers and grandmothers and countless generations of our women have done. We continue to practice it because we know it benefits us. Even educated Muslim women support it wholeheartedly”, she added.

The submission concluded that female circumcision like male circumcision is a religious obligation for Muslims and that their religious rights as Sri Lankan citizens are safeguarded by the Constitution of Sri Lanka. Since this is a religious obligation, almost all Muslim Women and girls would have to undergo the procedure by hiring the services of traditional female circumcisors known as Ostha Mamis in case doctors refuse to perform this procedure citing the above mentioned circular. This could lead to serious medical complications which would amount to FGM.

If as medical complications have arisen among some women circumcised by Osthamaamis as alleged by Women’s Rights groups, it is all the more reason to medicalise the procedure instead of prohibiting it, which will only drive the procedure underground and put girls and women at unnecessary risk.

“We therefore urge the Parliament of Sri Lanka to reject any legislation drafted with a view to prohibit the practice of female circumcision as it will be infringing on the rights of Muslims to the free practice of their faith.We also urge that the Ministry of Health immediately withdraw  the said circular and if needs be, issue a fresh circular prohibiting FGM, but exempting the Islamic procedure of female circumcision from the definition as done in other Muslim countries like Indonesia” concluded the submission.

The committee agreed to give them a hearing and requested that medical evidence be submitted to prove that female circumcision of the type prescribed in Islam causes no harm and benefits women as stated by the joint representatives.