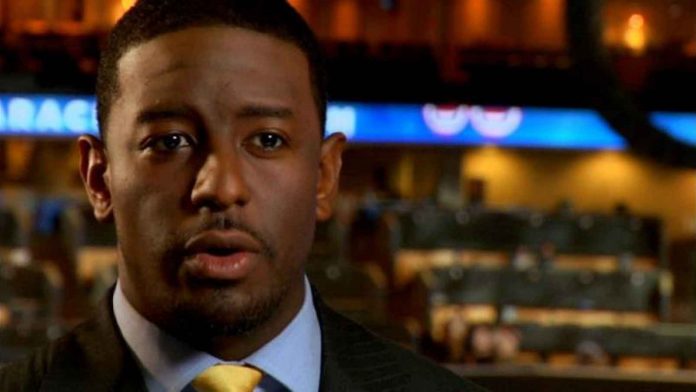 A few days ago, 39-year-old Andrew Gillum – the Tallahassee, Florida mayor who proudly embraces the socialist political and economic agenda of Bernie Sanders – won his party’s gubernatorial primary race in that state. This sets the stage for November, when Gillum will face Republican Ron DeSantis in the election for governor. Gillum’s campaign has been endorsed not only by Sanders, but also by Our Revolution, an activist organization that explicitly promotes the Vermont senator’s agenda.

Gillum has a long history of political activism that stretches back to his school days. When he was enrolled at Florida A&M University, for instance, he was very active in the Student Government Association. In early 2000, Gillum helped organize a large “March on Tallahassee” to protest Governor Jeb Bush’s 1999 executive order abolishing affirmative action in state university admissions and state contracting. To reward Gillum’s activism vis-a-vis this and other matters, the Center for Policy Alternatives recognized him as the nation’s top student leader in 2001.

In 2002, Gillum became the Florida Field Organizer with the People For the American Way Foundation (PFAWF), spearheading its “Arrive With 5” initiative – a pro-Democrat voter-mobilization campaign whereby young people pledged to bring five additional voters with them to the polls on Election Day.

In 2003, the Florida Democratic Party recruited Gillum to serve as its interim Political Director, but before long he returned to his previous position with PFAWF. Also in 2003, Gillum was elected to the Tallahassee City Council, a post he would hold for the next 11 years.

In late 2004, Gillum, in addition to his City Council duties, became the National Deputy Director of PFAWF’s “Young People For” program, a campus-based initiative designed to develop young leftist leaders across the United States. In 2006 he established the Young Elected Officials Network, which had a similar mission. The leading funder of this organization was George Soros‘s Open Society Institute. Soros, of course, is the multi-billionaire who has long bankrolled a myriad of far-left causes.

In 2014, Gillum was elected Mayor of Tallahassee. Two years later, he was given a platform from which to speak at the Democratic National Convention in Philadelphia.

On a variety of key political issues, Gillum:

The two leading individual donors to Gillum’s 2018 campaign have been George Soros and another left-wing billionaire, Tom Steyer. Scarcely two weeks ago, Soros, who already had contributed $1 million to Gillum’s Forward Florida political committee, announced that he was giving $250,000 more. And Steyer, who had previously funneled $500,000 to Forward Florida, pledged another $300,000. “I’m obviously deeply appreciativeof Mr. Soros, as well as Mr. Steyer, both men who I’ve known them for some time,” said Gillum. The most recent Soros/Steyer donations coincided with a $3.5 million get-out-the-vote effort by a coalition of pro-Gillum leftist organizations.

In addition to his political activities, Gillum also serves as a Board of Directors member with the New World Foundation, a far-left entity that was once chaired by none other than Hillary Clinton.