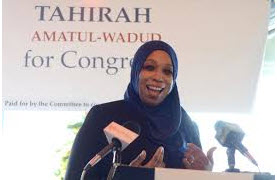 On Tuesday, September 4, U.S. Rep. Richard Neal successfully defended his Massachusetts seat from fellow Democrat Tahirah Amatul-Wadud, an attorney from Western Massachusetts. Ms. Amatul-Wadud had been widely portrayed as a Progressive standard-bearer, with fawning coverage from the Huffington Post, Nation, Intercept, and many other outlets. As desperate as Progressives are to find champions against the Establishment, they should have done their due diligence: Ms. Amatul-Wadud has deep and unexplained connections with a Pakistani cult that has committed murders on U.S. soil.

Ms. Amatul-Wadud is closely related to Muslims of America (MOA), acting as one of its lawyers. MOA is a radical organization founded by the Pakistan-based Islamic cleric Sheikh Mubarak Ali Gilani, which serves as the U.S. mouthpiece of the radical Pakistani organization Sheikh Gilani leads, Jamaat Al-Fuqra — which has repeatedly been under Federal investigation for terrorism.

Research into the past activities of MOA and Sheikh Gilani turns up an astounding amount of extremism, terrorism, fraud, and murder. Ms. Amatul-Wadud is surely allowed to have them as clients, but it is astounding to think that the Progressive moment was blithely about to send a Gilani admirer to Congress.

As has been extensively catalogued in academic databases of terror groups, Jamaat Al-Fuqra is an Islamist “cult” which has been involved in a number of terrorist incidents in the United States. For example, two Al-Fuqra members were convicted of murdering the heterodox Tuscon, Arizona Imam Rashad Khalifa. Others are alleged to have assassinated Ahmadiyya leader Mozaffar Ahmad in Canton, Michigan, in 1983. (Ahmadiyya is an Islamic movement known for its moderate interpretation of Islam. Ahmadis are routinely discriminated against in most Muslim countries — particularly in Pakistan, where they were declared as a non-Muslim minority because of riots and pressure exerted by clerics from Barelvi and Deobandi Islamic sects. Sheikh Gilani, who is Barelvi, and his Fuqra group have even called for the genocide of Ahmadis,labeling them as swine.)

In 1993, Colorado authorities shut down a wide-ranging fraud ring in which al-Fuqra members used welfare fraud and bogus worker-compensation claims to steal over a half million dollars, much of which went to buy land for paramilitary training camps. In 1994, MOA members Barry Adams (alias Tyrone Cole) and Wali Muhamad (alias Robert Johnson) were convicted of conspiring to bomb a Hindu temple in Toronto and kill thousands. During the investigation, Toronto police seized a book written by Gilani, Mohammedan Revelation, in which he wrote, “The mission of this Jamaat al-Fuqra (Army of the Poor) is to lead Muslims to their final victory over Communists, Zionists, Hindus (and) deviators.”

Sheikh Gilani is also known for having ties to Pakistan’s Inter-Services Intelligence (ISI), and for recruiting members for jihadin Indian-controlled Kashmir. During the 1980s and 1990s, MOA reportedly sent more than 100 of its members to Pakistan, ostensibly for religious study; but U.S. sources claimed that the real purpose was to receive military training, with dozens of individuals going on to the “fields of jihad” in Kashmir, Chechnya, and Afghanistan. (In a recruitment video from the early 1990s, Gilani spoke of the “highly specialized training in guerrilla warfare” he offered his followers.)

American journalist Daniel Pearl was kidnapped and murdered when he was on his way to interview Sheikh Gilani. Though not responsible for the kidnapping, Gilani claimed that Pearl was an Israeli agent sent to assassinate him as part of a Zionist conspiracy.

Now, even extremist groups need lawyers, and one could have viewed Ms. Amatul-Wadud’s relationship with MOA and Jamaat al-Fuqra as purely professional — were it not for her professed admiration for Gilani. In 2014, Sheikh Gilani published an article on MOA’s website where he displayed his extreme anti-Semitism and claimed that Nazi Germany was not an enemy of the U.S, that 9/11 was an inside job, and that the Wahhabism was a creation of British intelligence. He wrote:

There was no need for America to go to war against Hitler. Hitler was not the enemy of America or the American people. There was a mutual animosity between Hitler and the Jews. So, the American people paid a very heavy price for fighting someone else’s war.

Shockingly, this conspiracy-mongering screed was then shared by now-congressional candidate Tahirah Amatul-Wadud on her Facebook profile.

On her campaign website, Ms. Amatul-Wadud claimed that she intends to “combat terrorism and supremacy in all forms.” Apparently this was enough to convince her Progressive supporters—who should instead have asked her whether she intends to fight Islamic supremacism and Islamist extremism as well, particularly as practiced by Jamaat al-Fuqra.

Conceivably, Ms. Amatul-Wadud might have had reasonable explanations for her relationship with MOA and Al-Fuqra. But if so, she has chosen not to share; Ms. Amatul-Wadud has never addressed her connections to Al-Fuqra or denounced its retrograde ideology. Nor have her Progressive supporters ever asked her to, or even acknowledged that her relationship with a group that has shed American blood was problematic in the first place.

This illustrates a dangerous weakness of the modern Progressive movement. It seems to be far too easy for a candidate to mouth the right Progressive slogans and be embraced, without any due diligence or concern for the candidate’s extremist connections. Ms. Amatul-Wadud herself may be an extremist, or she may (somehow) not be; but Progressives seemed to be oblivious to the possibility.

Massachusetts got lucky this time. But the Progressive movement has a responsibility to itself (not to mention the country) to be more careful in who it anoints as its champions.