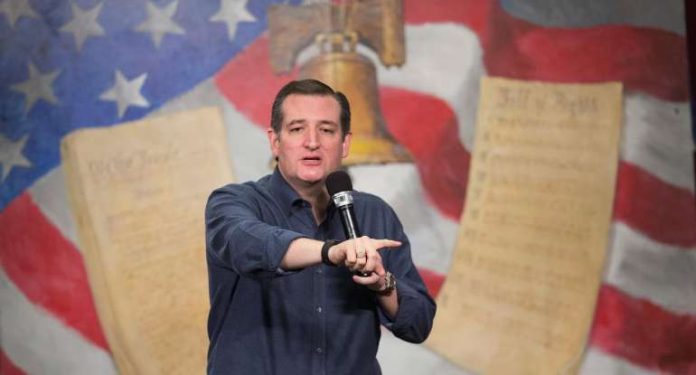 Amidst a highly visible reelection campaign, Senator Ted Cruz (R-TX) renewed a call last week for the Muslim Brotherhood to be designated a terrorist organization.

This follows the Trump administration’s designation earlier this year of two affiliates of the Egyptian Muslim Brotherhood — Hasm and Liwa al-Thawra — as terrorist organizations:

The House companion bill, H.R. 377, is sponsored by Rep. Mario Diaz-Balart and currently has 76 House co-sponsors.

Speaking at a Capitol Hill event last week, Cruz invoked the Obama administration’s efforts to purge terror watch lists of anyone connected to the Muslim Brotherhood, and also the Justice Department’s successful arguments during the Holy Land Foundation trial in 2008 that the Muslim Brotherhood established support networks in the U.S. to support the terrorist group Hamas.

Cruz called for the designation for the “clarity” of standing with our allies (comments begins ~12:30):

I would note, that that clarity is closely related to the bill we were talking about just a minute ago. The legislation that I’ve introduced to designate the Muslim Brotherhood as a terrorist organization. You know, we live in an era of political correctness. But during the Obama regime, it was beyond political correctness. It was an Orwellian double-speak.

I chaired a hearing on the willful blindness of the Obama administration to radical Islamic terrorism. What we’ve heard, among others, is a DHS whistleblower who explained the Department of Homeland Security had edited or deleted over 800 records to remove references to jihad or Muslim Brotherhood. Simply to delete them. And that it was a purge directed by the White House in writing and they used that word — purge — purge out any references. That blindness is dangerous and makes it vulnerable.

The men and women here know the Muslim Brotherhood’s motto is “Jihad is our way and dying in the way of Allah is our highest hope.” This is who some in the press and some in the political world urge us to think of as a moderate group. Well, read the Brotherhood’s explanatory memorandum on the general strategic goal for the Brotherhood in North America. It says, “the process of settlement is a civilization jihad process. The Muslim Brotherhood must understand that their work in America is a kind of grand jihad in eliminating and destroying the western civilization from within and sabotaging its miserable house by their hands and the hands of the believer.”

Muslim Brotherhood does not hide that they are a terrorist organization.

Egypt has already designated the Muslim Brotherhood as a terrorist organization. Perhaps because they have seen firsthand what that terror looks like, and the slaughter that it can produce. We need that same clarity. So, I thank you for urging Members of Congress to pass the legislation. I would note also, the administration can do this. We need to pass the legislation, but the administration can do so on its own as well.

Among other issues covered in Cruz’s speech was his support for the Trump administration’s move of the U.S. Embassy in Israel to Jerusalem. After that announcement, the Muslim Brotherhood issued a statement declaring the U.S. the “enemy of the Arab world.”

The Muslim Brotherhood has bragged about heavily lobbying Congress to prevent any designation, as well as spending $5 million to derail designation efforts:

Reports On Creation Of Muslim Brotherhood Lobby To Prevent Trump Admin From Designating It A Terrorist Organizationhttps://t.co/XB5elZQHb0 pic.twitter.com/dHHor6JDmG

Just last year, an Arizona man Ahmed Mohammed el-Gammal was convicted of material support for terrorism for assisting a New York college student’s travel to Syria to join ISIS. El-Gammal admitted to being a Muslim Brotherhood supporter, and prosecutors claimed he used a fellow Egyptian Muslim Brotherhood contact living in Turkey to assist the NY student in crossing the border to Syria and joining an ISIS terror training camp.

Also last year, I reported details in my exclusive three–part interview in Cairo with Egyptian terrorism expert Khaled Okasha, the former head of counterterrorism in the Sinai. Okasha traces the origins of Hasm and Liwa al-Thawra to the efforts of Muslim Brotherhood Guidance Bureau leader Mohamed Kamal. Kamal was killed in a shootout with police in October 2016. Okasha explained that the terror groups are still under the effective control of the Muslim Brotherhood after Kamal’s death.

As I’ve reported here at PJ Media previously, many of our Middle East allies, including Israel, have already designated the Muslim Brotherhood a terrorist organization:

Following Israel’s designation of the Muslim Brotherhood, the Shin Bet announced that the group was behind a July 2017 terror attack on the Temple Mount that killed two Israeli police officers:

Given the few legislative days left in the current Congress, it’s unlikely either Cruz’s Senate bill or the companion House bill will be considered this year.

However, given evidence that the Trump administration already has in its possession about the Muslim Brotherhood’s terror support, the Treasury and/or State Department could designate the group at any time.