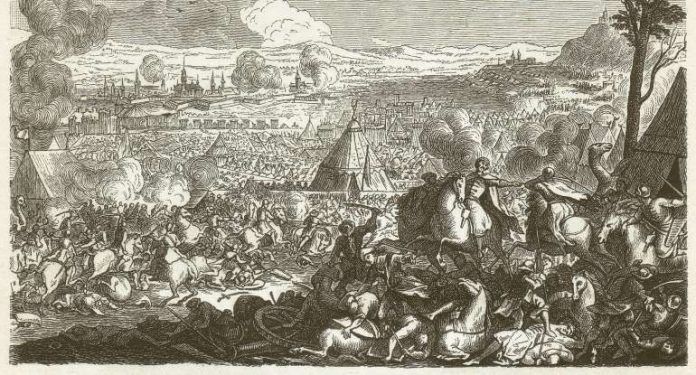 (This article is adapted from the author’s new book, Sword and Scimitar: Fourteen Centuries of War between Islam and the West. All quotes are sourced therein.)

On September 11, 1683 — 335 years to the day before the Twin Towers of New York came crumbling down — another Western city, Vienna, stood between life and death, also against the jihad.

Two months earlier, the largest Islamic army ever to invade Europe — 200,000 combatants under Ottoman leadership — had come desiring “to fight generously for the Mahometan faith … for the extirpation of infidels, and the increase of Muslemen,” as quoted by a contemporary.

Having surrounded the walls of Vienna on July 14, Ottoman grand vizier Kara Mustafa followed protocol. In 628, his prophet Muhammad had sent an ultimatum to Emperor Heraclius: “Aslam taslam” — “submit [to Islam] and have peace.” Heraclius rejected the summons, jihad was declared against Christendom (as enshrined in Koran 9:29), and in a few decades, two-thirds of the then Christian world — including Spain, all of North Africa, Egypt, and Greater Syria — were conquered.

Over a thousand years later, the same ultimatum of submission to Islam or death had reached the heart of Europe. Although Starhemberg, the Viennese commander in charge, did not bother to respond to the summons, graffiti inside the city — including “Muhammad, you dog, go home!” — captured its mood.

On the next day, Mustafa unleashed all hell against the city’s walls. For two months, the holed-up and vastly outnumbered Viennese suffered plague, dysentery, starvation, and many casualties.

Then, sometime around September 11, as the Muslims were about to burst through, the desperate commander fired distress rockets into the night sky to give “notice to the Christian army” — that is, the relief force Vienna had beyond all hope been counting on — “of the extremity whereto the city was reduced.” Understanding exactly what these rockets signified, cries of “Allahu Akbar!” followed them, as the Ottomans implored their deity to “obliterate the infidels utterly from the face of the earth!”

It was then that it happened: “After a siege of sixty days,” wrote an anonymous eyewitness, “accompanied with a thousand difficulties, sicknesses, want of provisions, and great effusion of blood, after a million of cannon and musquet shot, bombs, granadoes, and all sorts of fireworks, which has changed the face of the fairest and most flourishing city in the world, disfigured and ruined [it],” continued the verbose writer, “a vigorous defense and a resistance without parallel, heaven favorably heard the prayers and tears of a cast down and mournful people.”

To the city’s great joy, Starhemberg’s distress rockets were answered by a hail of fireworks that lit the night sky. A Holy League, consisting of some 65,000 heavily armed Poles, Austrians, and Germans, all hot to avenge the beleaguered city, had come. Even worse for the Ottomans, they were under the overall command of the formidable king of Poland, John Sobieski, who firmly believed: “It is not a city alone that we have to save, but the whole of Christianity, of which the city of Vienna is the bulwark.”

Battle commenced in the early morning hours of September 12 with several exchanges of artillery fire amid the rocky crags and slopes of Kahlenberg Hill, where the Europeans had camped the night before. The Austro-Germans, out to avenge what Vienna had been subjected to, fought fiercely, but no matter how many Turks and Tatars they hewed, more appeared. By afternoon the wearied and would-be liberators paused.

Suddenly a large white banner emblazoned with a red cross appeared on the opposite slope: the Poles — loudly calling on divine aid and appearing to the Turks like “a flood of black pitch coming down the mountain consuming everything it touched” — had finally appeared, fighting manfully and encouraging their Austro-German counterparts. An uncoordinated mass of horses, men, steel, and gunfire clashed and boomed around the ravines and rubble of the Kahlenberg — even as the noose continued to tighten around Vienna.

Fierce but indecisive fighting continued for hours until Sobieski espied a weakness in the Muslim line. He instantly ordered history’s largest cavalry charge straight through it and straight for the grand vizier’s tent. At the head of some twenty thousand Polish, German, and Austrian horsemen, Sobieski, with his young son by his side, crashed with thunderous violence into the Ottoman line. Wearing heavy armor with eagles’ wings, carrying large lances, and astride even larger and heavily armored steeds of war, three thousand hussars — the elite cavalry of the Polish army that surrounded its king — were an especial sight to behold: to the besieged Viennese, some of whom were now sallying forth to join the fray, they looked like winged liberators; to the increasingly demoralized Muslims, they looked like avenging angels and “struck fear in the hearts of the Turks and their Tartar allies.”

“By Allah, the King is really among us?” blurted Murad Giray, the dismayed khan of Crimea, on seeing Sobieski present and fighting. When Mustafa ordered him to redouble his efforts, “the Tatar Prince replied, that he knew the King of Poland by more than one proof, and that the Vizier would be very happy if he could save himself by flight, as having no other way for his security, and that he was going to show him example.” And off scurried the khan with his hordes.

By sunset, some fifteen thousand Ottomans lay dead on the ground. The rest, including Mustafa himself, fled as best they could back to Ottoman territory. (That Christmas Day, 1683, as all of Christendom rejoiced, Mustafa — this man “who thought to have invaded the Western Empire, and carried everywhere fear and terror” — was beheaded by Ottoman command, his head sent to Sultan Muhammad IV.)

Although a spectacular victory, the aftermath was gory: before engaging the European army, the Muslims had ritually slaughtered some 30,000 Christian captives collected during their march to Vienna — assiduously raping the women and children beforehand. On entering the relieved city, the liberators encountered piles of corpses, sewage, and rubble everywhere — Vienna’s “Ground Zero.”

As a contemporary explained:

Desolation was nothing less in the city of Vienna, where the King entered the day after the battle, and found heaps of ruines, rather than houses, and even the emperor’s palace reduced to ashes, by the cannon and bombs: but he was eased of the grief which this dismal spectacle had occasioned, by the acclamations of the inhabitants, who thinking no more of their past calamities, were transported with joy for their unexpected deliverance: The city not being able to hold out two or three days more.

The Holy League of Polish, German, and Austrian forces remained intact and went on the offensive against the Turks. Two years later, Orthodox Russia joined the Catholic league. Between 1683 and 1697, fifteen more major battles were fought between the Turks and Christians, twelve won by the latter.

By 1699, the Ottoman Empire — “which had terrified Christendom for over three hundred years” — was reduced to signing the humiliating Treaty of Karlowitz, which required it to cede large territories back to its infidel enemies and thus marked the beginning of the end of Islamic power. As the late Bernard Lewis puts it: “The last great Muslim assault on Europe, that of the Ottoman Turks, ended with the second unsuccessful siege of Vienna in 1683. With that failure and the Turkish retreat that followed, a thousand years of Muslim threat to Europe came to an end.”

Until recent times, that is.