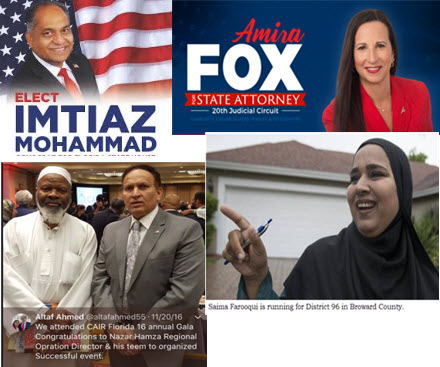 Saima Farooqui is running for Florida House of Representatives, District 96. Farooqui is Secretary of the American Muslim Democratic Caucus of Florida. CAIR has posted about Farooqui on social media. Farooqui has been at events with Linda Sarsour. Saima will face Kristin Jacobs in the primary election on August 28th 2018. There are no Republicans running for this seat. UPDATE: Saima Farooqui was defeated in the primary election.

Imtiaz Ahmad Mohammad is running for Florida House of Representatives, District 97. Mohammad is an immigrant from Pakistan and has only been a U.S. citizen for four years. Mohammad is connected to Linda Sarsour, Keith Ellison, Broward County Sheriff Scott Israel, Broward County Sheriff’s deputy Nezar Hamze, Debbie wasserman Schultz and longtime Clinton contributor Asif Mahmood. Mohammad will face Incumbent Jared Evan Moskowitz in the Primary Election on Aug. 28, 2018. There are no republicans running for this seat. UPDATE: Imtiaz Ahmad Mohammad was defeated in the primary election.

Rizwan Ahmed is running for Florida House of Representatives, District # 111. Ahmed has attended events and taken photos with Linda Sarsour. Ahmed is running unopposed in the Democratic primary. He will face Bryan Avila in the General Election in Nov.

Amira Fox AKA Amira Dajani is running for State Attorney of the 20th Judicial Circuit. According to centralfloridapost.com, Dajani has “deep family ties to the radical terrorist organization known as the Palestinian Liberation Organization or PLO.” UPDATE: Amira Fox won the primary election.