TUW Commentary:  Ari Fuld was a friend of Tom Trento and The United West.  This is a very sad time to hear of Ari’s death.  We pray for his family’s loss and healing.  And will continue to Defend Israel and support all they do to fight against the terrorists attacking Israel and it’s citizens.  Ari worked very hard to stand against those terrorists and was a great Patriot for Israel!  He will be missed!

The Israeli man stabbed to death in a terror attack in the central West Bank on Sunday was identified as Ari Fuld, a 45-year-old father of four from the Efrat settlement.

Shortly before noon on Sunday, a Palestinian teenager stabbed Fuld outside a shopping mall near Efrat, at the Gush Etzion Junction south of Jerusalem.

Despite his wounds, Fuld chased and shot at his attacker before collapsing to the ground. 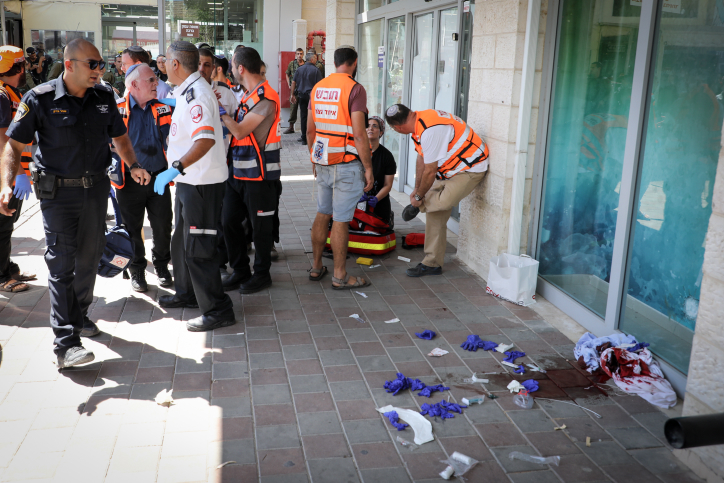 Medics arrive on the scene after an Israeli man was stabbed in a terrorist attack at a shopping mall next to the Gush Etzion Junction on September 16, 2018. (Gershon Elinson/FLASH90)

The attacker was shot by Fuld and another armed civilian at the scene and taken to Hadassah Hospital Mount Scopus in moderate condition with multiple gunshot wounds, hospital officials said.

The terrorist was identified as a 17-year-old Palestinian from the village of Yatta, near Hebron. His name has not yet been released.

Lawmakers from across the political spectrum praised Fuld, an American immigrant to Israel, for his actions.

“With a stab wound in the back he ran, drew his gun and fired before collapsing, just to make sure the terrorist would not continue to hurt others,” Education Minister Naftali Bennett, who heads the national-religious Jewish Home party, wrote on his Twitter account.

“My deepest condolences to the family of Ari Fuld — may his memory be blessed — who showed incredible courage and who chased after the terrorist despite his injuries,” wrote Zionist Union MK Ksenia Svetlova.

Fuld worked at Standing Together, a non-governmental organization that provides support to Israeli soldiers. He also described himself on his website as an “advocate for Israel, [who] speaks to communities throughout the globe.”

Fuld volunteered for military service in an IDF infantry brigade in a combat role, then served as a reservist. He was lightly injured in the Second Lebanon War.

He was a prominent member of the National Union party, including serving on its Central Committee. National Union is part of the Jewish Home faction in the Knesset. Ari’s brother Eitan is the spokesman for Jewish Home MK Betzalel Smotrich.

In a statement, the National Union party eulogized Fuld as a “lover of the land who fought for it, a man of truth, caring and kind. He advocated for the land of Israel with all his might, in Israel and around the world.”

With a heavy heart and rivers of tears, Am Yisrael lost a hero today from Terror.
The most articulate and unapologetic fighter and lover for Israel, Ari Fuld, has been taken from us.
To his family, May G-d comfort you among the mourners of Zion and Jerusalem. pic.twitter.com/c74ApqjhVx

It added: “We stand with our friend Eitan Fuld, who lost his brother. We send our condolences to the family. May you never know more sorrow, and be comforted by Heaven. We wish to take this opportunity to reiterate our demand to restore Israeli deterrence and demolish all the homes of terrorists.”

Former US ambassador to Israel Dan Shapiro also expressed his “Deepest condolences to the family and loved ones of Ari Fuld, murdered in Gush Etzion today. The attack was an outrageous act of terrorism, which should be loudly condemned by all. May Ari’s memory be a blessing and a source of comfort to his family and community.”

After the attack, Defense Minister Avigdor Liberman vowed that Israel would fight terrorism “with an iron fist.”

“My heart is with the Etzion Bloc. My condolences to the families of the victim. We will continue to fight terrorism with an iron fist,” he said in a tweet.

Gush Etzion Regional Council head Shlomo Ne’eman demanded that “the government must take a strong response against those who want to destroy the State of Israel.”

“I want to clarify to our enemies in the names of the residents of Gush Etzion — Gush Etzion will prevail. We are here forever. Our response to terror and death will be to continue to build, to create, and to add life.”

He added, “Our Arab neighbors have a choice to make – either you live with us here and behave like human beings or you choose the path of terror and evil, knowing that you will pay the full price. I call on the government of Israel and the IDF to respond appropriately and seriously manner, to destroy the terror infrastructure.”

Palestinian terrorist groups in the Gaza Strip released a joint statement praising the stabbing attack as a “heroic operation.”

A spokesperson for the Gaza-ruling Hamas terrorist group told the Palestinian news outlet Safa that Palestinians have a “legitimate right to exercise resistance in all its forms against the Israeli occupation.” 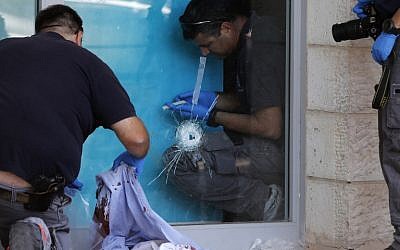 Israeli policemen inspect the scene of a deadly terror stabbing at a mall next to the Gush Etzion Junction in the central West Bank, on September 16, 2018. (AFP Photo/Ahmad Gharabli)

Following the attack, the Israeli military set up a number of roadblocks in the area. Soldiers also raided the hometown of the assailant, according to Palestinian media.

Security camera footage from the scene showed the young man, dressed in black, standing behind Fuld for nearly a full minute before striking.

The Gush Etzion Junction and nearby shopping area, which are used by both Israelis and Palestinians, have been the site of several deadly terror attacks in recent years.

Fuld’s funeral will take place at 11:00 p.m. Sunday at the Kfar Etzion settlement.