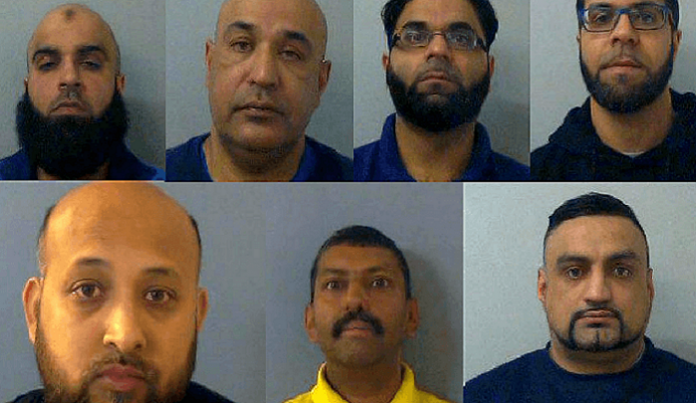 First Rotherham: some 20 rapists, and 1200 victims.  Then Rochdale, another nine men preying on underaged girls. Then Telford, dozens of abusers and hundreds of victims.

Now it’s Oxford, and yet another Muslim rape ring:

Seven men have been found guilty of grooming and sexually abusing teenage girls “on a massive scale” in Oxford.

The gang was convicted of more than 20 offences including rape and indecent assault between 1998 and 2005.

Prosecutor Oliver Saxby QC said they carried out the “routine, cynical and predatory sexual exploitation” of vulnerable girls who were groomed with alcohol and drugs.

The five victims were aged between 13 and 15 when the offences started.

The names of the guilty:

It is extraordinary that this phenomenon gets so little attention, at least in proportion to the evil.

What else is being withheld about the cost of Britain’s immigration program?

They’re due for sentencing in June. Until then and beyond, left-wing feminists will continue their long campaign of total silence on these atrocities.

Douglas Murray on the BBC’s refusal to cover the Telford rape ring:

In fact, the mass gang-rape of underage girls in Shropshire didn’t even make it to the homepage of BBC Shropshire. Only after a fair amount of comment about this online did the BBC manage, this afternoon, to squeeze the rape of the area’s kids into their round-up of Shropshire news.

So now, finally, there is a headline story about the case. Though it may be said to fit jarringly with the ‘My Telford’ video also on their front-page in which the BBC has splashed out some money on a videoin which students at Hadley Learning Community ‘Tell their Telford stories to BBC Radio Shropshire.’ I suppose we can just agree that it is to everyone’s regret that while the BBC was choosing to spend part of the license fee on this pointless piece of feel-good pabulum they forgot to make a video-story in which young women in Telford could have told about their very different Telford experience.

That ‘My Telford’ could have been a really interesting and important video. Or it would have been if every single arm of the state plus the official state broadcaster hadn’t already decided that the children of Telford being gang-raped on an industrial scale (Telford is a town of just 170,000 people) is one big yawn-fest. Or that they basically agree with the very basic Labour MP Naz Shah who last year revealed her own opinions about all this when she re-Tweeted a (satirical) Tweet suggesting that the victims of the Rotherham sex abuse scandal should ‘shut their mouths. For the good of #diversity.’

Reader Dracon says I missed a few other such rape rings: in Derby, Oxford (again), Bristol, Banbury, Aylesbury, and Keighley

This is quite extraordinary.