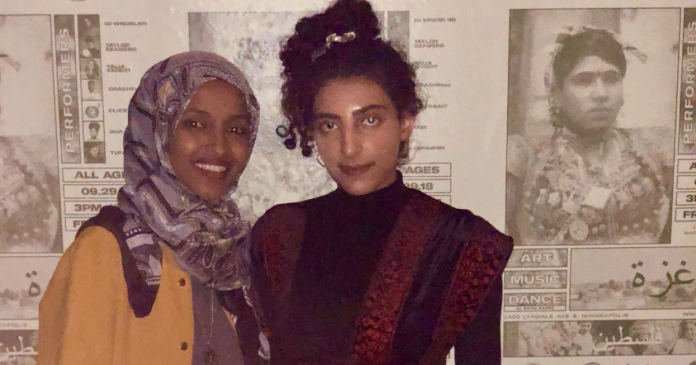 MINNEAPOLIS, MN — On Saturday, September 22, 2018, Ilhan Omar, a congressional candidate in Minnesota’s 5th Congressional District spoke at a fundraiser that was raising money for Palestinians in the territory controlled by Hamas, a designated Islamic terrorist organization. 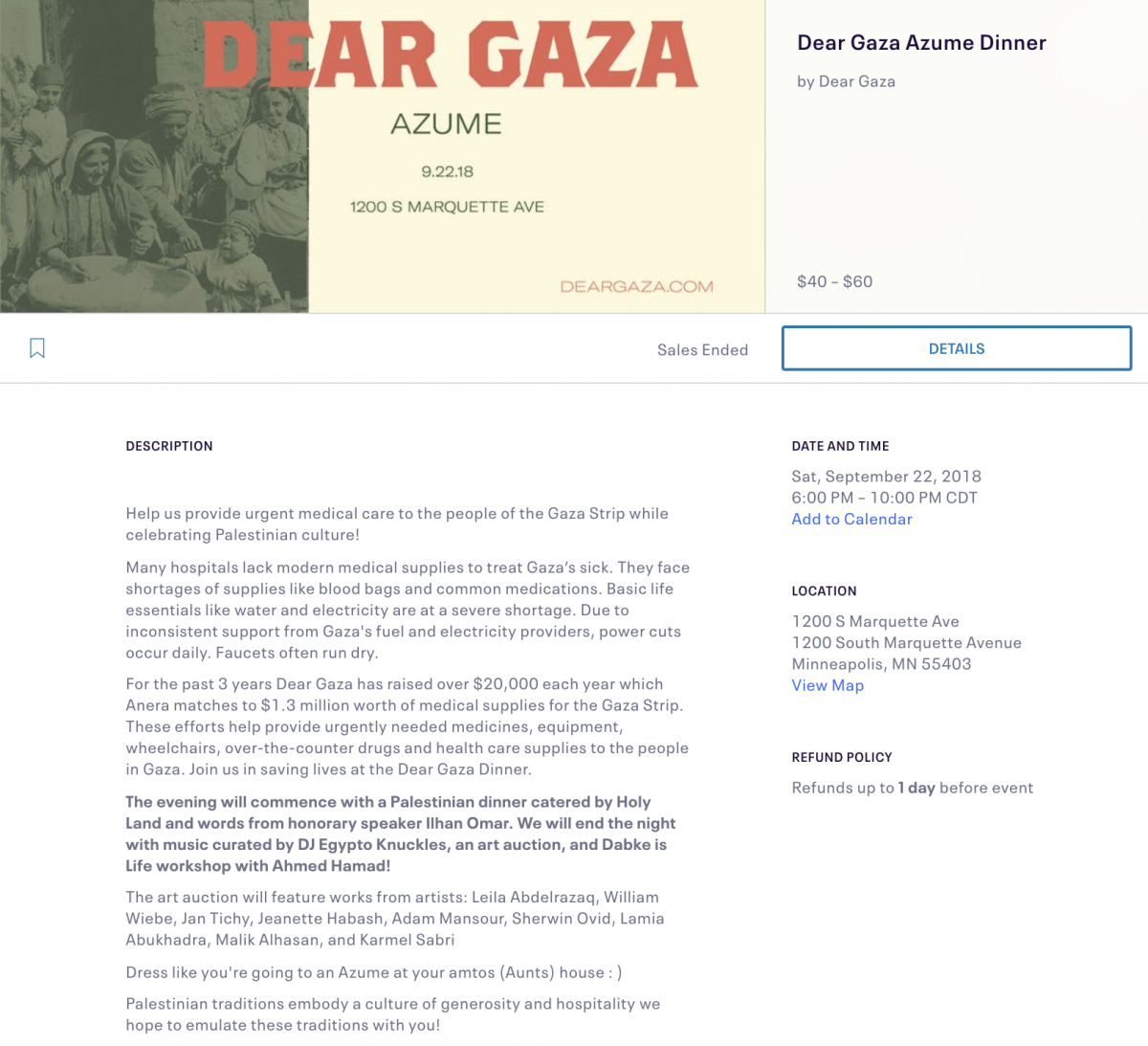 Omar was listed as a special guest speaker at the “Dear Gaza Azume Dinner”, where pro-Palestine and pro-Gaza artists and community members were invited to raise funds to provide medical care to people in Gaza, which is controlled by HAMAS. Shockingly, the fundraiser was hosted by Westminster Presbyterian Church.

“Help us provide urgent medical care to the people of the Gaza Strip while celebrating Palestinian culture!

For the past 3 years Dear Gaza has raised over $20,000 each year which Anera matches to $1.3 million worth of medical supplies for the Gaza Strip. These efforts help provide urgently needed medicines, equipment, wheelchairs, over-the-counter drugs and health care supplies to the people in Gaza. Join us in saving lives at the Dear Gaza Dinner.”

While the event may sound innocent to those reading the official event description, the event itself was a front for financing Islamic terrorists.

Because HAMAS is the elected body of government in GAZA, HAMAS controls the distribution of all aid in Gaza. Anybody who wishes to conduct business in GAZA and send monetary resources through GAZA, must directly communicate with HAMAS officials and the Palestinian Authority, both of which are terrorist organizations.

On October 8, 1997, the U.S. Department of State officially recognized HAMAS as a foreign terrorist organization.

According to the U.S. Department of State,

“Foreign Terrorist Organizations (FTOs) are foreign organizations that are designated by the Secretary of State in accordance with section 219 of the Immigration and Nationality Act (INA), as amended. FTO designations play a critical role in our fight against terrorism and are an effective means of curtailing support for terrorist activities and pressuring groups to get out of the terrorism business.”

Thus, by holding a fundraiser for Gaza, which is ultimately a fundraiser for HAMAS, “Dear Gaza”, Ilhan Omar, and the Westminster Presbyterian Church all participated in raising money for a designated foreign terrorist organization.

In an effort to crack down on terrorism and the funding of terrorists, President Donald Trump cut more than $200 MILLION in US aid for Palestinians in August. One of the main reasons why Trump halted aid to Palestinians concerns the Palestinian practice of “pay to slay”, in which HAMAS, PLO, and the Palestinian Authority were paying life long monetary rewards to the families of Palestinian terrorists who killed innocent Jews, Israelis, and Americans.

“We have undertaken a review of U.S. assistance to the Palestinian Authority and in the West Bank and Gaza to ensure these funds are spent in accordance with U.S. national interests and provide value to the U.S. taxpayer,” a senior State Department official said in a statement.

“As a result of that review, at the direction of the president, we will redirect more than $200 million in FY2017 Economic Support Funds originally planned for programs in the West Bank and Gaza.”

On September 10, President Trump also ordered the closure of the Palestine Liberation Organization office in Washington, saying that the PLO “has not taken steps to advance the start of direct and meaningful negotiations with Israel.”

Watch as @LauraLoomer drops a truth bomb at Jihadi @IlhanMN’s fundraiser for Hamas at Westminster Presbyterian Church! This is a prime example of how the Jihadis use Marxists to infiltrate and subvert American government to impose Sharia. @JohnGuandolo @OzraeliAvi @JamieGlazov pic.twitter.com/a8bL9Mxj2k

There was room for plenty of smiles and making new friends at the pro-Israel rally in Minneapolis while taking breaks between protesting the despicable Left & Ilhan Omar raising $$$ for Hamas. @LauraLoomer @HireLearning pic.twitter.com/Hkl7wdiwQV

While knowing that HAMAS is a terrorist organization and while knowing that Gaza is controlled by HAMAS, Omar willingly spoke at the fundraiser and referred to the Jewish and Christians protesters outside of the event as “hateful”, simply because they were anti-terror.

It was such an honor to attend the “Dear Gaza” fundraiser, thank you Karmel and all the organizers for your tireless work in support of Palestinians. I know Palestinians are resilient people, hateful protesters nor unjust occupation will dim their spirit. #insolidarity pic.twitter.com/5uIx6dk6Fq

Omar, who is a Muslim immigrant from Somalia, has a documented history of ties to terrorism and organizations that have openly embraced and endorsed other terror tied candidates.

Along with supporting HAMAS, Omar has publicly expressed her Jew hatred and desire to eradicate the state of Israel.

During a joint campaign event with Palestinian Congressional candidate Rashida Tlaib, Omar and Tlaib were both asked whether they would stand up for Jewish constituents and whether they would denounce HAMAS. Both Omar and Tlaib refused to answer the question and refused to condemn Hamas. Angered by the question from this Jewish journalist, Tlaib grew violent and assaulted the journalist on camera, prompting the journalist to file a police report.

Violence appears to be a theme at Omar’s events. During the HAMAS fundraiser, one of the male attendees violently assaulted a Christian woman who was protesting outside of the event. The man attempted to steal the woman’s phone, and screamed in her face, prompting her to file a police report.

Even more disturbing is the fact that after the woman was assaulted, Sheila Delaney, who helped organized the terror fundraiser and serves as the Events Manager for Westminster Presbyterian Church, helped the man who assaulted the woman by allowing him inside the church when he attempted to evade the police after the woman said she was filing a police report.

This is Sheila Delaney.

Yesterday Ilhan Omar spoke at a fundraiser for Hamas which Sheila participated in and helped organize.

When Minnesota voters showed up to protest and decry the fundraiser for a terror org that kills innocent Jews and Christians, Sheila was laughing. pic.twitter.com/QvsEVM3qaB

When contacted with a request for comment regarding why Westminster Presbyterian Church hosted a fundraiser for a terrorist organization that is known for murdering Jews and Christians, Rev. Dr. Timothy Hart-Andersen, Senior Pastor, said, “no comment”, and hung up the phone.

If you would like to contact Westminster Presbyterian Church and ask them why they hosted a pro-HAMAS fundraiser, you can do so here:

Laura Loomer is a conservative investigative journalist and activist. Originally from Arizona, Laura began her career working as an undercover journalist for Project Veritas from 2015-2017. She covers politics, anti-Semitism, immigration, terrorism, the Islamification of the West, and voter fraud. Loomer’s investigations have been broadcasted on every major national mainstream media outlet in the United States, as well as many international publications. Support Laura Loomer’s Independent Journalism here: PayPal.me/lauraloomer
Patreon.com/lauraloomer