Hamas is preparing for war, Israel security forces have reportedly said, bolstering its forces significantly over the past few weeks, as the humanitarian crisis in Gaza worsens and reconciliation talks with the Palestinian Authority have broken down.

That assessment is not new, IDF sources told the Haaretz daily Friday, having warned repeatedly that the situation is more likely to escalate than to calm down. However, recently the army noted that the terror group appears to actively be readying itself for a limited conflict with Israel. It is only a question of when Hamas will decide to go to war, the paper said.

Hamas, which rules the Gaza Strip and actively calls for Israel’s destruction, has increased the pace of rioting and demonstrations along the border with Israel, and created new units tasked with sustaining the friction along the border fence including during nighttime and early morning hours.

The Times of Israel reported on Thursday that almost every evening, thousands of Gazans now gather for violent demonstrations, at the Erez crossing and elsewhere, as part of Hamas’s attempts to signal to Israel that it wants an economic solution to the Gaza Strip.

The Egyptian efforts to reconcile Hamas and Fatah have not borne fruit at this stage, and the possibility of a long-term ceasefire with Israel has apparently fallen off the agenda, Thursday’s analysis by ToI’s Avi Issacaharoff said. The economic situation has once again reached an unprecedented low, stoking fury among Gazans that is being directed against Israel, the PA, Hamas, and even Egypt.

Hamas recently conducted safety drills to protect civilians in the event of war, and continues its military drills — two further signs that it is preparing for war, Haaretz reported.

Israeli officials believe there are two main causes pushing Hamas toward military escalation, the newspaper report said: The failed reconciliation talks with PA President Mahmoud Abbas’s Fatah party, which controls the West Bank and has maintained a chokehold on Gaza’s finances in a bid to pressure Hamas to cede control of the territory, and the ongoing humanitarian crisis of the enclave under the Israeli-Egyptian blockade, made worse in recent months by the US slashing its aid to the PA and its funding for UNRWA, the UN body responsible for the welfare of Palestinian refugees, which funds schools and major relief projects in the Strip. Israel maintains the blockade to prevent Hamas importing weaponry. 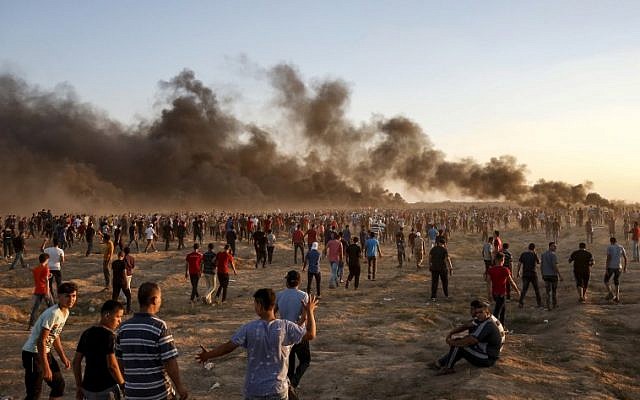 Palestinian protesters gather during a demonstration along the Israeli border fence east of Gaza City on September 21, 2018 as smoke plumes billow from burning tires in the background. (AFP/Said Khatib)

IDF officials believe Abbas is now actively pushing Hamas to go to war against Israel, according to Friday’s Haaretz report. Reconciliation talks between Fatah and Hamas broke down in recent weeks over Abbas’s insistence that the terror group hand over all its weapons to the PA’s security forces. It has also demanded that Hamas return all public lands taken in Gaza, that Fatah members be returned to their governmental roles in the coastal enclave, and the end of Hamas’s religious legal regime. This list of demands seems hand-picked to ensure Hamas continues to refuse them, thus stymieing any progress toward reconciliation.

Abbas, in his speech to the UN General Assembly on Thursday, directed some of his toughest comments at Hamas, including an explicit threat to “remove all responsibility” from Gaza if Hamas does not agree to reach a deal with the PA.

Israeli officials also believe Hamas views war as a solution to Gaza’s humanitarian crisis, which is putting growing pressure on the group from the disgruntled residents of Gaza, the Haaretz report said. The crisis, driven by sky-high unemployment as well as severe shortages of fuel and potable water over many hours each day, is set to worsen as UNRWA struggles to find donors to replace the US. About half of the population relies on food provided by UNRWA. Some 300,000 students study in UNRWA-funded schools, which employ some 18,000 teachers and staff, making the organization one of Gaza’s major employers. By October there will be no budget left for much of this activity, Haaretz said.

Without funding for UNRWA, Israeli officials said according to the paper, war is all but inevitable.

The population of Gaza is beginning to lose faith in Hamas, and Israeli security sources say that if free elections were held today in the Strip the terror group would lose its power, according to the report. Therefore Hamas is attempting to redirect public anger at Fatah and Israel.

A Palestinian official in the Strip told The Times of Israel this week that for the residents of the coastal enclave, a war between Israel and Hamas “is not a question of if, but when.”