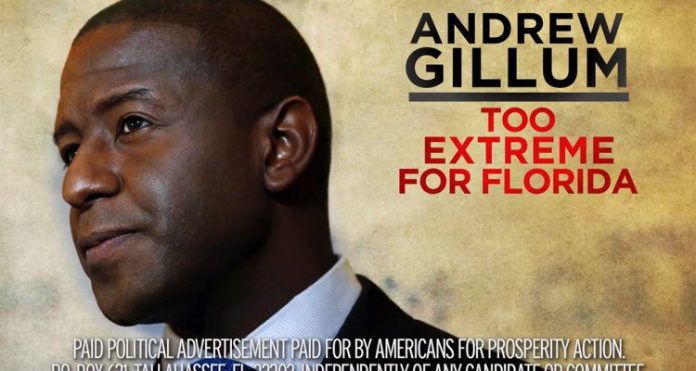 The Koch-backed political committee Americans for Prosperity Action, or AFP-Action, announced Wednesday that it was launching a digital and direct-mail campaign attacking Democratic gubernatorial nominee Andrew Gillum over his “record and extreme agenda.”

“Andrew Gillum’s agenda is too extreme for Florida,” said AFP-Action senior adviser Chris Hudson. “His plan for the economy? Raise taxes that hurt Florida businesses and families. His plan for health care? Take away your health insurance and cut access to Floridians on Medicaid by expanding a broken system. His plan for education? Destroy successful programs that give students a hand up in achieving their goals. We can’t afford Andrew Gillum.”

AFP-Action did not include any of the direct mailers in its announcement, though it did link to the digital ad. The 30-second spot, titled “Andrew Gillum is too Extreme for Florida,” starts by saying “Florida is on the right track, good jobs and a strong economy,” before pivoting to hammer Gillum.

“Andrew Gillum’s extreme agenda could put it all at risk. Gillum supports government-run, single-payer healthcare that could prevent access to quality, affordable care,” the ad narrator says. “He’d end successful education programs for one-size-fits-all mandates that hold our students back.

“His plan to pay for all these promises? More taxes on hard-working families and local businesses. Andrew Gillum is too extreme for Florida,” the ad concludes.

The ad buy comes after AFP-Action has attacked Gillum in press releases for his health care positions and for a statement he made during an appearance on Facing South Florida that said the state’s low unemployment level was due to individuals being forced to work “two to three jobs to make ends meet.”

The new ad buy comes a day after AFP-Action announced it was launching a “significant direct-mail push” to oppose U.S. Sen. Bill Nelson in his re-election bid against Gov. Rick Scott.

Gillum, currently the mayor of Tallahassee, has indicated that he would raise taxes on businesses. His plan would increase Florida’s corporate income tax rate from 5.5 percent to 7.75 percent in order to pay for his proposed $1 billion increase in the education budget.

Republican nominee Ron DeSantis has dogged Gillum for that position on the campaign trail, most recently when he was accepting the “firm endorsement” of the Florida Chamber of Commerce last week.