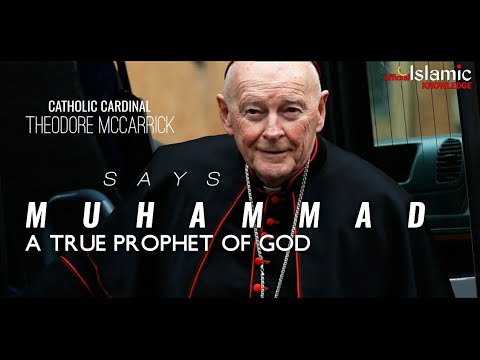 “We know what Islam is and we know what lessons Islam is going to teach all of us,”  former Cardinal Theodore McCarrick declared reassuringly  on May 31, 2015, at Crystal City, Virginia’s Hyatt Regency Hotel. McCarrick’s comments before an Islamic Society of North America (ISNA) interfaith conference recall how this now disgraced Catholic clergyman led for many years the Catholic Church’s often horribly misguided dealings with Islam.

McCarrick offered dubious adulation for his ISNA hosts. “I have been privileged to know ISNA for 20 years and to see the growth and development of this extraordinary instrument of understanding, instrument of cooperation, and instrument of beauty.” Yet federal courts judged this Muslim Brotherhood (MB)-derived organization as an unindicted co-conspirator in 2007 in American history’s largest terrorism financing trial, given ISNA’s links to the MB terrorist organization Hamas.

McCarrick specifically praised ISNA leaders such as Mohamed Magid, Sayyid Syeed, Muzammil Siddiqi, and Azhar Azeez as “so much a part of America and the ummah is growing.” Their radical backgrounds notwithstanding, McCarrick stated that “here it is thoroughly American, here it is thoroughly patriotic,” and that ISNA fulfilled a national need for an “important, clear patriotic American voice from the Muslim community.” “ISNA is very important to me, because it is very important to my country, your country, our country,” he stated, yet ISNA’s latest 2018 conference featured a rogue’s gallery of anti-Western, anti-Israel speakers.

At the 2015 conference McCarrick expressed a questionable certainty that atrocities by jihadist groups like the Islamic State distorted Islamic doctrine. ISNA must be a “strong, and a clear, and a courageous voice” and declare for Muslims that “that’s not really us, that’s not what the Quran says, that’s not what the Prophet, peace be upon him, is teaching,” he stated. As is ubiquitous for Islam apologists, he distorted Quran 5:32 to claim that “these are the quotations that we need to underline, because these are the quotations which define ISNA today. Not the misquotations, not the bad translations.”

By contrast, McCarrick noted how he has talked around the world about a 2005 fatwa from ISNA’s Fiqh Council of North America (FCNA) against terrorism, notwithstanding FCNA’s radical ties. This fatwa “was one of the high moments in the life of American Muslims” and was “such a courageous thing” that showed the “ummah in America standing firmly, standing together and saying, this is what we believe and it is true Islam.” Meanwhile, the

McCarrick worried that this fatwa “has really never received the publicity it deserves.” Yet analysts such as Judea Pearl have noted the loopholes in this weak document that could allow for jihadist killings, including the murder of his son Daniel Pearl in Pakistan. As Jihad Watch’s Robert Spencer has noted, phrases such as “civilians” and “innocent lives” in the fatwa “are in fact hotly debated terms in the Islamic world.”

Nonetheless, McCarrick before ISNA remained unshaken that “who you are and what you believe are very beautiful things.” He lauded past “great Muslim leaders who fearlessly and graciously and wisely defended their people, defended ISNA” against “Islamophobia.” He hoped that young American Muslims would “take their definition of Islam from ISNA, and not from ISIS,” as ISNA had the “true vision of your community, the true vision of your religion.”

McCarrick’s 2015 ISNA appearance was merely one manifestation of this fixture at Islam-pandering activities in Washington, DC, and beyond. He was a prominent ally of Georgetown University’s Saudi-funded Prince Alwaleed bin Talal Center for Muslim-Christian Understanding (ACMCU). There he associated with ACMCU Islam-apologists including Professor John Espositoand Jordan Denari Duffner. Along with the ACMCU, he promoted the Islamophile propaganda films of Unity Productions Foundation, including The Sultan and the Saint.

McCarrick was also involved in the 2016 Marrakesh Declaration. He described this as a “truly a great document” for its religious freedom appeal on the basis of the seventh-century Medina Charter from Islam’s founding period. Yet more critical observers such as the Iraqi-American analyst Nibraz Kazimi have dissected the multiple problems with McCarrick’s reliance upon this historically questionable charter as a source of Islamic tolerance.

Beyond the Marrakesh Declaration, McCarrick has affiliated with multiple initiatives led by the Mauritanian-born Sheikh Abdullah bin Bayyah, such as the 2018 Alliance of Virtue. Bin Bayyah’s multiple radical pronouncements in favor of jihadists fighting Israel or American troops in Iraq belie recurring efforts to present him as a Muslim “moderate.” Yet McCarrick in 2016 praised Bin Bayyah as the “prophet of light and the prophet of reason” with the “correct understanding of Islam,” while others in America want to “canonize an Islamophobia.”

McCarrick accordingly epitomized the benign outlook on Islam embraced by Pope Francis’ papacy to the concern of so many. McCarrick himself praised Pope Francis during a panel at the 2015 Reviving the Islamic Spirit conference in Toronto, Canada, an annual event that has a long historyof radicalism. As a counter to “stupid Islamophobia,” McCarrick recommended that Muslims “listen to Pope Francis and feel better about yourselves.” With the scandals of McCarrick and others embroiling Pope Francis, it is questionable just who is listening to the Catholic Church now.